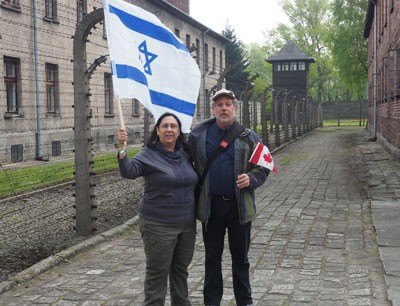 Last Yom HaShoah, my wife Dena and I attended the March of the Living (MOL), whereby the world’s Jewish community walks the three kilometre distance from Auschwitz to Birkenau. We had sent both our son Alon and daughter Shanee on this important learning journey, one that normally follows up with a Yom Hazikaron and a Yom Haatzmaut visit to Israel. However, we felt it more important to send them first – we could wait. When Hamilton school trustee and local NDP candidate Alex Johnstone said, during the last election, that she had no idea what Auschwitz was (Johnstone subsequently went on a Shoah trip to Poland), we realized that we, too, needed to be vocal witnesses to the evidence of the Shoah in order to report back to the Canadian community, at large.

It was a very moving moment, for both of us. My grandmother, German born and raised, was murdered in one of these very crematoria. This was the closest I would ever come to walking in her footsteps, of honoring her memory.

In a way, the MOL experience for me was something I started nearly 10  years ago. A German newspaper reported that a mikvah had been discovered by archeologists in the basement of a rural house south of Frankfurt, in Germany. That house was my grandfather’s house, and shortly after, I summed up some courage, rented a car in Germany, and found myself knocking on the owner’s door. That same weekend, I visited the Jewish cemetery of my family, which had a history in Germany for more than 200 years. I took some stones from that cemetery back with me to Canada. When my uncle and later my own father were buried, I placed some of those stones in their grave. It was, sort of, a completion of the historical cycle, linking them with all our other departed relatives. With just a few stones left, it was my privilege to bring some of those stones to the final resting place of my murdered grandmother, and we were both honored and proud to be able to march with the adult Canadian group.

There were two things that I found most surprising in the MOL. First, was the extraordinary range of Jewish communities making the walk — more than 10,000 participants from 52 countries were represented. Ours was a spontaneous outpouring of community consciousness to ensure this would never happen again.

The second surprising item was totally unexpected. Our children had reported receiving numerous dirty looks in Poland, and got the impression that Jews were still a very unwelcome presence. Imagine our surprise, then, when at the MOL, we were met by contingent after contingent of young and old Polish citizens, holding signs of sympathy and support. One young Pole handed me a memorial tag, and showed me the picture of his own grandfather, who had been interned at Auschwitz, but somehow survived.

It should be remembered that the Polish national rhetoric after the Second World War under communist control was historically that Poles were murdered in Auschwitz, not primarily Jews. In fact, the first monuments made no mention of Jews at all. As the Polish national museums attest, periodic pogroms were launched against Jews regularly before the war, shortly after the war, in 1967 after the creation of Israel, and again in the 1980s.

There are very few Jews left in Poland, although the number seems to be growing, particularly by the younger generation who have started to recognize hidden Jewish ancestry in their families. We spent a wonderful day with one young woman who self-identified as culturally Jewish. Her recognition of her Jewishness was by her own darker complexion, and by the fact that her grandmother was mysteriously only baptized at the age of seven right after German occupation (her assumption was that her grandmother was a Jewish child adopted by Christian Poles).
Poland now sees itself as a full-fledged European country. The Jewish culture festival in Krakow, annual since 1988, celebrates Jewish culture and music with 30,000 attendees. Krakow has numerous living synagogues. Warsaw has its own active JCC and synagogues. The POLIN Museum of the History of Polish Jews, which opened in 2013, is one of the most impressive Jewish museums we have visited world-wide. Strikingly, as with the Jewish Museum in Berlin, this is a museum designed primarily for non-Jews--and we observed hundreds of schoolchildren attending the exhibits.

Poland was an amazing experience. We found the people very friendly, even when they knew we were Jewish. The food we ate was surprisingly good. The infrastructure solid (Dena remarked that we, in Canada, should learn how to build roads from the Poles!)  All in all, the trip was very moving, and it also highlighted the importance of recognizing the following verse in Deuteronomy:  “The fathers shall not be put to death for the children, neither shall the children be put to death for the fathers: every man shall be put to death for his own sin.”