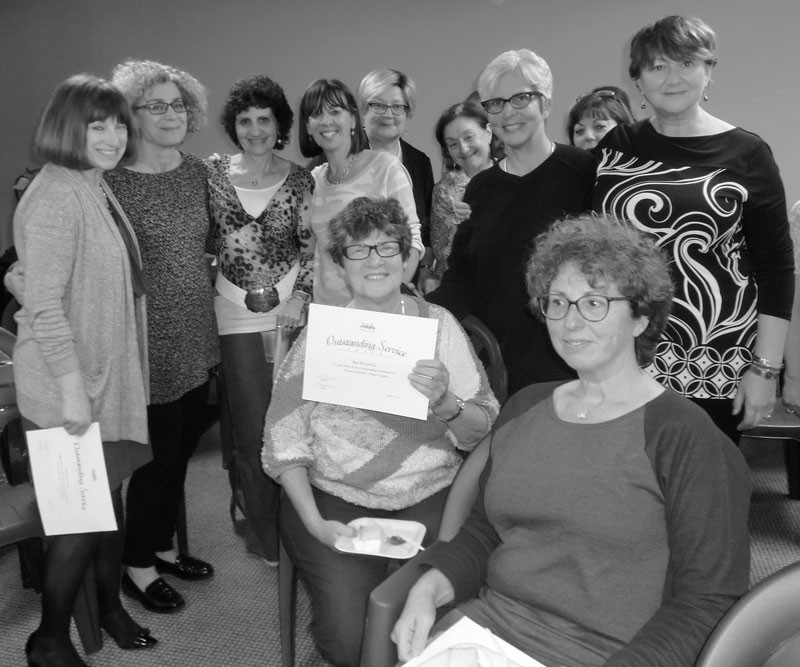 The rain was relentless as we gathered in the party room of Annette Richardson’s condo. A lovely sukka, erected just outside the patio doors, was inaccessible in the downpour. Members of the Nitsan chapter of Na’amat Canada each brought a dish or drink to share along with warm smiles and enveloping hugs. It was the opening meeting of Na’amat’s 35th year in Hamilton as well as a celebration of Na’amat Canada’s 90th year. As we enjoyed the potluck dinner, the room was vibrant with laughter and chatting, creating a very congenial ambience.

To a round of applause, Anna Shkolnik and Ronit Mesterman, the new co-presidents, welcomed new members and announced that Kim Thúy, award-winning author of Ru and Mãn, would be this year’s author at our annual luncheon on April 5, 2015. Also, the very successful Wellness Day would be repeated in 2016. Our year was starting on a positive note.

With flair and good humour, Susan Roth emceed the rest of this special meeting, the recognition of the Nitsan women who have been members for 20 or more years. Judy Caplan recalled meeting Norma Barkin in Toronto more than 35 years ago, “She asked me for help to initiate a Na’amat chapter in Hamilton. I gave her the names of women who I thought might be interested.”  Norma nurtured the new Nitsan group for several years. Patricia Eppel remembered being the first co-president with Rivka Shaffir ‘ah and, from that group, creating a supportive community for herself and her young family. Agi Meinhard added, “Besides the worthy cause and the pride I have in what the organization does in Israel, for me, Na’amat also stands for friendship and fun.”  Woman after woman was recognized and shared special memories of Na’amat and the important role our chapter has played in each of their lives.

Dessert, coffee and more schmoozing followed. Na’amat Hamilton is strong in its fundraising for Israel but equally dedicated to its members’ well-being. The women of Nitsan have all felt the profound support of the group at difficult times in their lives. Nitsan offers stimulating monthly programs and is always open to new members.  For information about our group or upcoming meetings you may write to: mesterm@mcmaster.ca or annashkolnik@hotmail.com. The evening ended with long goodbyes and then we stepped out into a dark but thankfully dry night.