I think of Kelev, roaming the streets of Winnipeg with the local kids, as a sort of canine patriarch: legendary ancestor of the dogs I’ve known.

The dog I knew best, if not quite the best dog I’ve known, was a scoundrel named Toby. I use the term “scoundrel” with affection, but also as an honest description.

Toby was cute, almost absurdly so; small and puppy-like into his golden years, with silky Blenheim fur, a lolling tongue, and exquisitely floppy ears. But strangers drawn in by his cuteness were rebuffed by a twitching upper lip, followed by a snarl, followed sometimes by worse. When kids asked, “Can I pet your dog?” we, his walkers, had to sorrowfully respond with a no.  At best, in his later years, he would sullenly endure a stranger’s stroke.

Toby jumped on the table and ate my sister’s Passover dinner twice in a row. He left strategically placed excrement as revenge for us leaving him alone too long. He tore apart my guide to Super Mario Brothers 3. He humped the side of a chair long after being neutered. He ran down the street when we opened the door. He brought a dying bird into the house. He snatched used pajamas, towels, and clothes, and hoarded them under my parents’ bed. He ate toothpaste and tinfoil.

But Toby stole our dirty laundry because it smelled of us. As bad as he was in the objective sense of being a badly behaved dog, Toby was a loving creature. He cuddled with us, he howled with us, he licked us, and although he barked and raged at our guests, he did so to protect us, even if his intent was woefully misguided and his actions wholly ineffective.

When my dad got home at 4:30 in the morning after working in the hospital all night, Toby was there to greet him. When I was lying on the mudroom floor, nursing a broken hip, Toby was there to comfort me. He peed out of happiness when we came from home from a trip.

Milan Kundera wrote that dogs were never expelled from paradise. Even when Toby was bad, which was often, he was bad in an innocent way. He made business on my parents’ bed because he didn’t want us to leave him; he jumped on the kitchen table because he wanted to join our holiday dinners; he brought a dying bird home because he wanted to give us a present; he humped the side of a chair because . . . well, you can’t spin everything.

I see a “Toby”—a Cavalier King Charles Spaniel (a breed which, contrary to Toby’s example, is supposed to be easygoing and friendly to strangers)—on the streets of Boston sometimes, and I’m momentarily taken back home. I smile and think of all the wonderful and terrible things he did. More than that, I think of where he did those things—my family’s old, now-sold house in Hamilton, each room alive with blessed memories—and how great a part of it he was.

I have an apartment now, and fish. But I don’t really “have” an apartment. I’m renting one, alongside a host of anonymous strangers. And as much as fish are fun to watch, and livelier than plants, they don’t greet you or sit on your lap or steal your pajamas. I’m not home yet, in other words.

I’m wandering, dog-less, in search of a place and a kelev I can call my own; hopefully one that is as full of love, if not as full of trouble, as Toby.

Ben Shragge, currently living in Boston, is the digital editor of the Hamilton Jewish News. 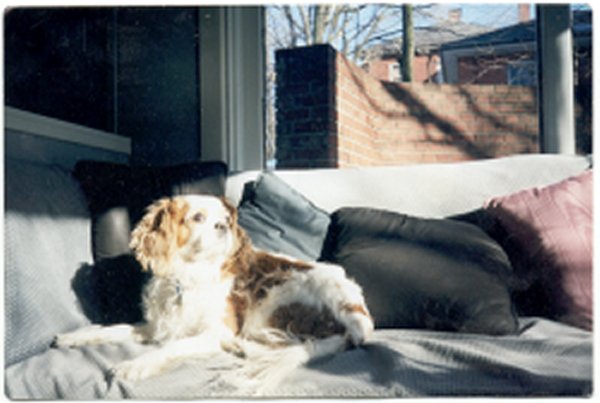