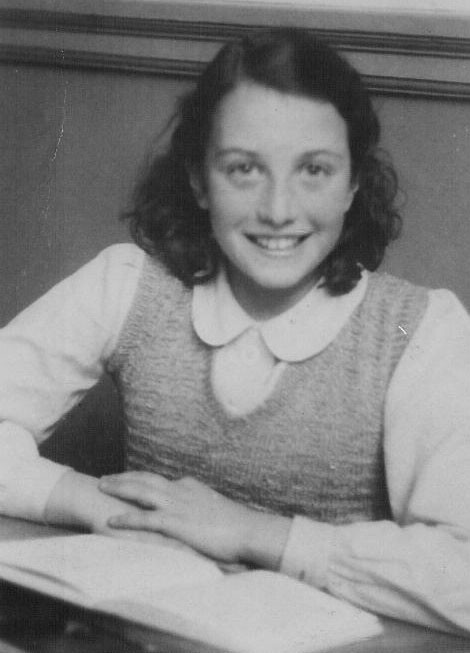 ​Growing up in England, with parents who both rebelled against being Jewish, although I knew I had relatives who had been in the Holocaust, I was not really aware of my history. I moved to Canada in 1973 and met Peter Smurlick when we both worked at The Banff Centre. Peter was the first Jewish man I had dated. We married in 1983 and our son Daniel (D.A.) was born in 1984. We moved to Hamilton in 1987 and soon thereafter I became involved with Hadassah-WIZO, and was sent to Israel in 1980 for an international young leaders’ conference. That was an eye opener for me and I suddenly wanted to know more of my Jewish heritage. I sourced a paternal family tree and saw Nanette’s name amongst other Dutch relatives. By this time, Nanette had been living in Brazil for many years.

Through some coincidences, I learned that a relative, Nanette, was one of Anne Frank’s friends! For several years, Nanette, husband John (in Sao Paolo) and I exchanged Yom Tov e-cards, basically our communication.

That changed after seeing a video “Childhood friend tells of last days with Anne Frank” — it was my relative! I emailed Nanette, and sent the link to my English cousins. Nanette wrote that her mother and my paternal grandmother were cousins, and that Nanette and I are second cousins.

The following is from her 2009 presentation to Chapel School (a Sao Paulo Catholic school), and from her opening the Anne Frank exhibit (Calgary):

I was born in Amsterdam, Holland into a happy, upper middle class Jewish family. My father was a bank manager of the Amsterdamsche Bank. In autumn 1940, the Nazi occupation demanded all Jewish civil servants/bank employees be dismissed. Due to my father’s position he had to ask for his own dismissal for the “well-being” of the institution. In March 1941, we had to register with the Jewish Council, denoting my four Jewish grandparents. We did not know it then, but this became our death warrant.

Anne Frank’s family story is part of the fate of the Dutch Jewish community. However, Otto Frank had time to prepare the hide out, the means to support his family and people of his company willing to help while in hiding.

I first met Anne in October 1941, at the Jewish Lyceum in Amsterdam, one of 25 schools established to accommodate Jewish students, no longer allowed to attend normal schools. Of the 30 students in my class the first year, only 14 remained for the second year. The Lyceum functioned until September, 1943, when Holland was considered to be free of Jews. I was present at the birthday party in June 1942, when Anne first got her diary. She wrote in her diary that I gave her a brooch for that birthday. When Margot had to present herself to the authorities in July, 1942, meaning deportation, Otto decided to go into hiding immediately, because all members of the family would be hostages. They left a rumour that the family had fled to Switzerland, but when I met Anne in Bergen Belsen, she told me what had really happened.

I first saw Anne through barbed wire in January, 1945 but could barely recognise her. Like me, she looked like a walking skeleton. In February I found that the barbed wire had been removed and went to find her. Anne was still hopeful that she would be able to use her diary as the basis of a book she wanted to write after the war. We had last seen each other just before the family went into hiding in July 1942 and the shock of seeing her in this emaciated state was indescribable.

After liberation, I contracted typhus and later that year I went to the provincial sanatorium in Santpoort, remaining for three years to recover from tuberculosis, quite common after the concentration camp.

Otto Frank wrote to me on October 29th 1945, asking whether I was allowed visitors, as he wanted to know what I could tell him about his daughters. I replied that there was a girl in hospital, in the bed besides mine, who had been with his daughters ever since Westerbork. There was also another girl in the bunk above his daughters, also in the same ward with me. I told him that my friend had gone with his wife and daughters to Birkenau and that Anne and Margot had arrived in the beginning of November in Bergen Belsen. My friend got to Bergen Belsen in January, 1945, telling the girls that she had spoken to their mother in Birkenau. This had cheered them as they had had little hope their mother had passed the selection where they were split up from her.

When Mr. Frank visited, he said he was thinking about publishing the diary. In 1947 the diary was published and he sent me a copy of the first edition published on newsprint, the only kind of paper available. Unfortunately the book, given in safekeeping to my uncle, was never returned. When I read it I was really touched, feeling very closely connected to her story.

Anne was a girl like all the others I knew. While living with my aunts in London, corresponding with my future husband who went to Brazil to live with his family, he wrote in 1952 that reading Anne’s diary, he feels he was hearing me speak.

In September 2001, at a Jewish Lyceum reunion, I met students I hadn’t seen for almost 60 years. Some survivors didn’t attend, finding it to be too emotional; others, like me, came from abroad. Most of the survivors of my class keep in touch occasionally. For this occasion I contributed a copy of my picture taken in the same place as the one of Anne in the diary. This picture is now in the Jewish Historical Museum in Amsterdam.