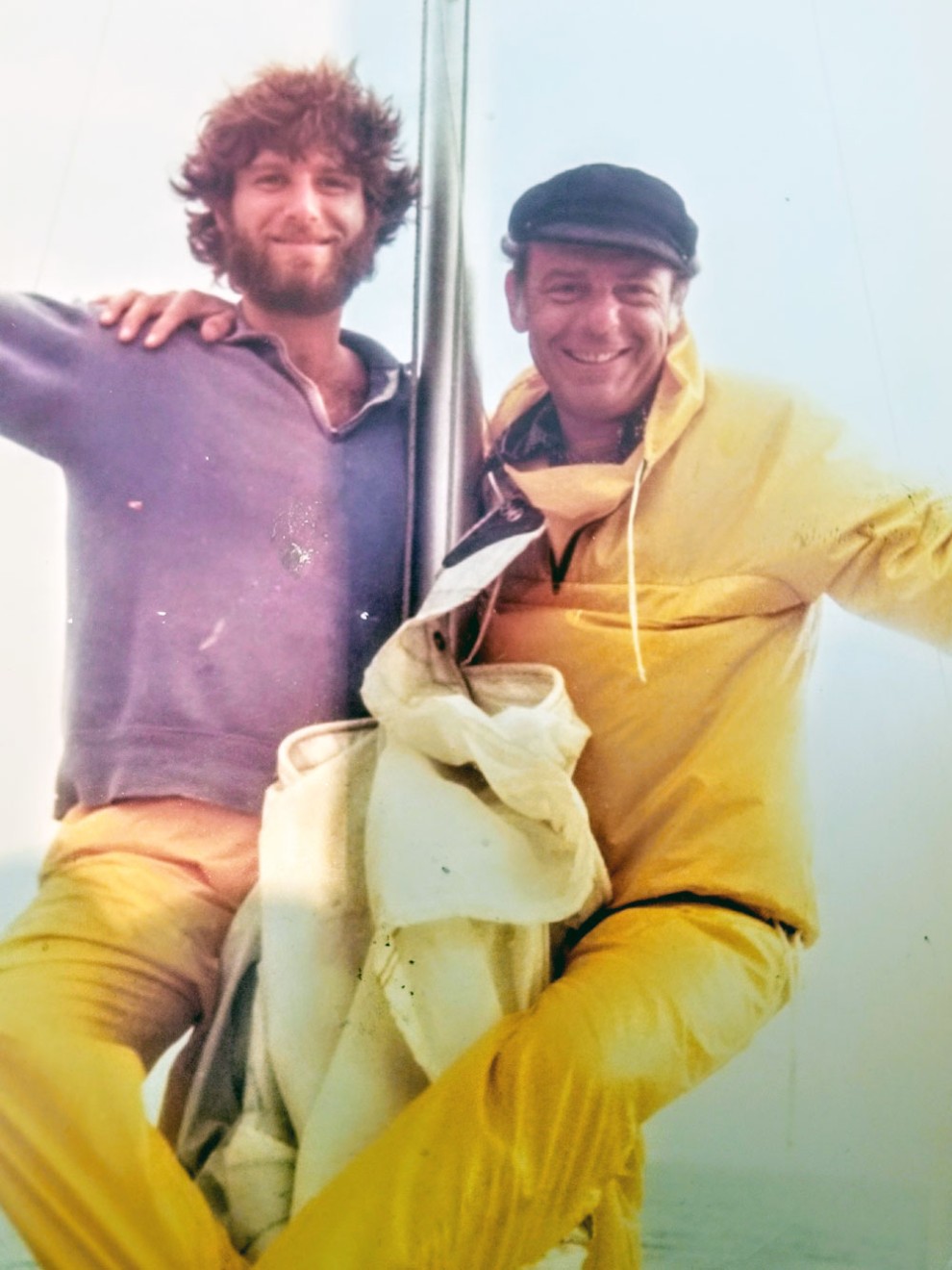 Considering the length and breadth of one person’s life is a tricky business, particularly when the person in question is your father. My father, Saul Eisenberg, or Sonny as many of his friends called him, was a multifaceted man and more than just a father; he was my confidante and best friend.  My long standing nickname for him was Boogie, and I of course became Moishe Ben Boogie.

Growing up in the fifties and sixties when many of my friends’ fathers seemed somewhat distant or remote from the joys and trials that formed their kids’ lives, my dad and I relished and valued our time together. Whether it was working at his Liberty House furniture store, horseback riding, or sailing on the myriad of boats that he owned with his best buddy Wilfred Gerofsky, Dad taught me the true meaning and importance of both work and play.

Dad knew the meaning of hard work from shining shoes and selling soda pop at ten years old to help his family in the Bronx of the late thirties. When he moved to his beloved bride Mollie Wright’s hometown of Hamilton, he encountered what it meant to write “Jewish” on job application forms and the resultant lack of work. Play came naturally to dad and it was this simple yet unparalleled gift he imparted that lends joy and meaning to every aspect of my life and relationships.

It was also this attitude towards work and play, and understanding our short time here on earth as a balancing act between responsibility and celebration, that helped both my father and me embrace his decision concerning medically-assisted dying last year. It allowed us to make peace with saying goodbye, rather than clinging selfishly, and smiling in the knowledge that life had been one exhilarating heck of a ride. After having lived 89 fruitful years, married to my dear mother Mollie for almost 60 years and then finding new love and marriage with Sandra Yanover for 10 years, Dad knew a bit about how he had been blessed and the manner in which he wanted to say farewell.

Eight months after having been diagnosed with lung cancer and enduring surgery, various other treatments and debilitating pain, the eternal optimist and fighter begged his children and Sandra to let him die peacefully and with dignity at home in the manner which he chose. As each of us looked into his pleading eyes and our own broken hearts, we gracefully granted the man who had given us so much this final wish.

We were fortunate to have dad’s family doctor, Leslie Solomon, care for him with great skill and dedication through the trials and tribulations of cancer treatment.  When Dad told his doctor that he’d had enough, Dr. Solomon referred him to Dr. Shelly Sender of Hamilton, a tremendous source of knowledge and support for Dad and our family. She confirmed that Dad’s condition placed him within the legal guidelines for medically-assisted dying and that he was making a fully informed decision, free of doubts, undue pressure, or confusion.

She also assured us that there were no hard and fast rules concerning the mood or spirit of what we were planning and that it should reflect our priorities and values.  Dad liked her immediately, as she was also originally from New York, not to mention her patience and genuine interest in Dad’s love of a new audience for the old stories we had heard over and over.

Rabbi Jordan Cohen’s sage advice, kindness, support and understanding reassured me that my Jewish roots were there to help guide me through a challenging and emotional time. Our United Hebrew Memorial Chapel was there for us and Hamilton’s Jewish community is undoubtedly grateful for the respectful and compassionate work they do.

I was also comforted in the knowledge that my sister, who lives in Israel, valued the opinion of an Orthodox Rabbi and scholar and was told that while Orthodox Judaism’s focus on the sanctity of life is at odds with assisted dying, love and respect for one’s parents and their wishes is also fundamentally important. While I found this to be a nuanced and thoughtful view of a complicated issue, I think my dad embodied the Halachic principle of the sanctity of life through the joy with which he embraced each and every day. My father was always the captain of his own ship and would retain that position with dignity and strength until the very end, including his final voyage.

I understand and appreciate the difficulty that some in our community experience at the thought of assisted dying.  I can only say that while palliative care is a sufficient option for many, assisted dying can be a compassionate and dignified gift for those who face prolonged suffering, but who are able to make a conscious and informed decision. I am heartened by Canada’s leadership in enacting cautious yet pioneering legislation that will continue to evolve prudently, and particularly with the recent court ruling that doctors who do not want to be part of the process for either personal or religious beliefs, are still obliged under the Charter of Rights and Freedoms to refer their patients in a straightforward and timely manner to another doctor who can help.

While it is always sad to say goodbye, we chose to make my father’s final days a celebration of a life well lived.  His friends all visited and shared stories as he lay in his own bed with his loving and courageous wife Sandra doing everything possible to keep him comfortable. His children, grandchildren and great grandchildren gathered around him and took dozens of photographs as Dad entertained us all with memories, pearls of wisdom and tall tales.

On his final morning, with Sandra’s family and our family gathered together, we all raised a glass of whisky with dad intoning his favourite toast:

Soon after, Dr. Sender arrived.  She was a familiar and comforting presence as she asked dad if he had any reservations or change of heart. He said no and that he was ready.  With his partner Sandra and me holding him, and with my wife Shelli and our children surrounding us, our brave warrior calmly laid back, closed his eyes and smiled as the injections did their deed in a gentle manner.

Farewell Captain. May gentle breezes, starlit skies and God’s grace guide you as you set sail into the great beyond.