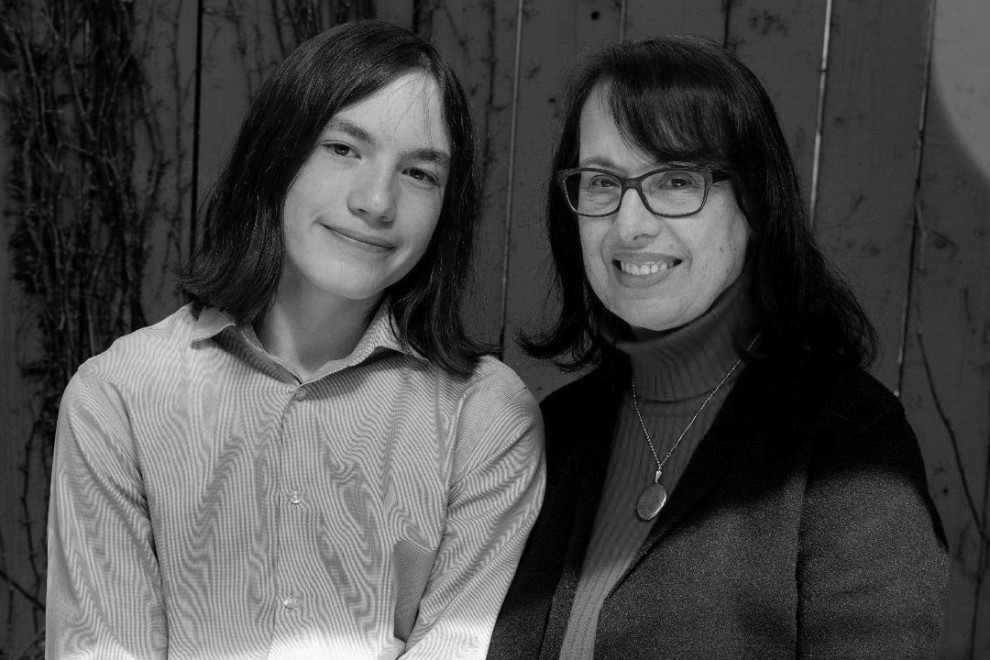 When I turned 12, I did not have a Bat Mitzvah. It just wasn’t done for girls at that time. A few years ago, I was called up for an Aliyah at the home of a friend who was having shiva services at her home for her late mother. It was the first time in my life that I had seen the inside of a Torah, and I was very moved.

This past year, when it was time for my grandson Jackson to have his Bar Mitzvah, my daughter encouraged me to make it into a B’nai Mitzvah that would include me, and so a journey began.

Jackson and I studied together on a weekly basis for many months. We discussed our Torah portion with our teacher, who encouraged us to read widely on its themes of atonement, forgiveness, sexuality and women’s place in Judaism. The study was stimulating and rewarding—more so because Jackson and I were discussing Judaism together, both in class and out.

To finally have the opportunity to read from the Torah, which was forbidden to me for most of my life, felt very special.  To do so with my grandson and to know that through him, the tradition or our people continues, gave me a sense of joy and completion.

During my D’var Torah on that special Shabbat, I told the story of another significant Shabbat in our family’s history.

My mother, Anna Constam, was a Holocaust survivor, who spent the war hiding in small villages in the south of Holland and working as a maid with a false passport. When the south of Holland was liberated by Canadian soldiers, my mother returned to her hometown only to find her parents’ home occupied by German collaborators.  She eventually made her way to her brother’s home which happened to be across the street from where Canadian soldiers  were billeted. On the day she returned from hiding, my mother, who spoke perfect English, went to ask if there were any Jewish soldiers who would like to join her family, who had only recently emerged from  hiding and the camps, for a Shabbat meal. There was only one Jewish soldier among them — and she ended up marrying him. Without that Shabbat invitation from my mother to my father, neither Jackson nor I would have been here to celebrate this incredible mitzvah.

During my research on our Torah portion, Acharei Mot, I came across an article by Lord Rabbi Jonathan Sacks called the  “Seven Principles of Jewish Leadership, in which Rabbi Sacks points to Moses and the Temple High Priests as examples of exemplary leadership.  After negotiating for his people’s freedom from slavery, Moses led the Israelites through the desert for 40 years. But after the incident of the golden calf,  Moses’s leadership abilities were truly called upon when he interceded with God to spare the Israelites from his wrath and persuaded them to restore their faith. As for the Temple High Priests, on Yom Kippur they would first ask forgiveness for their own sins, before asking on behalf of their family members and the community.

Just as the High Priests asked forgiveness for themselves first, our leaders must be role models for the people they represent. Leaders must act responsibly and when they don’t, we must hold them to account. Moses was held to account for striking the rock rather than speaking to it as God had commanded. Aaron, for helping to build the Golden Calf. Neither of these leaders were permitted to enter Israel, the promised land.

The whole list of mitzvot in the Torah was a vision for the future of the Jewish people, a future to distinguish them from other nations.  A leader must have a vision for people to follow.

Today, as I think about leadership, I cannot but think of and admire Volodomyr Zelensky—an unlikely but amazing Jewish leader who is holding his country together during the Russian onslaught against the Ukrainian people. Zelensky believes in his people and in democracy,  and he inspires both them and us with his bravery and  deep commitment to freedom. With his words, “I need ammunition, not a ride,” he became a role model for righteous resistance. He is the right man for the right time, as was Moses.

Our Jewish community needs strong leaders today as antisemitism and anti-Israel sentiment gain strength. It is my hope that with our study together, Jackson will have begun on a path that will take him into leadership positions, where his insight and his caring for others will make him a role model, be it in the Jewish or secular realm.