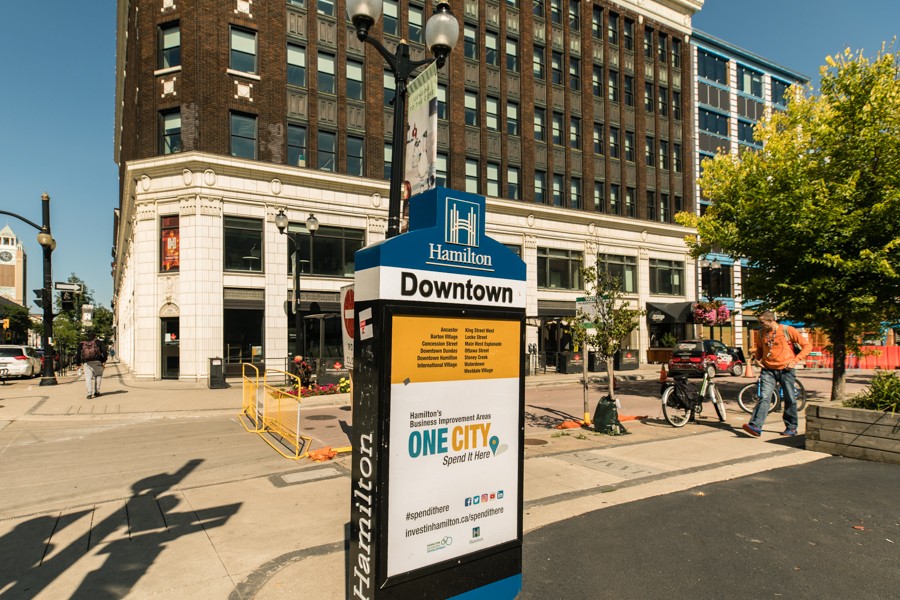 Sometime in the past 10 years or more, Hamilton discovered it had become “cool.” What that means is of course open to interpretation. Once derided as retro for its so-called lunch-bucket industrial demeanour, Hamilton is now viewed both as a cutting-edge and a less stressful place to live. But what does this mean for the city and those who have long been fighting for it and writing about it?

New restaurants, art galleries, bookstores and independent coffee shops are popping up, along with two repertory movie theatres – the new Playhouse Cinema and reopened Westdale – to boot. The Supercrawl music and arts festival planted itself firmly in the downtown core in 2009 and has reappeared every fall with its closed streets and open music stages, plus stalls selling a multitude of arts and crafts.

Further to the east, there is the conversion of the Cotton Factory, an old and gargantuan factory complex, into a creative hub of small businesses and creative activity. It is part of a larger trend to preserve and repurpose the aging and empty industrial structures that dot the city.

A major development has been the influx of former Torontonians (such as myself) who have bought homes at prices unimaginable in an overpriced GTA housing market. They are either retirees or people still working, commuting daily by car, bus or train to Toronto and back, making ties to their new urban environment rather tenuous at times.

Of course, the inevitable attention from real estate investors has led to higher prices for homes and climbing apartment rents. Hamilton is becoming less affordable for people of modest incomes, in contrast to what the city was like just a decade ago.

As early as 2005, when retired management consultant Graham Crawford returned to his hometown, he detected a new “vibrancy” in downtown Hamilton, centred around James Street North. The street had been a largely Portuguese strip with shops operating during the day, selling distinct ethnic foods like salted cod, before shutting down for the evening.

An Art Crawl was starting to happen on the second Friday of every month. New art galleries had sprung up, but the restaurants – including the street’s first coffee shop, the Mulberry, along with the building’s upstairs consulting offices – had not yet opened their doors. It was the hospitality shown by Dave Kuruc, who was already operating the Mixed Media arts supply shop at the corner of James North and Cannon, which galvanized Crawford to start his own outlet, HIStory + HERitage, devoted to the life and history of the city.

Bounce forward to 2020 and the original galleries on James Street North have closed and moved elsewhere in the downtown as commercial rents have shot up in the inevitable transformation of a destination street in a capitalistic market. Real estate investors are buying up buildings that, in a little over fifteen years, have gone up in price from $180,000 to $800,000, according to one owner of a building on the street.

One of the early adopters of James North, Dave Kuruc, has now sold his building and relocated his arts supply business to Westdale, where he and his family live. He has combined his existing business with a new bookstore, King W. Books, in a commercial space once occupied by another bookseller, Bryan Prince. If you ask him about the revitalization of Hamilton, he’ll tell you flatly that it’s over. Graham Crawford has also sold his three-storey building on James North.

Furthermore, the Artword Artbar on Colbourne Street, a hub for jazz in the city for about a decade, has closed after the owning couple decided it was time to retire and sold their property just off James North to an architectural firm. They still remain active in the cultural scene, holding events in different locations. Meanwhile, other changes are in store for James North, with new condos and offices being planned in refurbished buildings and assuredly even more sophisticated eating places.

Such things happen all the time in a vital urban centre like Hamilton and we can expect more to occur. What is certain is that a revival is continuing in Hamilton unabated and involves more than just the fate of James North or the similarly gentrified Locke Street further west. On other streets like Barton and Ottawa Street North, in other small but growing pockets like Cannon/Kensington and King East near Tim Hortons Field and even on Kenilworth, there are credible signs that the reclaiming of Hamilton is ongoing and is not neighbourhood specific.

I agree with Graham Crawford that some of the words and phrases used to describe a revival in Hamilton – now taken up primarily by the city’s economic development department and the real estate industry – are frankly over the top. The one he “hates” the most is the new Brooklyn. It is arguable that Hamilton’s American rust boom-bust parallel is more likely to be Pittsburgh, which also had a thriving steel industry.

Revitalization is also problematic because there is an implication that before the 2000s there was nothing of value in Hamilton. This discards the sense of solidarity among steelworkers in the 1946 Stelco strike, the preservation of natural areas and parks by Thomas McQuesten and Thomas Beckett, and the majestic heritage buildings downtown, which were foolishly torn down for urban renewal on what is now the Jackson Square mall starting in the early 1970s. James North in the 1920s was a lively Italian strip where people were out and about, according to Crawford.

Crawford is a Hamilton booster par excellence but he is also realistic about his city’s shortcomings, especially with the majority of elected politicians and the bureaucracy down at city hall whom he sees as isolated in their own bubble, separate from the rest of local citizens.

So, to start talking about “an urban renaissance” there is enough to make him protest. Name the issue and this local activist will speak at length on the persistence of one-way streets, the failure of city council to inform the public or the stewards of sensitive natural areas about a massive four-year sewage spill in the billions of litres into Chedoke Creek and Cootes Paradise, the intolerance of the police towards LGBTQA+ people, the hateful characters parading in front of city hall on Saturday mornings and the general secretive atmosphere and top-down attitudes at city hall, among other festering matters at hand.

What is ultimately exciting about Hamilton is the current level of political activism, reflected in an active social media and the existence of organizations like Environment Hamilton, the Hamilton Roundtable for Poverty Reduction, the Hamilton Centre for Civic Inclusion and the various tenant rights groups. There is less deference towards authority and whatever city hall or our various elites dish out.

— from Reclaiming Hamilton: Essays from the New Ambitious City

Paul Weinberg has written for  newspapers and magazines including: Canada’s History, CBC Radio News, Financial Post Magazine, the Globe and Mail,  National Post, and the Toronto Star. The focus of his interest and writing is Canadian politics, international relations and local history.