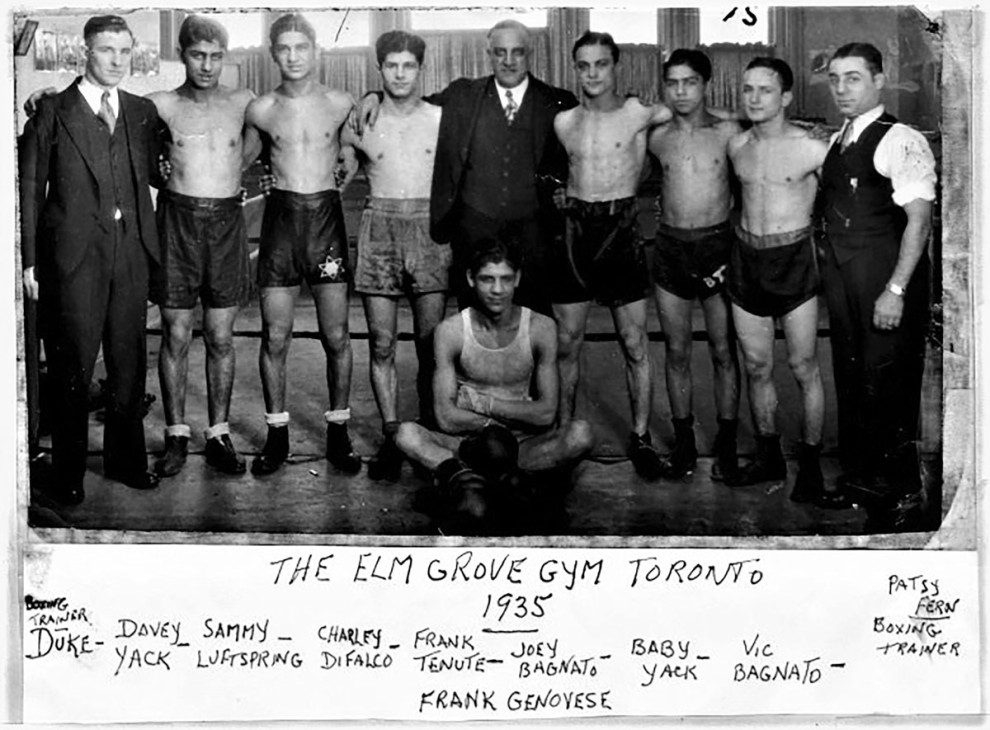 Look at the young men in the 1935 photo of the Elm Grove Gym. Arms around each other’s shoulders, Jewish and Italian boys who grew up and played together in the same downtown neighbourhood. Davey Yack, Sammy Luftspring and Frankie Genovese fought hard against each other as amateur and professional boxers. But two years before this photo was taken, on a hot August evening, they and the other aspiring boxers in the photo fought together against members of the Swastika Club and the Pit Gang in what is now known as the Christie Pits Riot. In the battle against antisemitism and xenophobia, the Jews and Italians found common cause.

When you’re in a fight, it’s good to have someone who has your back.

In 1936, a group of progressive, working-class Jews, members of the Jewish Labour League Mutual Benefit Society (later the United Jewish People’s Order) wanted to purchase a piece of land straddling the Credit River in Brampton, but the Canadian National Railway would not sell to them. They did, however, sell it to members of the Ukrainian Labour Farmer Temple Association. They in turn transferred the land to their Jewish allies who used it to create Camp Naivelt, Yiddish for “new world”—a world that presumably would not tolerate the prejudices of the old.

How about an example closer to home? From its conception in 1926, Westdale was planned as an “upscale, exclusive, white Protestant community.” Deeds to purchase land or transfer title contained restrictive covenants like this one: “None of the lands shall be used or occupied by, or let, or sold to Negroes, Asiatics, Bulgarians, Austrians, Russians, Serbs, Rumanians, Turks, Armenians, whether British subjects or not, or foreign-born Italians, Greeks or Jews.”

The court battle against restrictive covenants like this began in 1945 in Toronto when Drummond Wren, head of the Workers Education Association of Canada, supported by the Canadian Jewish Congress, began to challenge them in court. Other cases followed, leading to decisions and appeals that reached all the way to Supreme Court of Canada before the Ontario Government passed legislation in 1950 to finally make restrictive covenants illegal.

When you’re fighting against racism, antisemitism, prejudice, intolerance and discrimination, it’s good to have allies. But it’s important to be an ally as well.

As immigrant communities become established, they become more self-sufficient, more institutionally complete. The process often starts as a response to difficult conditions and lack of opportunity and acceptance. Historically, this has been the case with the Jewish community. While there is definitely an upside to “making it” and forging a strong sense of community, there can also be a downside. The danger of this kind of success lies in becoming too inward-looking. And that can be a mistake.

A community perceived to be for itself alone, may find itself misunderstood, isolated, stereotyped, mistrusted and— in extreme cases—hated. Being both inward and outward looking allows us to live in a wider community that shares the desire and the means to respect, support and sustain us all. Allyship is reciprocal. Allying ourselves with others encourages others to ally themselves with us.

How do we do this? It’s about working together. Communities can unite around shared concerns like the disturbing rise of hate, food insecurity and the need for safe and secure shelter. They can build coalitions and advocate together. Good work is already happening. A lot of important intercommunal contact takes place at the grassroots level through the work of synagogue and church committee volunteers who run local Out of the Cold programs together. Others join in solidarity in campaigns like No Hate in the Hammer. Community service organizations such as Hamilton Jewish Family Services partner in larger community programs like Hamilton Food Share.

At the organizational level, the Hamilton Jewish Federation has partnered with the Canadian Polish Congress and the Ukrainian Canadian Congress around the crisis in Ukraine. Hamilton Jewish Federation is also represented on the Board of the Hamilton Anti-Racism Resource Centre. Finally, through the generosity of the Lion of Judah’s Women Helping Women Project, the women and women-led families who reside in the Putnam YWCA affordable housing apartments will no longer experience food insecurity.

We have made a good start, but the work must go on, the connections with others strengthened.  We live in troubling times. The consequences of COVID-19, political division, geopolitical unrest and economic uncertainty have revealed strains and caused tears in the social fabric. These are conditions that have never been good for minority communities, including our own. In all times—but especially in these times—it’s good to have friends.

Harvey Starkman is a regular contributor to the Hamilton Jewish News.