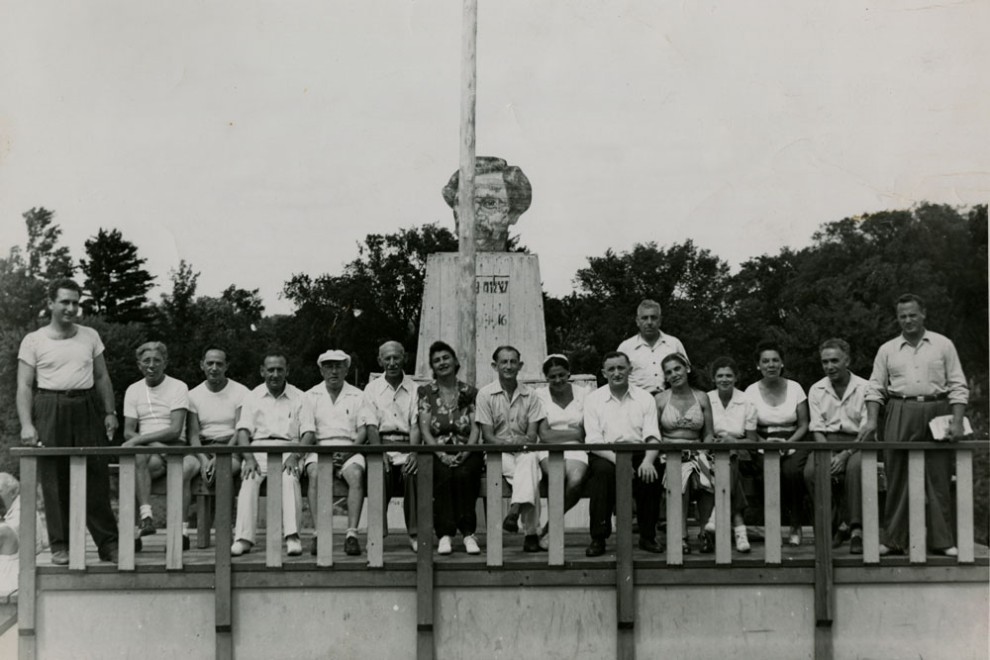 There is a delightful YouTube video you should watch. It’s called A Day at Camp Naivelt, shot in the 1940s. I’m guessing it is post war because of the joy in life and the physical energy you see in the children, young people, and families. There is no dialogue, only a banjo soundtrack. In the background of many of the outdoor shots, there is a primitive statue of the head of a male figure. Knowing what I did about Naivelt, I wanted to morph that unclear and unidentified image into a bust of Karl Marx, but it just wouldn’t work. When I asked who it was, I was told it was Sholem Aleichem.

I wasn’t surprised. Both of them belonged there.

Camp Naivelt was more than a summer camp for children. Naivelt means ‘new world’, embodying a belief that a new world could be created through human effort. It began as a summer residential colony for members of the Jewish Labour League Mutual Benefit Society, founded in 1926, which became the United Jewish People’s Order (UJPO) in 1945. The first-generation Naivelt members were for the most part unionized garment factory workers, "single- generation proletarians" who slept in tents that over time became a cluster of cottages. Camp Kinder land, the children’s summer camp, ran until 1971.

The camp itself is an hour east of Hamilton, in Brampton. The original 100-acre property that straddled the Credit River with the children’s camp on one bank and the adult colony on the other, was purchased indirectly from the CNR in 1936. I say "indirectly" because the CNR was not keen to sell to Jews. However, being part of an "international" progressive fraternal movement had its advantages: the land was purchased by a member of a similar organization in the Ukrainian community, and transferred to its Jewish owners.

Because of its Marxist-oriented progressive values, expressed through actions targeted at achieving fair working conditions and social justice for all, Naivelt was known as the ‘Red Colony’ – although I’m not sure if that was a name used affectionately by its supporters or derogatively by its critics.  Naivelt was the country retreat where people could meet, discuss, and even argue while the children absorbed values and culture through play, story, and song. That’s where Marx meets Sholem Aleichem.

While the founders of Naivelt were Internationalist and secular in belief, they remained very consciously Jewish. If one could create a new world, one could also create a new Jewish culture whose values aligned with progressive values. That new culture was known as Yiddishkeit or secular cultural Yiddishism. As in all cultures, language is the glue. At Naivelt, as in the factories where the members toiled during the week, Yiddish was everywhere. There were discussions, readings, performances, and classes for children.

Mostly there were songs. Songs like "Ale Brider" with lyrics by the Jewish socialist poet Morris Winchevsky proclaiming the brotherhood of all men, the sisterhood of all women, and the unity of all. Or songs about the dehumanizing effects of factory labour ending in lines calling for action and change like, “Wake up, working brother, wake up!” And there was the Toronto Jewish Choir, originally the Freiheit Gezangs Farein or Freedom Choral Society whose early song selections mirrored these themes. In the early 1950s, another group emerged from Naivelt: The Travellers, whose Canadianized version of Woody Guthrie’s "This Land is Your Land" celebrates inclusion, and the determination to “walk the freedom highway.”

The Naivelt of today is much scaled down from its peak in the early 1950s. For some, political convictions changed after the shattering revelations of Soviet antisemitism under Stalin. For the second and succeeding generations, education and opportunity allowed them to leave the factories and enter the middle class. For younger generations, learning Yiddish lost its allure, especially when other summer camps offered more enticing attractions. Even the scale of the camp has changed: in the 1970s half of the property was sold to the City of Brampton to create public parkland – perhaps in exchange for heritage status that protects the cottages that remain.

But the spirit of Naivelt has endured. During his lifetime, the immigrant factory worker and unionist Max Tohn grew flowers in his downtown Toronto backyard while his more practical neighbours grew vegetables. For him, creating beauty for others to enjoy was a quintessential human act, a refusal to allow himself to become dehumanized by the repetitive mechanical work he did in his factory job. You see that spirit too in the life work of people like Drs. May and Gerry Cohen who met at Naivelt. The progressive Jewish labour movement that gave birth to Naivelt is gone, but its core values of equity, inclusion, and social justice resonate still with the values of the wider Jewish community of which we are a part.

Harvey Starkman is a freelance writer and HJN contributor.