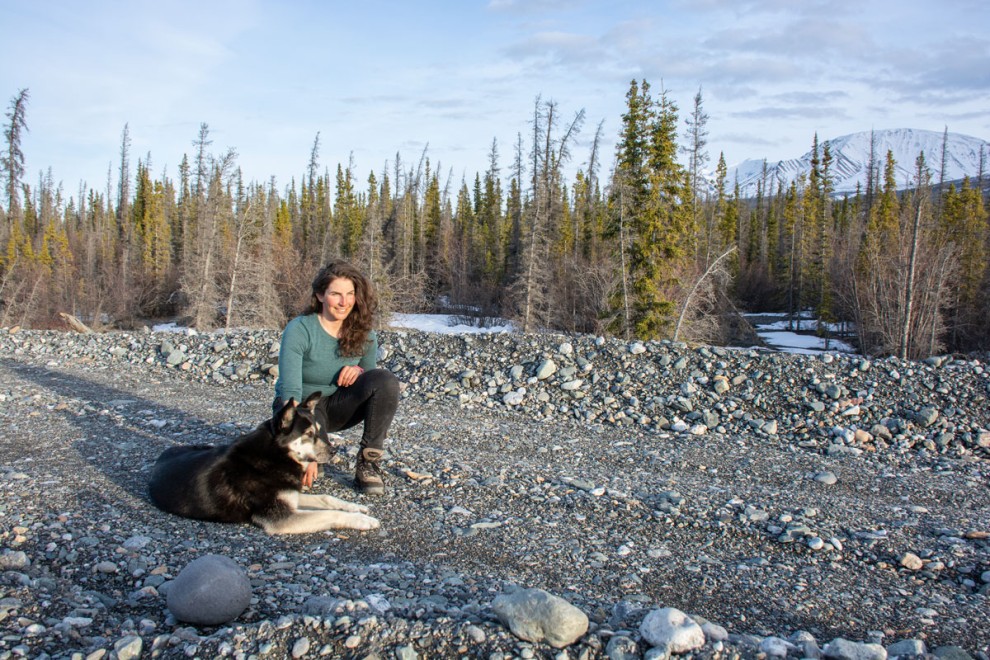 When the COVID-19 pandemic hit the globe last spring, it was a big moment of change for most people around the world. They were suddenly no longer able to go to the movies or attend big gatherings. Weddings were cancelled and funerals were held on Zoom. To most, the isolation was shocking, heart-breaking and anxiety inducing. The support system that people held on to was no longer there. For me, however, I was already living in an isolated corner of the world, in a little off-grid cabin in the Yukon Territory.

I would make the same decision again, pandemic or not, in a heartbeat. There’s nothing quite like waking up to the silence of -40ºC and knowing the only thing that will keep you warm is getting the wood yourself in the forest to heat up the cabin. It’s hard to put into words the joy I get from this lifestyle. I like that nothing is easy, that you can’t just press a few buttons to get your heat, electricity and entertainment. There’s something humbling about working hard for your basic necessities and hauling water around in blue jugs. It may not be for everyone, but I’ve heard the call of the Yukon wild, and this socially isolated life is the life for me.

To the people living south of latitude 60ºN, my family included, my life choices seem odd. The question I am most asked by those not living in the North is how I use the toilet when it’s -30ºC outside— a temperature that can be felt from November all the way into April.

Our little off-grid cabin has no running water and electricity comes from four big car batteries that get charged by the sun via solar panel. It is an environment in which resourcefulness and flexibility is rewarded and rigidity and laziness are not. Instead of a shower and a toilet, we have a wood-stove-heated sauna and an outhouse. Gardening means keeping all your seedlings and plants inside and then putting them in a greenhouse all the way into June just to avoid the frost that accumulates late into the spring and summer. Staying in touch with people involves driving up the Alaska Highway far enough to reach a point where you can find cellular service. This resourcefulness creates a unique and wonderful community of people known as “Yukoners,”  who know it takes a kind heart and open arms to make it through the harshest of winters.

Although, in this little corner of the world, there is usually a time of year when things aren’t so isolated. In a normal non-COVID summer, the highway that runs to our community is packed. The Alaska Highway is usually home to thousands of adventurers making their way to Alaska and the only way to get there is via the Yukon. Finished in 1945 by the US Army, the Alaska Highway was built as a way to connect the “lower 48” states of the United States all the way up to Alaska as a way to transport military personnel and equipment. Today, it is not unheard of to see motorcycle and RV convoys making their way all the way from the southern tip of South America way up to as far north as they can go.

The Arctic and the North bring thoughts of cold and constant darkness, but although there are a few weeks during the winter when the sun’s presence is completely absent, the complete opposite is true in the summer. You don’t have to wait until June 21 to have endless hours of sunlight. Even as I write this at the beginning of May, the sun is up at around 6 a.m. and the light in the horizon can be seen well into the night, disappearing these days at around 11 p.m. Come summer solstice, it will never get completely dark, even in the wee hours of the morning.

Watching the sun do a complete circle around you in the height of summer is a sight that still blows my mind. It’s a magical experience that makes the biting mosquitoes and lack of instant hot running water seem not so bad. While the darkness of the winter allows us to curl up beside the wood stove, catch up on some reading and enjoy the majesty of the aurora borealis, in the summer, the opposite happens. The constant light is an invitation to work hard and play hard. An outdoor enthusiast’s dream, there are endless mountains to climb, rivers and lakes to paddle, and native and migratory wildlife to follow.

As an outdoor enthusiast and someone who works as a wilderness guide, this is my little slice of paradise. It was a job offer from a company that leads multi-week expeditions in remote places all over the world that brought me to the Yukon for the first time in 2016. The National Outdoor Leadership School (NOLS) has a reputation for offering the ultimate outdoor educational experience and I was thrilled to accept the position of equipment coordinator for their wilderness trips.

During two summers of driving big vans with 13 canoes in tow and hopping on float planes to do mid-expedition gear drops, I got to know the vastness and majesty of the Yukon. The NOLS job also introduced me to the community of Whitehorse, the people who have chosen to call it home, and the territory’s summer music festivals. In fact, it was at a music festival in Dawson City, home of the Klondike Gold Rush, where I met my partner Luc, the engineering brain behind our off-grid cabin.

Our cabin is located in a special corner of the territory on the shores of Kluane Lake. Adjacent to a national park with the same name, Kluane is home to some of North America’s highest mountain peaks and the world’s largest non-polar icefield. Next to the lake and a short bike ride away from our doorstep, is an airstrip serviced by a company called Icefield Discovery that leads sightseeing tours that follow the Kaskuwalsh Glacier all the way until you reach Mount Logan, Canada’s tallest mountain.

In a summer full of tourists, we can hear their plane taking off up to six times per day. These days, the buzzing of the airplane overhead isn’t seen or heard as much, but luckily they don’t only rely on tourism but also assist mountaineers and scientists to reach destinations on the glaciers only accessible via ski-plane. I will be employed there this summer, helping out at their base camp located in the shadow of Mount Logan.

To help keep the territory, with its few medical resources and supplies, safe during the pandemic, a mandatory 14-day quarantine is in place to all those who enter the Yukon. It has meant low case numbers and almost zero tourism. But if I have piqued the interest of any readers and sparked a desire to visit this far off corner of Canada, once COVID-19 has been controlled, flights are available via Vancouver and Edmonton to Whitehorse with Air Canada and Air North.  From there, adventure awaits.