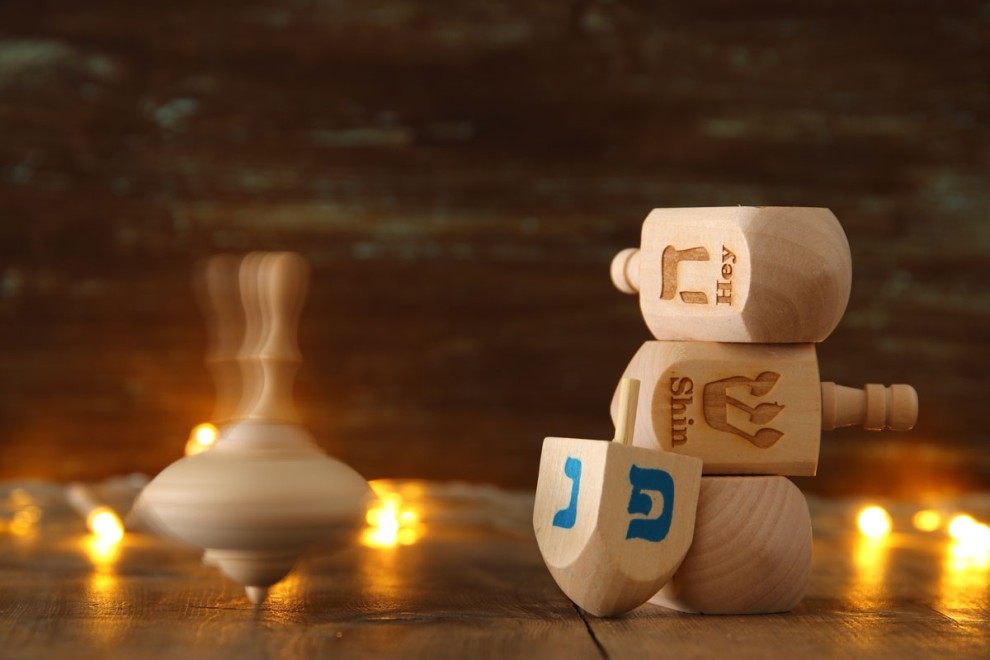 Each Jewish holiday has its own unique mitzvos and minhagim. (commandments and customs). During Pesach we eat matzah and search for the afikoman; During Sukkos we sit in the sukkah and we dance on Simchas Torah; over Chanukah, we light the candles and eat foods made with oil.  While every mitzvah has its origin in the Hebrew Bible, minhagim generally emerge from particular places and societies. This explains how Jews from different geographical locations will have differing minhagim. At times minhagim are born out of Jewish creativity, and at other times they are simply outgrowths of the host culture they are currently living within, all of which can lead one to wonder about the origin of the custom of playing with a dreidel on Chanukah?
There are many ideas taught around the dreidel, that would lead one to conclude that they are a Jewish invention. For example, the modern dreidel has the Hebrew letters nun, gimel, heyh, and shin in the diaspora, while having nun, gimel, heyh and peyh in the land of Israel. The letters are explained to be an acronym for the phrase, nes gadol haya sham — a great miracle happened there, or nes gadol haya po —a great miracle happened here, referring to the miracles of Chanukah.   It has also been suggested that the usage of the dreidel game that took place at the time of the Maccabean revolution was to remove suspicion from the young children of committing the Greek sin of learning and studying Torah.  This was done during learning sessions by taking out the dreidels when Greek soldiers approached, giving off the impression that they were doing nothing but gambling. When the soldiers left, the students would continue studying the Torah. Though, it would seem that the dreidel must have been a Jewish creation, this does not seem to be a historical fact.
In actuality, the origin of the dreidel is a game called teetotum, which is found among numerous ancient peoples, in various languages, across millennia. In fact, some weren’t even four-sided. The earliest records of this gambling game date back to circa 100 BCE. Ancient Greek teetotums were in fact four-sided, but many surviving examples of them are six-sided, like our modern dice.
If this is the dreidel’s true origins, it seems quite ironic that the holiday of Chanukah, which celebrates the affirmation of a uniquely Jewish national identity — specifically overcoming pressures of assimilation of a host nation —would be commemorated with one of the enemy’s own games. On top of this, some have the custom to still use the dreidel to gamble, which is definitely not a Jewish ideal.  How can we make sense of this?
As a point of order, there are some halachic authorities who say it’s only permitted to play with the dreidel without the gambling components,  for a short amount of time,  and there are even those who avoid playing with the dreidel entirely.  Other authorities speak very strongly of the tradition of playing dreidel on Chanukah, calling it an early custom.
It is clearly a widely-enjoyed custom, but how can these varying points be reconciled?
It seems that it is precisely the assimilation of a secular game into the Jewish culture that shows our true victory over the Greeks. We do not play with a teetotum or modern spinning top— we play with a dreidel. The term chinuch, meaning education, is the root of the word Chanukah, and the dreidel is used to teach many Jewish lessons. Every aspect of the dreidel is an opportunity for another Jewish lesson. For example, it is explained that the dreidel is spun from above to hint to the fact that the miracles of Chanukah came from Hashem.
In a reality where external pressures aren’t going away, we commemorate overcoming assimilation by incorporating an external practice, but implanting spiritual significance to every aspect of it.
Rabbi Nachum Aaron Kutnowski is currently a Judaic Studies teacher at the Hamilton Hebrew Academy, as well as at the Hamilton Kollel.