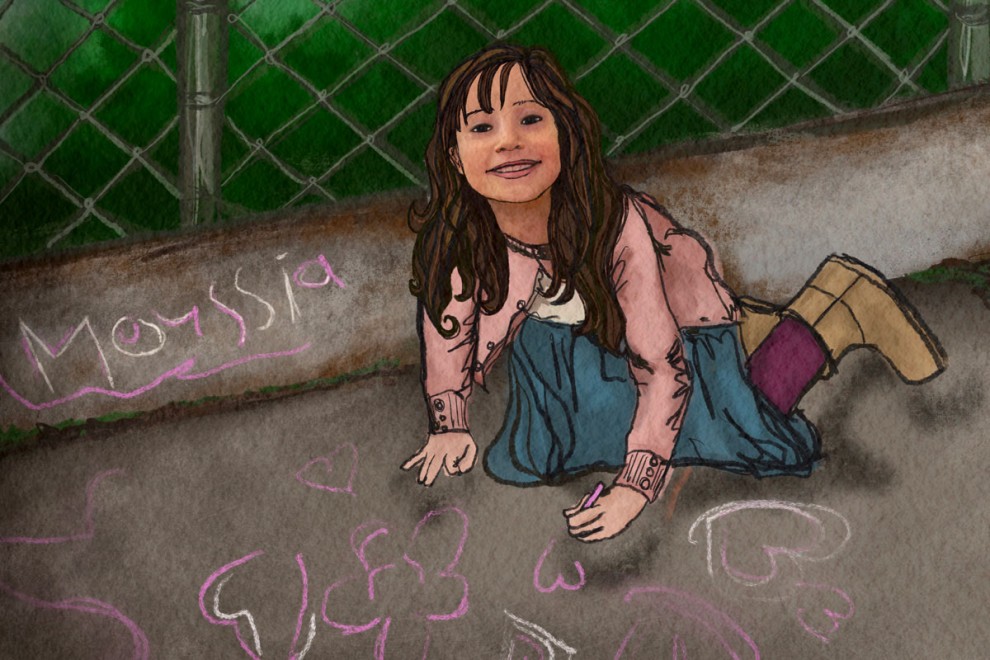 Like so many others in the Jewish community, Rebecca Shapiro was deeply affected by the tragic drowning in 2015 of six-year-old Moussia Zaltzman, daughter of Chabad emissaries to the Niagara region, Rabbi Zalman and Perla Zaltzman. So, to honour what would have been Moussia’s Bat Mitzvah year, Shapiro spent the good part of the last year writing and illustrating a children’s book about Moussia, her family’s grieving process, and the ways the Zaltzman family is keeping their daughter’s memory alive.  The fruit of her labour is It’s Not Over When We Say Goodbye, a book that one prominent trauma specialist has called a “game changer” that “should be a part of every family and school library.”

This is not the first book Shapiro has written — she’s been commissioned in the past as a ghost writer and curricula writer   —  but it’s the first she feels is truly her own creation. At the same time, the finished product was very much a team effort. Shapiro worked closely with Perla Zaltzman, whose feedback she sought early on in her writing process, after realizing that the story would have a greater impact if it was told in Moussia’s voice.

“We kind of took the journey together because the way that Perla wanted to grieve was not to forget Moussia but to bring Moussia to life,” Shapiro says. “Her biggest fear is that people will forget her daughter and ... she wants people to remember her daughter with warmth and love. She had the most beautiful personality ... She was a very nurturing and motherly kind of little girl.”

Shapiro also consulted widely with therapists and trauma specialists she knew from Project Proactive, an advocacy organization she co-founded a number of years ago that develops mental health resources in the Jewish community. Their advice would turn out to be invaluable.

“When I first wrote it, I glossed over a lot of the details around her accident,” says Shapiro, who was concerned about traumatizing young readers. But her colleague urged her to take a different approach. “’She said ...  you have to give the kids enough details that leaves no room for their imagination, because imagination is so much scarier than the truth.’”

Shapiro says that avoiding difficult conversations around illness and death is widespread in her generation. “I remember watching people come to the shiva house and they were bawling their eyes out and Perla was comforting them,” she says, who acknowledged her own feelings of awkwardness and uncertainty about what to say. But in private conversations with Zaltzman in the weeks and months following Moussia’s death, Shapiro learned that would have been most helpful was for people to be attuned to what her needs were.

“I think that’s what a lot of us are missing,” says Shapiro. ... “I don’t know that I was always so attuned to what other people needed until Perla got me reading books, and it really did help me ... learn more about how to be attuned to other people’s needs when they are in need  ... and not to overstep and push my own agenda.”

Recognizing that many people experience similar discomfort in the face of another person’s tragedy, Shapiro included in her book a parent’s guide and a grief guide for the community at large. The parent’s guide, written by trauma specialist Esther Goldstein, gives parents practical tools that will enable them to have open conversations with their children about death. The community guide, written by Shapiro, offers insight into Jewish mourning rituals and meaningful ways to comfort mourners.

If Shapiro’s deep dive into the Zaltzman family tragedy has taught her anything, it’s that the capacity to feel great pain and experience great joy are inextricably linked. She writes in her author’s note of the profound impression Zaltzman family simchas have had on her over the last few years.

“I don’t think I’ve ever experienced joy to that magnitude as I do when I go to their family simchas,” Shapiro says.  “Moussia’s a part of every one of these events. There’s a certain amount of warmth of having her presence there ...  The joy is palpable because they’ve seen so much sadness and because they’ve allowed themselves to feel sad, I feel like that just gives them that added element of being able to feel joy.”

In the book’s closing section, Perla Zaltzman writes how she received an advanced copy of It’s Not Over When We Say Goodbye two days before Moussia’s sixth yahrzeit. That night, as she read the book to her two youngest children, both of whom never knew Moussia, she immediately saw its effect. “Their connection to Moussia was palpable, more than ever before. For that alone, this book is the greatest gift Rebecca could have given us in honour of Moussia’s Bat Mitzvah this year,” she wrote.

It’s more than likely that Shapiro’s book, enhanced by beautiful digital illustrations, some of which are based on actual photographs, will be seen in the same light by countless others, including the Jewish and other faith-based organizations that have ordered copies. Zaltzman shared with Shapiro that her daughter Hanna’s favourite picture is the one that shows Moussia lying peacefully in her hospital bed, her brothers by her side, and members of the community praying in the background.

This reader was drawn to an illustration based on an actual event, its backstory infused with what feels like mystical significance. It shows Moussia, a week before the accident, drawing her name on the pavement of the Hamilton Hebrew Academy playground, a moment her teacher Clare Gajdo, with uncanny foresight, captured by taking a picture of Moussia’s handwriting with her cell phone. Six years later, Shapiro would trace those precious letters, making it possible for Moussia’s own imprint to grace the book’s cover, just as it graces the playground that now bears her name, and the book that closes with these words:

Each day that you read this story,
Or talk about me for a while,
Is another day my memory is celebrated in this world,
And it really makes me smile.