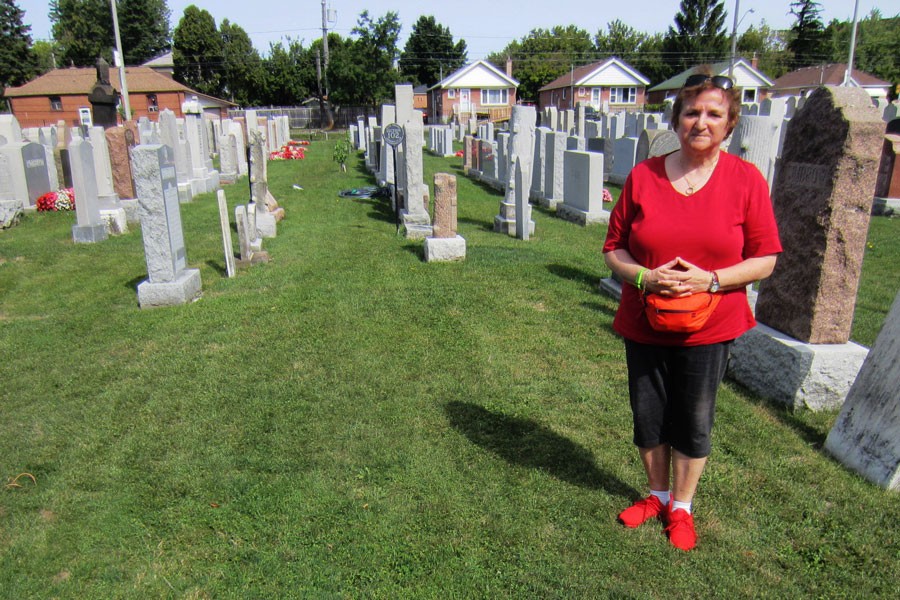 All her life, Hamilton native Debbie Sacrob heard stories of the two babies in her family who had died. According to family folklore, after her father Lorne’s birth in 1929, her grandmother, Rose had two more pregnancies. The first likely resulted in a miscarriage while the second, in 1941, ended in the stillbirth of a baby boy.

It was common in the 1930s and 1940s, for a stillborn baby to be buried without ceremony in an unmarked grave. Although there are differing opinions, Jewish law dictates that if a baby does not survive for 30 days, it is as if the baby never existed and one does not mourn the loss.

Dan Levy, president and general manager of the United Hebrew Memorial Chapel of Hamilton notes a formal funeral provides a certain comfort. “I don’t ever say to a family that they cannot do a service if the baby doesn’t survive 30 days. I think it is important for healing purposes,” he says.

Debbie knew that the stillborn baby was buried somewhere in the Jewish cemetery on Toronto’s Dawes Road. There is no marker on the grave and no one knows exactly where the baby was interred. However, that story never sat well with her. Her family never had any evidence that the baby existed at all. She made it one of her life’s missions to find out whatever she could about this child.

Rose and her husband, William Sacrob, moved from Toronto in 1948 when they opened up a Hamilton branch of their family business, Service Sanitary Linen Supply Company. The Sacrobs made Westdale and Dundas their home for the next 16 years. Through their membership at Temple Anshe Sholom, Lorne met Selma Caller and the couple married in 1951.

Their daughter, Debbie, and son, Steven, soon followed. In 1964, Lorne, by then a manager for Coles Bookstores, accepted a transfer to a larger outlet in Toronto. The family has lived there ever since.

After Rose died in 1983, Lorne with Debbie at his side, decided to search for the grave of his lost sibling. “My father had often expressed interest in finding out where this baby was buried, but I don’t believe he did anything until then. Perhaps the loss of his mother spurred him on,” said Debbie.

During the trip out to Dawes Road, Lorne and Debbie were shown an unmarked plot of land where babies and stillborns were buried. The groundskeeper noted that families are free to erect a marker commemorating their relative, but there was no way to know exactly where the departed was buried. The cemetery staff was otherwise unhelpful and the pair left feeling unsatisfied with their visit. Lorne never resumed his search before passing away in 1991.

In 2003, Debbie decided to once again take up the search. She wanted to obtain tangible evidence of the existence of the baby and hopefully find out exactly where he was buried.

An application to the Office of the Registrar General of Ontario, gave her the confirmation she was looking for. Debbie received a Certificate of Stillbirth for Baby Boy Sacrob. She recalls, “I was overcome by the oddest feeling. I just stared at it. Suddenly I had evidence to this sorrowful chapter of my family history. This affected me more profoundly than I had expected.”

The certificate indicated that the baby was born at Toronto General Hospital on June 4, 1941. Interment at Dawes Road cemetery was handled by Benjamin’s Park Memorial Chapel and a police permit (required in those days) for burial had been issued.

This new information increased Debbie’s desire to learn more. She contacted Benjamin’s who told her that their records for 1941 had been lost in a flood. Debbie found out that neither the hospital nor the Toronto Police held records going that far back. Again, she was at a dead end and put her search on hold.

As years passed, Debbie made subsequent visits to Dawes Road. While the current staff has been considerably more sympathetic, they have not been able to offer any more information than she received back in 1983.

Through the Jewish Genealogical Society of Toronto, Debbie discovered that Benjamin’s had submitted seven record books detailing their burials from 1930 to 1980, to the National Archives of Canada. Debbie wondered if these would include copies of the records that she was told were lost. Several attempts to contact Benjamin’s to clarify this have gone unanswered.

Undeterred, Debbie requested from Library and Archives Canada any records for babies named Sacrob in Benjamin’s record books. In September 2020, she received a copy of a 1941 Benjamin’s file card for the burial of Baby Boy Sacrob. While information on the card was the same as the certificate, it corroborated the existence and fate of the baby. Again, no specific grave location was indicated.

While the general area within Dawes Road cemetery where Baby Boy Sacrob is buried is known, the actual location of the grave remains a mystery. An equally exhaustive search for Rose’s second baby has yielded no results. Believing that she has discovered all she can, Debbie said,

“I feel I have come full circle now. I wish my father had been able to see the certificate. That is what he was looking for. It might have given him closure.”