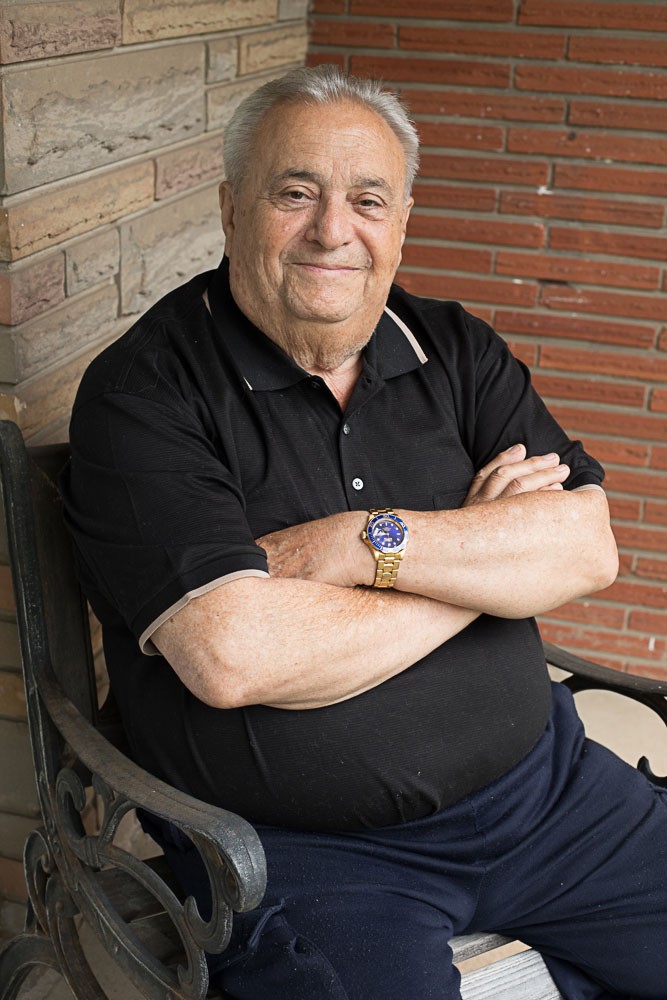 As Frank Junger tried to focus on his school work on that unforgettable day in March, 1944, he was aware of the pounding of footsteps outside the school window. German soldiers were marching into Valea Lui Mihai, Romania, and their approach marked the beginning of the end of his childhood.  Frank was just 13 years old.  He had become a Bar Mitzvah, yet he was far from being a man. From now on, this skinny boy from a middle-class family would have to rely on himself to survive.

Frank and his parents lived a comfortable life in the town located about six kilometers from the Hungarian border.  They were part of a community of about 1,500 Jews in the town of 20,000 people, and for the most part, they lived a peaceful co-existence with their non-Jewish neighbours.  Frank’s family was well off.  He recalls that they had over 400 sheep and 40 oxen.

At the end of March, the Jews of his town were expelled to a ghetto in Hungary.  In May, on the pretense that they were being sent away to become farm labourers, the Jews were loaded into train cattle cars. More than 100 men, women and children were squeezed into each small car. Tiny slots allowed in a bit of air, but the heat was oppressive and the conditions were unsanitary. A barrel of drinking water was provided, but it was consumed quickly and the people were desperate for something to drink.  A wooden tub was available as a latrine, but there was no privacy and the situation was degrading.

After the arduous journey, the train arrived at Auschwitz-Birkenau. The people were pushed out of the cars and forced to line up, men separated from women.  The women were led away and Frank never saw his mother again.  Frank recalls the men being forced to discard their clothes, then being shaved from head to toe, and eventually being given striped uniforms.  Everyone looked the same.

“We hadn’t eaten or had anything to drink in 48 hours.  They brought us some food in metal garbage cans, but it wasn’t really food.  It was slop. We had to cup our hands to drink it.”

Frank soon was separated from his father, never to see him again.

Frank attributes his ability to cope at Auschwitz-Birkenau to a number of factors, one being that he spoke multiple languages:  Yiddish, Romanian, Hungarian, German and a bit of English.  He was able to understand the guards and he was able to discern the advice of some adult prisoners.  One day, a male prisoner asked his age.  When Frank said he was 13, the man advised him to tell people he was 16 because he would be more valuable to the SS if they perceived him to be older.

Frank was one of the few children from his town to survive the concentration camps.  During a selection process initiated by Dr. Joseph Mengele, the notorious “Angel of Death,” Frank was ordered into a line of boys that Frank sensed were to be exterminated.  He managed to sneak into the other line, the line of boys selected to live.

Frank seized every opportunity he could to make himself appear healthy so he would seem valuable as a worker. Frank saved a sliver of beet peel from the meager rations so he could smear the red vegetable on his cheeks.  He is sure that this trick saved him from being selected for extermination.

In January of 1945, the camp was evacuated and the prisoners were forced to march through the countryside in the bitter cold.  Many of them froze to death. He says he kept alive in the frigid weather because of the compassion of an old school friend who had passed himself off as a Gentile.  The friend gave him a pair of long underwear which saved his life.

Frank ended up in other concentration camps, including Gunskirchen, Melk and Mauthausen.  When the American forces liberated Mauthausen in 1945, Frank was admitted to a hospital with a severe case of typhus. Once he recovered, he returned to his town with the hope of moving into his family home, but it was occupied by Romanian officials. For a short time, he lived with two uncles in Budapest, and then he moved to Canada to begin a new life.

He moved to Hamilton where he worked for an automotive company and then went into the bakery business.  Later, he met George Bick, and in 1951, he became a part owner of and a distributor for Bick’s Pickles. Frank was an independent distributor for Bick’s in the Niagara Peninsula region until his retirement in 1995.

For years he didn’t talk about his experiences, but after his retirement, he became a regular speaker on Holocaust education, addressing thousands of students.

He married Eliane Ligeti in April, 1962. Frank and Eliane have two children, Steven and Kathryn, and four grandchildren.