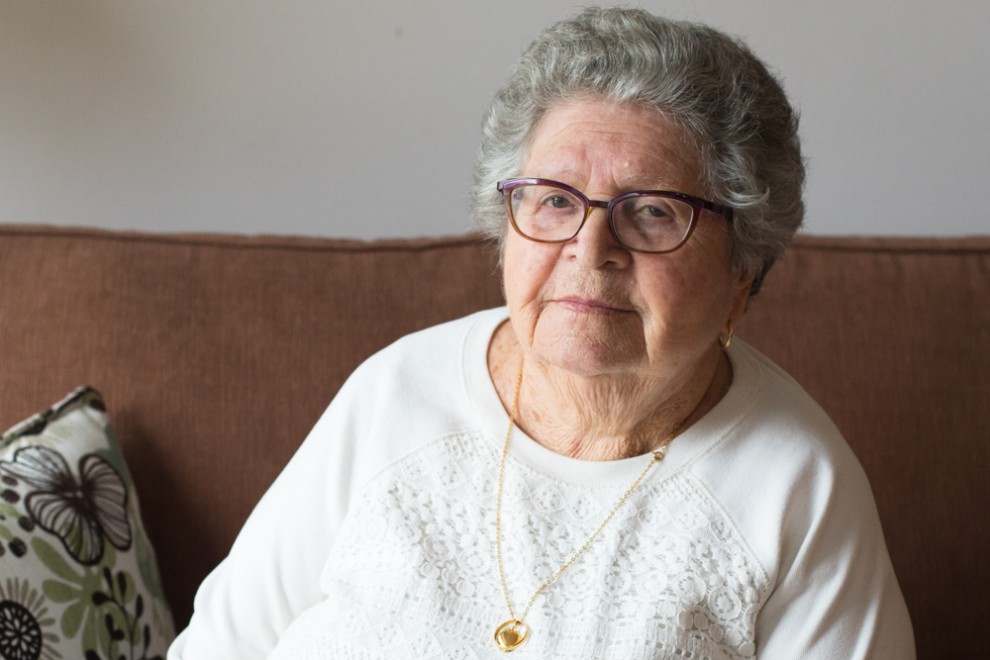 Luck and circumstance contributed to Elizabeth Albano's survival during the Holocaust.  However, being a self-described “tough cookie” helped her endure during that dark period.

Elizabeth Albano, nee Stern, was born in 1928 in Kisvarda, a small town in Hungary.  She grew up in the nearby town of Nagyeced with her parents and older sister, Vera.  The family was poor, living in a town where anti-Semitism was the norm. When the Germans occupied Hungary in 1944, Jews were stripped of their properties, denied access to higher education and ordered to wear armbands with yellow stars indicating they were Jews.  When Elizabeth’s family and the other Jews in the community were forced out of town to a nearby ghetto, Elizabeth’s neighbours ran after them, shouting:  “Good riddance, you dirty Jews!”

In the ghetto, people lived in squalid conditions, a few families packed together in one room.  They were wary of the Hungarian police who made frequent raids. One day a policeman, who was greatly feared because of his cruelty, stomped into the room where Elizabeth was now living with her parents, her sister and a couple of other families. Elizabeth was alone at the time.  She was frightened, but when he  scowled at her, demanding to know why the room was untidy, Elizabeth angrily retorted: “How can we keep this place tidy?  There are so many of us in the room. We do the best that we can.” The policeman was startled at her rebuke and warned that they must improve in the future.

After about a month in the ghetto, Elizabeth’s family was among the many Jews forced into cattle cars of a train bound for Auschwitz-Birkenau.  The hundreds of people in each car had little room to breathe and virtually no water to drink.  A makeshift latrine with no privacy contributed to the distress.

Elizabeth was 15 years old when she arrived at Auschwitz-Birkenau.  That was the last time she saw her mother and  father who would perish in the Holocaust.

Soon after their arrival at the camp, men and women were separated from one another.  Elizabeth and other girls were stripped naked, shaved from head to toe and ordered to step into a solution of disinfectant before showering. They were terrified and humiliated.  After donning clothing picked from a discarded pile of garments, they went to a holding area where they had to sleep on the floor. Elizabeth fell into a fitful sleep, only to be woken by the sound of the girls screaming at the sight of shooting flames nearby.  The girls assumed the camp was on fire.  Later, Elizabeth would discover that the flames were shooting from the chimney of the crematorium which was used to burn bodies.

Having survived the selection process in Auschwitz-Birkenau, she was sent to Plaszow concentration camp in Poland where she worked in a quarry splitting rocks with a pick ax. She remembers the crushing weight of the rocks she was forced to carry. Each day was a nightmare and she lived in constant fear and misery.  One saving grace was that her sister Vera was by her side, but when the sisters were sent back to Auschwitz-Birkenau, they were separated.

From Auschwitz-Birkenau, Elizabeth was sent to Bergen-Belsen concentration camp.  Starving and emaciated, the prisoners lived day to day with little and sometimes no food.  She recalls the barracks being so crowded that the skeletal figures would have to sleep sitting on the floor, propped up against one another.  At the time of the camp’s liberation, she weighed about 48 pounds, was ravaged by lice and was deathly ill with tuberculosis.

After an arduous and slow recovery, she ended up in Sweden where she met the man she would marry, an Italian named Gino Alvano.  She and Gino wanted to leave Sweden and move to the United States because Elizabeth had discovered her sister was living in Queens, New York.  Elizabeth hadn’t seen Vera since they were separated at Auschwitz-Birkenau.  When it turned out that moving to the United States wasn’t an option because they couldn’t get a sponsor, she and Gino decided that Canada would be a viable second choice. After Elizabeth and her husband moved to Ontario, the sisters were reunited.  They had not seen one another for seven years.

The Alvanos initially worked on a farm near Niagara Falls, then moved to Hamilton where Gino became a chef at the Hamilton General Hospital. Elizabeth would eventually work in food services at the hospital as well.

Gino died in 2012.  Elizabeth and Gino had two children, a daughter and a son.  Their son is no longer living.

Elizabeth says: “This is just one of the many stories… We always say, never again.  I hope that (wish for the future) becomes true.”