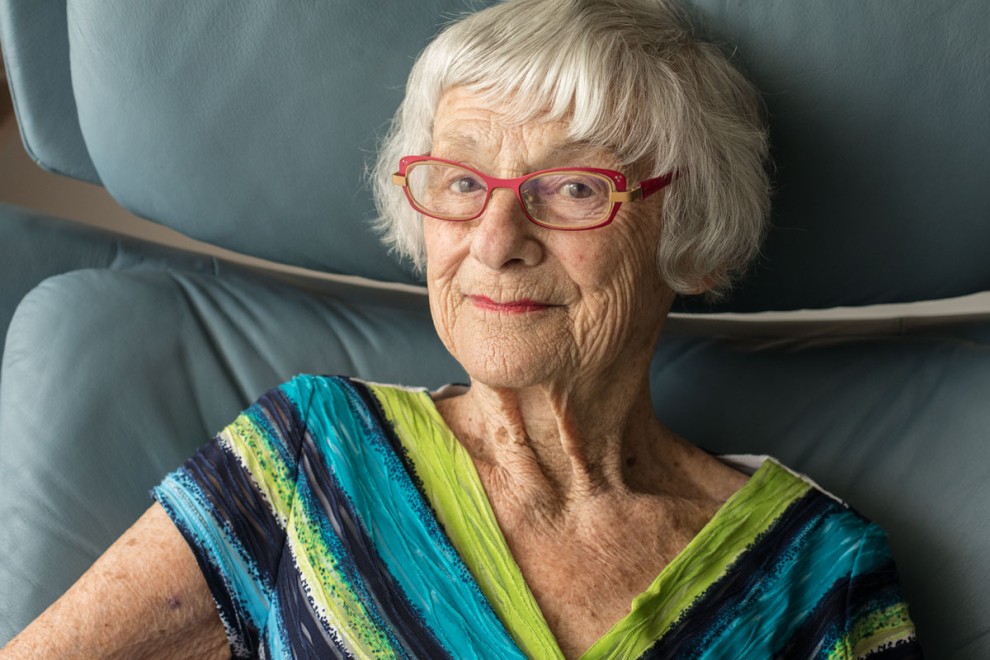 As a young girl in Czechoslovakia, Anita Fuchs lived a wonderful, privileged life.  Her house was grand, complete with a cook and a kinderfraulein (governess).  She has fond memories of life with her parents, including family skiing trips to Switzerland, vacations to Yugoslavia and Austria, and Sunday breakfasts in her parents’ bedroom. And above all, she remembers her parents’ love and understanding.  She was secure in the knowledge that her home was her refuge.

But her world was shattered by the reality of the time.

In 1939, as the Nazis marched into Prague, Anita’s parents realized that the threat to Jews was imminent. The safety of their children, 12-year-old Anita and her eight-year-old brother Jiri, was all that mattered.  They made the ultimate sacrifice: They sent the children away.

Anita Spenser, nee Fuchs, recalls the shock of being thrust into a sphere of uncertainty as she and her brother joined the Kindertransport, a movement providing thousands of Jewish children in Europe a chance at a future with families in England. Anita and Jiri were among the 669 Czechoslovakian children directly saved by Nicholas Winton, a British stockbroker who was later acknowledged as a reluctant hero. His contribution to Kindertransport was not known until 1988, when his wife discovered a scrapbook detailing his work. He was ultimately honoured with a knighthood from Queen Elizabeth and a Czech prize for outstanding service to humanity. To this day, Anita keeps a picture of Nicholas Winton on her refrigerator.

Anita begged her parents not to send her away, but they saw no alternative.  They escorted Anita and Jiri to the train filled with children bound for safety in England. When Anita and Jiri transferred to a ship for the last leg of the trip, they were separated from one another.  Jiri found it difficult to be away from his sister who had assumed the role of surrogate parent. Each evening, he would insist that Anita come by to say good night.  He needed her assurance that everything would be all right and Anita did her best to console him, even though she was in need of consoling as well.

Anita and Jiri lived in Brighton, England, near one another but in separate homes.  Anita describes her living situation as “pretty horrible.”  The couple who took her in had a bad marriage and there was tension in the home.  The most troubling aspect of those years was that Anita felt threatened by the husband.  She was able to withstand his advances, but his presence was unsettling.

Anita did well in school until she realized that there would be no financial support for her to attend university.  Her marks plummeted, as did her optimism for the future.  The headmistress at her school, a Miss Warmington, realized that the bright refugee student had enormous potential and she was able to find a scholarship for her and one for Jiri as well. Once again, Anita found the determination to work hard at her studies.

While at university, Anita was informed that her mother and father were killed in Auschwitz.  She was devastated, but she swore that she would continue her studies in memory of her parents.

Jiri earned a PhD and remained in England where he married and had four children.  Anita studied social work at the University of Birmingham and became a psychiatric social worker.  While at university, she met another Jewish refugee, a man named Ian Spenser who had also escaped Prague on a Kindertransport train. They married and moved to Canada, and eventually to Hamilton, where Ian became a chemistry professor and researcher at McMaster University.  Anita became an associate professor at McMaster and worked for many years as a social worker in the department of psychiatry at St. Joseph’s Hospital. They have two children, a son and a daughter.

Her recollection of her experiences as a youth bring tears to her eyes.  But she remains strong. “You have to live life,” Anita says. “You have to go on.”