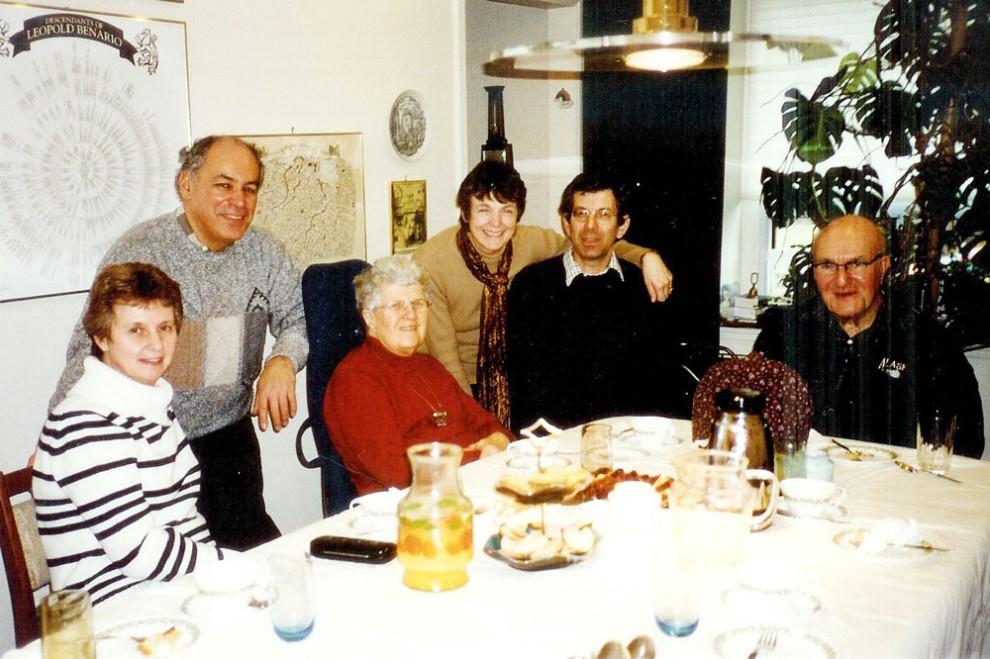 Some members of the Hamilton Jewish community will have known Ruth Goldberg. She died in 2010 but her memory lives on. Her maiden name, Benario, can be translated as “son of a lion.” Ruth was a lioness when it came to searching her family ancestry and connecting living family members.

I know, because she did this for me and it changed my connections to my family and its history.
It starts with the Benario family tree drawn up in 1921 and passed down to Ruth. She used it to search for connections, writing letters around the world to find connections with names on the tree.
An early connection was triggered by the tree hanging in Ruth’s home.
Her friend Lore Jacobs saw this picture and said “Gangolf Herman, a friend of my husband’s in Mississauga has a copy of that hanging on his wall.” Gangolf’s wife, Hilde (nee Stern) was the granddaughter of Mathilde Benario.  With this, Ruth made a new Benario connection. One that lived just a few miles away from her.
We will come back to that connection later in the story.
My father, Andrew Carlebach, born in 1919, was also noted on this tree as a grandchild of Mathilde Benario. Along with his parents, Alfred and Elisabeth Carlebach, and sister Susanna, Andrew had fled Germany to England in the 1930s. Wartime saw my father in the British Army and required to anglicize his name to Carson in case of capture. Alfred and Elisabeth separated, and my father lost contact with other Carlebachs.
Fast forward to 1995 when sister Susanna met Emil Carlebach, a survivor of Dachau and Buchenwald, at a 50th anniversary commemoration of the liberation of Buchenwald. Naturally, she asked if they were related. No, came the answer, but you might contact Professor Carlebach at the University of Sussex.
A reply came from Professor Carlebach’s wife. “We are not related, but I kept a letter written to us five years ago from Ruth Goldberg in Hamilton, looking for a Peter Carlebach, who appears on her family tree.”
Susanna passed the letter to my father Andrew (his middle name, which he used instead of his given name Peter), who suggested I contact Ruth as she lived close to me. A phone call to Ruth was all it took.
The Benario lioness had struck. Another family member found. Another connection made.
After I connected with Ruth Goldberg, another phone call was made. Gangolf and Hilde’s son Gavin Herman, my soon to be known second cousin, also lived in Mississauga, his sister Ruth in Vancouver.
Gavin and I connected, and we have become great friends. He introduced me to Helena, his Stern/Benario cousin in England, and together we have all been on many family ski-trips ever since.
Another connection made.
More connections came as Gavin’s children celebrated their Bar and Bat Mitzvahs. Family were invited from everywhere and Benario cousins met, or reunited for the first time since Germany in the 1930s.
Two footnotes:
Andrew Carson and Gangolf Herman, on swapping stories, learned they had both been interned by the British as enemy aliens and transported to Australia on the notorious ship Dunera in 1940. Connection!
Cousins Andrew Carson and Oscar Stern, also story swapping, learned that post-war they had both worked, unknown to each other, in the same office of Lyons Tea in England. Connection!
In 2022, at the time of writing this, Yaacov Goldberg, Ruth’s husband is alive and well in Hamilton. Susanna is the only surviving cousin of her generation. The cousins’ children though are still very much connected and thank Ruth Goldberg, lioness of the Benario clan, for her work in bringing them together.
David Carson lives in Dundas. He continues to search for family connections.  His father, Andrew Carson, was a member of the X-Troop, a secret  Jewish commando unit that fought for the British against the Nazis on the front lines of all the major battles of the Second World War.  Dave Carson will discuss his father’s career as part of the JTalk Zoom series on Thurday, Feb. 24 at 1 p.m.