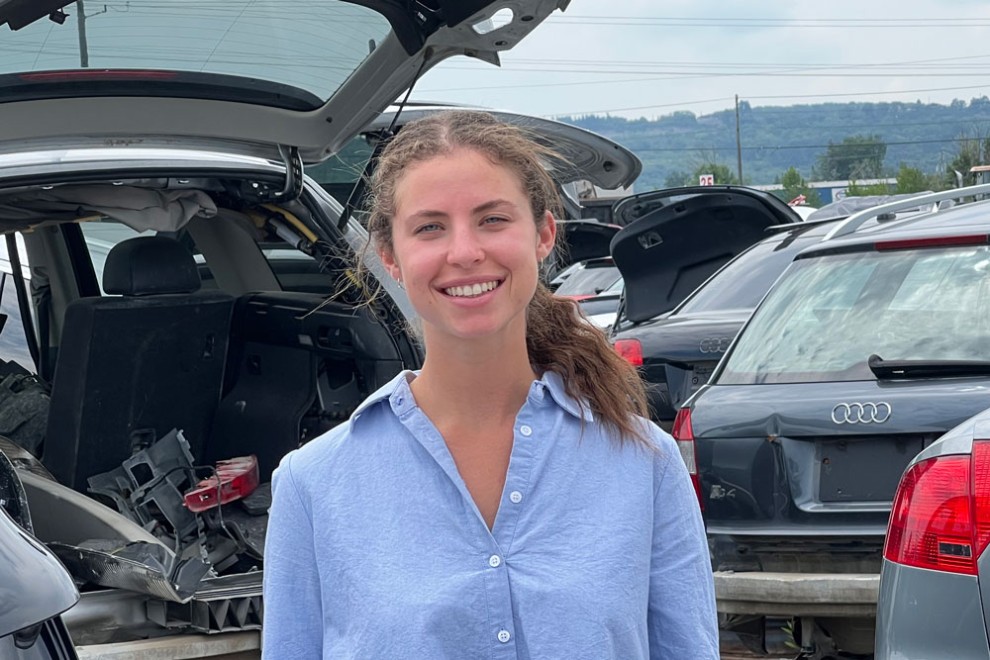 “Be the change you wish to see in the world.” Most of us have heard this quote by Mahatma Gandhi and perhaps even been inspired by it. It’s a beautiful sentiment and one that reminds us how anyone, really, has the power to make a positive impact on the lives of others.

But in these times of extreme political polarization, economic uncertainty, war, famine, and a warming climate, it can be difficult to believe that one person really can make a difference.

And yet, it has always been clear to the Hamilton Jewish News that there are, in fact, many individuals in our community who are making a difference in their respective fields. That’s why its affiliated podcast, The Shpiel on Hamilton, recently launched “Impact Makers,” a series of episodes that highlight the work they are doing and seeks to understand what motivates them to devote so much of their time and energy to improving the lives of others.

Below are excerpts from the series first three episodes.

Laura Wolfson is the community professional in charge of Hamilton Jewish Federation’s J-Welcome Home initiative, a role she first took on as a volunteer several years ago after retiring from her position as director of education and cantorial soloist at Temple Anshe Sholom. As the point person for those interested in moving to Hamilton, Wolfson picks up newcomers from the airport, finds them places to live, fills up their refrigerators with groceries on the eve of their arrival,  arranges for Shabbat dinner invitations, and introduces people to other families or older couples with whom they have something in common. She’s also been instrumental in developing the J-Welcome Home website and securing complementary synagogue memberships, Jewish day school and Camp Kadimah spots for newcomers and organizing official welcome events.

Why she does it
“The idea of “kol yisrael arevim zeh le’zeh” — that we are all responsible for one another as Jews is something that really informs who I am. We have a small Jewish community that is thriving because there are so many opportunities for people to be involved.”

Roots of her activism
“There are moments I can recall growing up when it became crystal clear to me that Jewish community is all about taking care of each other. My mom’s oldest friend had a son my age who died tragically when we were 18 years old and I remember all the moms surrounded her in this embrace of mourning and comfort. This was the first thing I remember of how we take care of each other because this is what you do.”

Role models
During the Bosnian war, my parents sponsored a young couple with two very young children who had left everything. They had nothing. My parents helped them find work and a place to live, furniture, getting settled for the children, and they, to this day, remain members of our extended family. When we buried my mom last January, the husband of the family was one of the pallbearers who said that my mom was his Canadian mom. That was the kind of role modeling that they did. They didn’t say you should take care of people who need help. They just did it and I learned from that.
I also recall learning about Judy Feld Carr, who essentially rescued the entire Jewish community in Syria in secret over 25 years. And I remember thinking, she actually believed she could make a difference and that was the thing that made it all happen. I wanted to be like her.”

What she does
Amanda Katz, 27, is the executive director of Homeless Cars, a charitable foundation founded by her family. Homeless Cars helps people turn their old car into a meaningful donation that it distributes to charities that work to eliminate homelessness in Ontario.

Why she does it
Katz lives in Toronto, but Hamilton has always been close to her heart. Seven years ago, when her father introduced her to 541 Eatery Exchange, a non-profit restaurant where people have the opportunity to help pay for someone else’s meal, Katz was deeply affected.  “I had such a desire to do some of that work myself. And I began starting volunteer programs for them after spending a couple of years volunteering on my own. So it’s been a long journey for me ... I just love to put my energy towards organizations that are helping people in need within our own community and our own backyard.”

Role models
Katz said that community work has been something she’s always been interested in. “My mom would drag my sister and I out of bed at 6 a.m. on Wednesday mornings and take us to Out of the Cold. Her day-to-day willingness to put others first is something that was ingrained in me from a very young age. My great grandfather came from very humble beginnings but was able to build up a business that my grandfather, uncle and father eventually took over. Over the years, they managed to build something to the place that they could give back to the community. There was always a desire to support organizations at large. But Hamilton is a place that we care about deeply.”

Serendipity
After several years working in the advertising industry in Toronto, Katz realized she wanted to make the focus of her work supporting small organizations that are making an impact within the community. “I looked at a number of charities and am just very thankful that Homeless Cars was not only searching for somebody, but it was something that was near and dear to my heart. I’ve been very thankful for the opportunity to take it over.”

What she does
Dr. Samantha Winemaker, a palliative care physician in Hamilton, is on a mission to change the way the healthcare system treats patients facing terminal illness. In 2021, Winemaker and a colleague launched The Waiting Room Revolution, a podcast about unlocking the secrets to a better illness experience. Since then, Dr. Winemaker has amped up her game even further on several social media platforms, where she is a strong and passionate advocate for change.

Why she does it
When Dr. Winemaker began practising palliative care medicine 19 years ago, she enjoyed the high of coming on to the scene when things were dire, “when the only thing I could do was help with their symptoms in a way that felt like heroism.” Patients would often hug her and thank her for coming.

“It is such a feel good experience, when you make people feel better instantly when they’re so desperate. But the truth is that quickly turned dark to me,” she said.

After starting to feel “like I was at the end of a river in a cesspool—the river being healthcare when people were spit out and I was supposed to stitch people back together ... and the poor patients and families didn’t even know that it shouldn’t have been that way,” she tried, at first, to change the system from within.

For years, Dr. Winemaker tried sitting on committees; writing articles; and influencing the medical students, residents, doctors and nurses she was teaching, but when her efforts were not producing the outcome she’d hoped for, Dr. Winemaker decided to turn to the public.  If patients and families demanded a different type of interaction with the healthcare system, she thought, then change might be able to happen. A Toronto publisher dissuaded her from writing a book until she had first built up a network of support, which is why she turned to her two daughters “who helped me understand that the power of what I could do with social media is much bigger and faster than any other avenue.”

The M.A.I.D. factor
Another development that catapulted Dr. Winemaker into action was the legalization of assisted dying.

“There are too many people who end up feeling helpless, hopeless, worthless, and that life is meaningless at the end of life.”  Winemaker said it scares her to see an “unbelievable” number of Canadians asking for assisted dying “because they don’t know what they don’t know,” and she’s seen innumerable of people change their minds about asking for MAID (medical assistance in dying) once she’s been able to help them understand that it’s possible to have a meaningful life “even through a serious illness.”

Her impact
Dr. Winemaker has amassed more than 30,000 followers on TikTok and thousands of followers on her Instagram and Twitter accounts.

“To me, it’s less about the numbers and more about the affirmation that I get from the comments that people make like, ‘I’m so grateful that I found you,’  ‘This has made such a big difference for me’ or ‘I finally understand what happened last year.”

Even more than the affirmation, Dr. Winemaker said the comments and reactions to her social media posts have helped shift her advocacy from her original focus on palliative and end of life care to the bigger question of empowering patients right from the beginning of the “very foreign system called the healthcare system.”

Roots of her activism
“I really do believe it has been born out of my exposure to patients and their families and what I see as unnecessary suffering due to the healthcare system or due to our societal death-denying propensity. I’m 52 and I might be having a swan song. I’m a woman who’s learning from my two girls who are going through a lot of social activism and I think it’s just a combination of all these stars aligning.  I have suddenly felt a huge fire within me and it doesn’t come from decades of community activism. It came as a perfect storm at the right place, at the right time, and with the right opportunities.”