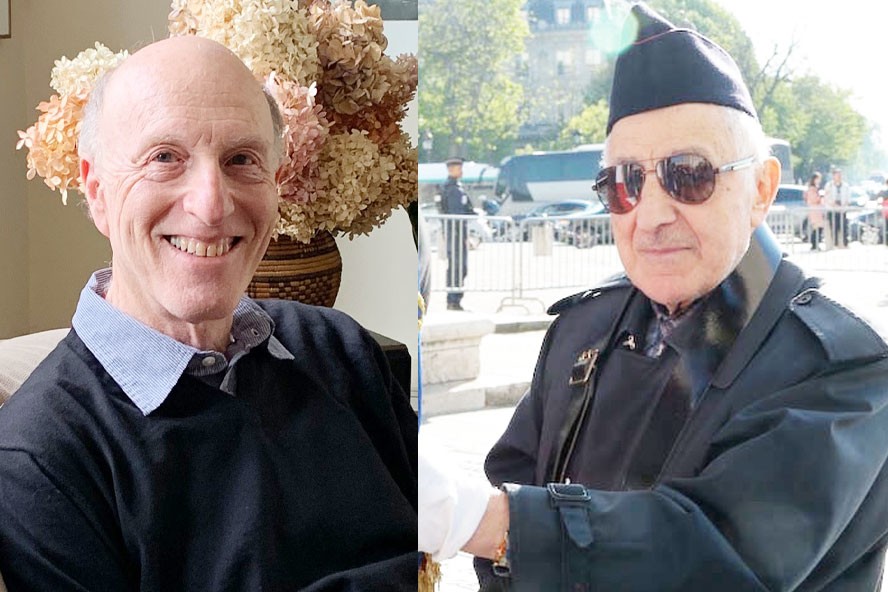 This story begins with a name on a wall. A name on a wall in a very cold and nearly empty synagogue in Bayonne, France on a cool but sunny Shabbat morning in early March, just before the world began to take COVID-19 seriously. It was an Ashkenazi name in a 19th century Judeo Portuguese Temple, a name I pronounced in the Ashkenazi manner, forgetting that in France the sound of words matters, so the ending of ‘Ginsburger’ is pronounced ‘jay.’

Ernest Ginsburger was the Grand Rabbin, the Great Rabbi, of Bayonne. He arrived there in 1930, a 54-year-old widower with two small children, already famous for his scholarship. He was arrested there in 1942 by the occupying German authorities on charges of scheming against Germany. In February 1943, after nine months of detention as a political prisoner, he was transported to Auschwitz where he died within hours of stepping onto the railway platform.

These are hard facts easily obtained through simple online searches. But could I write about Ernest Ginsburger in a way that would interest my readers? Actually, I was having trouble writing about anything during my initial weeks of quarantine and province-wide lock down. I wanted to write. I wanted to return to some semblance of regular life where I would have research and work that would fill the hours of the day.

In distancing myself from the reality of the here and now, I wrapped myself up in Bayonne and its Jewish past. I considered writing about how Converso Jews, a step ahead of the Inquisition, arrived in the city in the late 15th century, turned their backs on Spain and Portugal and claimed their Jewish faith again. Or about how and why the Jewish community grew and prospered over time, reaching its peak in the mid 19th century, when it began to decline. Its grand Temple, built with pride and confidence in 1837 is now in disrepair, its aging congregation shrinking year by year like small Jewish communities everywhere.

It was while stumbling along these paths of inquiry, still not knowing where I was going, that I made an unexpected discovery.

The descendants of the Judeo Portuguese communities in France built three major ‘Temples’ in the 19th century, known as the three ‘B’s for their locations: Bayonne, Bordeaux, and Buffault. Temple Buffault is actually in Paris, on the Rue Buffault in the fashionable Opera district. The Temple’s website is rich with information on the history of the Jews in France, architectural periods in synagogue design, and more. But it was while browsing the Contacts page that I made my most important discovery: I found the Ginsburger name again.

‘I am the son of Ernest Ginsburger and a Second World War veteran,’ Philippe Ginsburger replied.  Then he offered me a book that his father had written on the Jewish community of Bayonne along with a promise to show me his synagogue when we returned to Paris at the end of the pandemic.

I was first struck by the warmth and incredible generosity of his reply; then by the recognition that if Philippe Ginsburger was the son of the Rabbi and a veteran of the Second World War, he had to be … old.  Just how old, I wondered. The answer came a few weeks later, in the biographical introduction to Ernest Ginsburger’s history, Les Juifs de Bayonne. Philippe was born in 1922. My correspondent was about to turn 98.

When sociologists analyse the dynamics of friendships, they distinguish between strong tie and weak tie connections. The relative strength of the tie is likely a combination of four factors: the length of the relationship, its emotional intensity, the degree of intimacy or emotional sharing, and the ratio of shared giving and taking that occurs.

Philippe, a stranger, had opened a door. In my reply, I spoke of the research I was doing, my personal connection and attachment to France, and the work I had already completed. ‘Your father’s book will be a great help to me,” I concluded. ‘So would an ongoing conversation, and perhaps a long-distance friendship, if you are willing.’

Re-reading this now, I am surprised at my boldness and that I spoke of ‘friendship.’ I do not use ‘friend’ easily. I have argued with others — sometimes heatedly — when they used it to describe what I considered casual connections with people I’d call ‘acquaintances’ if I characterized them at all.

For whatever reason, Philippe did write back and our email exchanges increased. Our early conversations focused on my questions about events or details – the who, what, and when? – mostly about his father’s life or the Bayonne community. But even in these early letters, I found myself giving information in return, making connections whenever I could.

The more I write, the better I understand that stories need people just as much as people need stories. Readers look for a human connection, if only as an anchor for whatever idea or subject is to be the writer’s focus. If I was going to write about Ernest Ginsburger, I needed more than facts. I needed a sense of his inner life, and how his personality and tragic death affected those closest to him. I knew that these questions would be difficult for Philippe, even though the actual events happened decades before. I knew this because when discussing his own life during the Second World War, whether as a ‘resistant’ hiding in the hill country of central France or as a much decorated ‘combatant’ fighting the German army in bloody final stage battles before Liberation, he always focused on factual details, never on his feelings. And I needed to ask for just that, for a sharing of feelings. ‘Now comes the really hard part,’ I wrote, ‘because it is so personal.’

I believe that if you ask someone to share their feelings, you should be prepared to give no less in return. So I told Philippe this story about myself:

When I was a child, my father told me that his mother and two brothers had been ‘lost’ in the War. He didn’t talk to me about the Holocaust, and we were not yet using the word Shoah. Because I was a child who loved his father, I wanted very much to ‘find’ them for him. Every time we travelled, I would look in the telephone book to see if I could find their names, call them, and return them to him. I did that for a long time, even when I knew better.

Then I waited to see how Philippe would reply.

‘I am able, as a very old man, to answer your questions,’ his email began. And so we move forward.

Perhaps being isolated in this time of COVID adds intensity to an appreciation of friendship; maybe it makes us recognize and even acknowledge our need for connection with others. In our case, maybe it’s the distance; maybe it’s the very real consciousness of time. Whatever drives Philippe and me, our conversations continue week after week. I eagerly anticipate each email. I hope he does too.

“There are always more questions” I wrote in one of my subject lines.

“There is always an answer,” he replied.