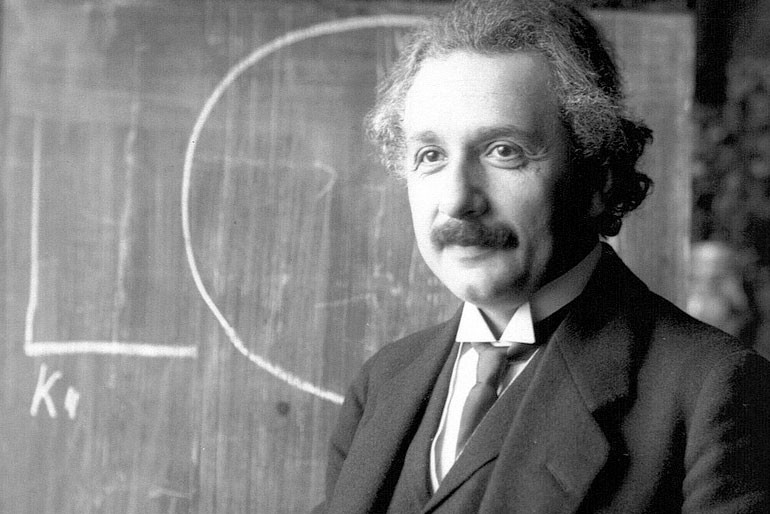 Last year, I gave a lecture on Albert Einstein in my class on the history of astronomy and cosmology. Einstein’s relativistic physics is a cornerstone of our current understanding of the cosmos, so it was natural to include this material in my course. After a little deliberation, though, I also chose to include Einstein’s experiences with antisemitism in the lecture. Long after relativity theory had made Einstein an international celebrity, Einstein continued to face criticism that focused on his Jewish heritage, particularly in his native Germany. Nazis and their sympathizers decried his “Jewish science,” with its unusual ideas about the relativity of space and time, which they believed undermined the more credible “Aryan science.”
After class, a student approached me and asked a question that surprised me: Where did all this prejudice against Jews “suddenly” come from in the 1920s and 1930s? Why would the Jews be singled out in the scientific community? I ended up explaining to the student at length that the growth of antisemitism in Europe was anything but sudden. Rather, its roots extended back as least as far as the Middle Ages, when Jews were expelled from numerous European cities and regions. This wasn’t what I had expected to focus on that day, but as an historian and a Jew, I was more than willing to have the discussion.
Einstein’s troubles remind us that even science, which is typically celebrated as objective and value-free, has often been plagued by prejudice. From the 1920s onward, he and his “Jewish science” were routinely subjected to openly antisemitic criticism. These attacks were senseless for many reasons, one of which is that Einstein’s science wasn’t particularly “Jewish” and neither was Einstein himself. Born into a non-practicing Jewish family in Germany, Einstein rejected Judaism and, indeed, formal religion altogether at only 12 years old, when he decided that the biblical stories he had been taught were scientifically impossible. As a result, the young Einstein refused to proceed with his Bar Mitzvah.
Yet it would be too simplistic to say that Einstein wasn’t religious. In fact, he consistently claimed to be religious, but for him this meant believing in a ubiquitous, impersonal force that structures the universe. Einstein was sympathetic to the ideas of Baruch Spinoza, the seventeenth-century Dutch philosopher, who argued that God and Nature are two aspects of the same thing (though he stopped just short of saying that God simply is Nature). Spinoza, a lapsed Sephardic Jew himself, also claimed that free will is an illusion and that everything that occurs results from the laws of Nature.
All of this appealed to Einstein, who also believed in a deterministic universe governed by precise mathematical rules. However, as he explained in his essay “Religion and Science,” which was published in the New York Times in 1930, Einstein experienced a “cosmic religious feeling” when he investigated the mathematical beauty and complexity of the universe. He also seems to have believed that society needs religion just as much as science. Between the two, he claimed, only religion provides concepts of morality and justice. During a conference presentation on science and religion in 1940, he famously remarked, “Science without religion is lame; religion without science is blind.”
Yet, although Einstein was tolerant toward religious believers and considered himself “religious” in his own way, he was not a practicing Jew, much less a proponent of “Jewish science.” The Nazis, of course, regarded Einstein as a Jew anyway: he had been born Jewish, and this inevitably tainted his science. Thus, while some critics denounced him as an atheist, the Nazis interpreted Einstein’s “religion” in a different way to serve their own purposes.
What is especially troubling is that Einstein’s antisemitic detractors included high-profile German scientists. One of his most vocal critics, Philipp Lenard, won a Nobel Prize for Physics in 1905, the same year that Einstein published his special theory of relativity. An ardent Nazi, Lenard complained that Einstein exemplified a “Jewish” style of physics that featured too much mathematics and theory and not enough experimentation. This Jewish physics, he believed, was undermining German science. Lenard also claimed that the theory of relativity was incomprehensible, and that its popularity was due only to a Jewish conspiracy.
There was nothing subtle about the prejudice behind such attacks on Einstein and his work. In 1920, Einstein debated Lenard and had to contend with antisemitic demonstrations at the event. Two years later, fearing for his safety, he refused to speak at the same conference. In 1933, while Einstein was visiting the United States, Hitler rose to power and Einstein realized that he couldn’t return to Germany. He took up a position at the Institute for Advanced Study in Princeton, where he worked for the rest of his life.
This was an uncomfortable topic to address in class, to say the least. But I consider it essential to examine the biographical details of a scientist’s life, since these details offer invaluable lessons about how the world of science works. Einstein’s experiences can help us to see the impact of prejudice on the way science is conducted and discussed. As much as we value science, we have an obligation to evaluate it critically like any other feature of the modern world. This means keeping an eye out for hateful, prejudicial ideas—whether antisemitic or otherwise—in scientific discourse.
Any reader who is eager to learn more about Einstein’s religious views should consult Max Jammer’s Einstein and Religion: Physics and Theology (1999). On Einstein’s struggles with Nazis, see Philip Ball’s Serving the Reich: The Struggle for the Soul of Physics under Hitler (2014).
Adam Richter is an historian of science who teaches at the University of Toronto Mississauga. His research focuses on the relationship between science and religion. He grew up in Hamilton and now lives in Burlington.