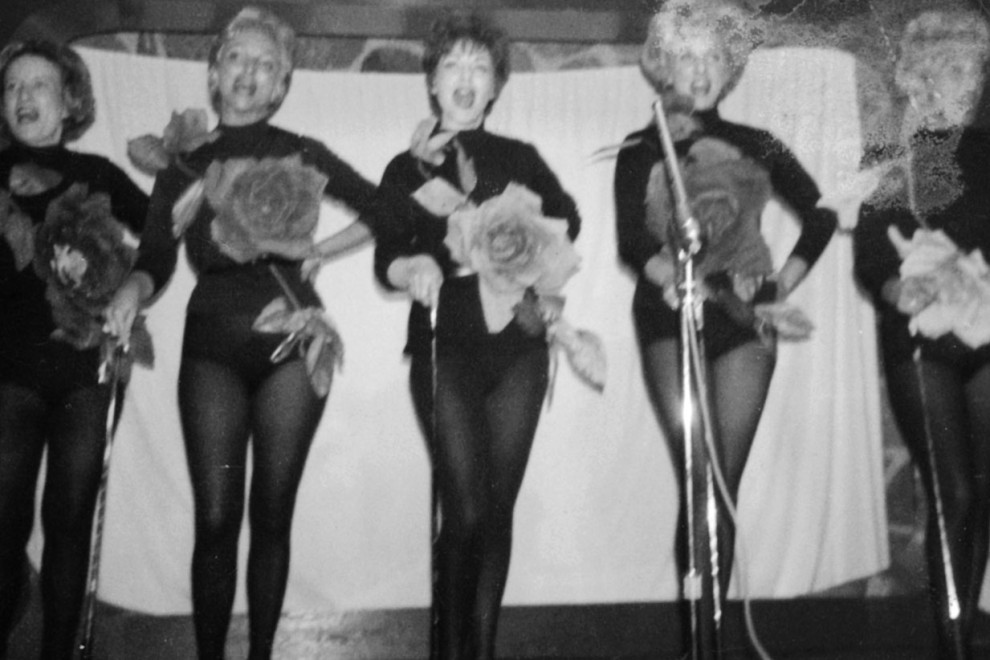 In 2000, Hamilton native Amy Back staged her first parody musical for Beth Jacob Synagogue.  In doing so, she continued a tradition started by her mother more than 50 years earlier.  Over the course of two generations, Amy and Muriel Back have been staging comical musical theatre productions for an appreciative Hamilton Jewish community.

Born in 1920s Brooklyn, Muriel Wald always loved the theatre, performing in some Yiddish shows during the golden age of New York’s Jewish theatre scene.  Frequenting Broadway shows in her youth, Muriel easily learned many of the tunes featured in the productions.  Then with her acerbic wit, she would reconfigure the lyrics with her own, often silly, lines.

During a visit to Canada in the 1940s, Muriel was introduced to Torontonian Harold Back.  The two hit it off immediately and after a long distance courtship, the couple married in 1947.  Originally living in Toronto, the Backs relocated to Hamilton in 1955.

After joining Beth Jacob Synagogue, it wasn’t long before Muriel began using her comedic talents to benefit the shul.  Having seen the smash musical My Fair Lady when it first hit the stage in the mid-1950s, Muriel revived her old hobby of revamping the words of the show’s musical numbers.  She reimagined the play with Eliza working to eliminate her European Yiddish accent.  With songs like “The Chrain in Spain, “The Shul Where you Live” and “Just You Wait Tyrone Ginsberg,” Muriel’s production of My Feh Lady was born.

After discovering the theatrical talent in the Jewish Hamilton community, Muriel no longer performed in her own shows. Retreating behind the scenes, she wrote, directed and choreographed the productions, allowing the gifted performers to shine.  With a skilled group of actors, singers and dancers, such as Helen Greenbaum, Hy Caplan, Lillian, Sondi and Barbara Goldblatt, Marvin Karon, Helen Levy, Sandi Fuss, Max, Nancy and Sharon Mintz, Andy Back and Al Foreman among others, over the next several years, Muriel wrote and produced several shows for Beth Jacob Synagogue and the Beverley Golf and Country Club, including Westdale Story and Hans Chaim Anderson, a satire of the Danny Kaye film Hans Christian Andersen.

One of Muriel’s most memorable projects was an extravaganza that featured restauranteur Max Mintz singing “Avinu, We Need a Shul” to the tune of the Yom Kippur prayer “Avinu Malkeinu” and soprano Lillian Goldblatt belting out:

As Amy entered adulthood, she left Hamilton for more than 25 years, pursuing an acting career and completing a degree in sociology and theatre in Boston.  Eventually withdrawing backstage, she shifted her focus to theatre management.  After leaving the theatre, she spent time living in both New York and Miami.

Amy returned to Hamilton after her father’s death in 1994  and began caring for Muriel, who was experiencing health issues.  Despite her illness, in 1996, Muriel decided that she wanted to create a new show for Beth Jacob.

“She had taken a break from doing shows, but she started writing the Phantom of the Synagogue,” recalls Amy.
Muriel enlisted Amy’s help to develop the show.  ”I had never participated until then.  Other than a poem here and there, I had not written anything.”

In their rendition, the Phantom had been burned by the Shabbos lights, which was why he was living in the synagogue basement.  Christine had been adopted and eventually discovers that she is Jewish.  So as she becomes involved at the synagogue, the Phantom kidnaps her in order to force her to sing Kol Nidre.  “We didn’t have a full script.  We had some songs partially done and that was as far as it went.”  Sadly Muriel died in October 1997 and the show was never produced.

Within 10 years, Amy had lost her entire immediate family.  Her brother, Andy died in 1988, followed by her brother Michael in 1991.  Her father Harold died three years later, with Muriel three years after that.

Amy persevered by adopting her mother’s enthusiasm for staging productions.  “At that point, I had not set foot on stage or done any theatre for 25 years.”

In 2000, Amy produced her first show, a charitable benefit for Beth Jacob.  There’s No Business like Shul Business became a roaring success.  Selling out more than 600 tickets for the show’s only performance, Amy had to relocate to a larger venue at the last minute.  “Although I had directed scenes at university for my degree, it was my first time directing a whole show. It was a great experience for everyone involved.”

In 2015, Amy established a computer support company and scaled back many of her creative activities, but she has written and performed two one-woman plays in Toronto and has published some of her poetry.