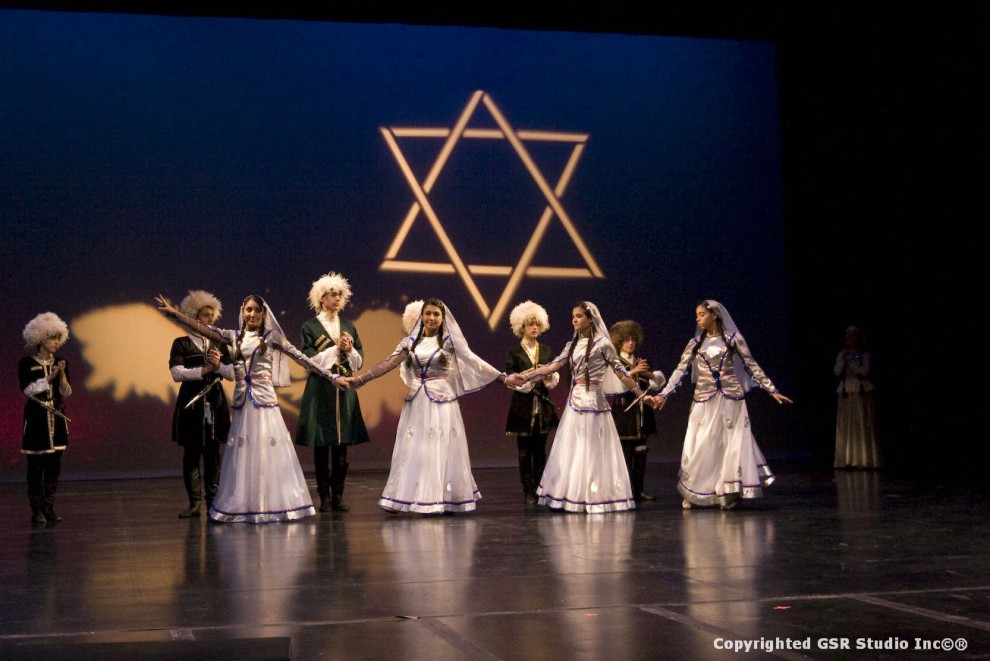 Straddling Europe and Asia, the Caucasus lies at the crossroads of the traditionally Christian and Muslim worlds. The North Caucasus, while part of majority Orthodox Christian Russia, is largely Sunni Muslim. The South Caucasus, which borders Turkey and Iran, consists of the independent post-Soviet states of Azerbaijan, Georgia, and Armenia, and includes some of the world’s most ancient Christian communities.

Yet the Caucasus has also been home to a tenacious Jewish minority for well over a millennium. The Mountain Jews (also known as Gorsky, from the Russian word for “mountain,” or Kavkazi, from the Hebrew word for “Caucasus”) likely originate from Jews who moved to the Caucasus Mountains from Persia, since their traditional language is related to Persian. Neither Ashkenazi nor Sephardi (though they follow the Sephardic rite), Mountain Jews have maintained their own unique identity under the rule of Persians, Turks, and most recently, Russians.

Today, the majority of the world’s estimated 200,000 Mountain Jews live in Israel, having left the region after the collapse of the Soviet Union; though an entirely Jewish town called Krasnaya Sloboda (“the Jerusalem of the Caucasus”) still exists in Azerbaijan. Most North American Mountain Jews live in New York City, but Toronto is home to a vibrant community as well.

According to Tehila Nissanova, Co-President of the Women’s Council for Toronto’s Jewish Caucasus Community Centre, there are approximately 450 Mountain Jewish families in Toronto, or about 2,000 individuals. In addition, there may be about 20 Mountain Jews in Montreal, and 10 to 20 in other parts of Canada. Religiously, she says, most identify as Orthodox or traditional.

“Mountain Jews started to immigrate to Canada in the mid 1980s from Israel,” Nissanova recounts. “Mass emigration from the former Soviet Union started in 1991 during its collapse. About half of the Mountain Jewish diaspora is from Azerbaijan (specifically, the cities of Baku, Kuba, and Qusar). A quarter were residents of Derbent (Dagestan) and the remainder were residents of different towns in Dagestan, Kabardino-Balkaria, Chechnya, and Stavropol Krai [all part of the Russian North Caucasus].

“Approximately five to seven per cent of Mountain Jews arrived in Toronto directly from the former Soviet Union. The remainder came to Toronto from Israel.”

The ancestral Mountain Jewish language was commonly called “Tat” during the Soviet era, after a similar language spoken by a neighboring Muslim people. However, today the community prefers the term “Juhuro,” which, like “Yiddish,” literally means “Jewish.”

Like other newcomers, Mountain Jews faced significant challenges upon arriving in Canada—especially as many are two-time immigrants, having moved from the former Soviet Union to Israel to Canada.

“Community members faced problems with employment and language barriers,” says Nissanova. “People attended English-language school and attempted to find employment. Of course, former teachers, doctors, and engineers did not have the opportunity to work in their profession, as it would take many years of education to receive a Canadian licence.”

Nissanova describes the global Mountain Jewish diaspora as closely connected through stmegi.com, the online hub of the Moscow-based STMEGI cultural foundation. Canadian Mountain Jews attend celebrations and conferences in Israel, Russia, and the US, including the annual Community Day in Brooklyn.

In 2007, the Toronto community hosted a charity event called the International Children’s Talent Show, which featured the Canadian debut of New York’s Kavkaz dance troupe. The community has also participated in local festivals with its own children’s troupe, which performs folk dances like the Lezginka, and held a seminar and culinary workshop with the Toronto UJA Federation.

Canada’s Mountain Jews form a unique and culturally rich part of the country’s broader Russian-speaking, Israeli, and Canadian Jewish communities. They are dedicated to passing on their Jewish and Caucasus traditions to the next generation, and eager to share their stories with the world.