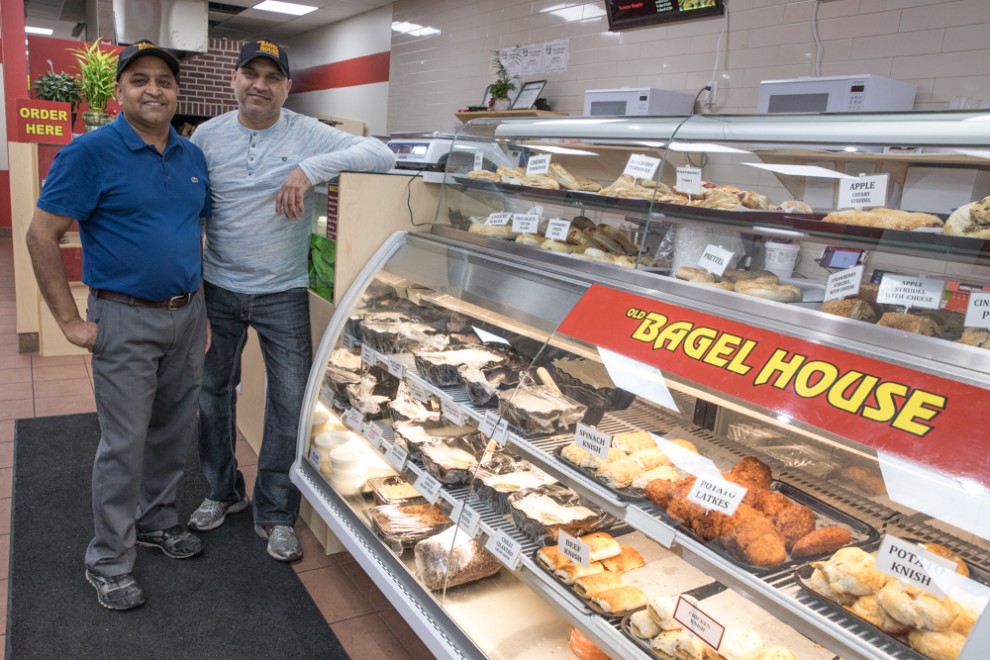 When they first arrived in Canada, bagels were among the first things that the owners of Dundas's new Old Bagel House, Jeet Gandhi and his partner Jerry Rai, learned about.

Gandhi arrived in Montreal in 1997 to study electronics and worked part-time at the city’s famed St. Viateur Bagel Shop, learning the secrets of the famous Montreal-style bagel.

(For the uninitiated, Montreal bagels contain malt and egg but no salt and are boiled in honey-sweetened water before being baked in a wood oven. The chief varieties are poppy and sesame seed. New York bagels are made without sweetened water.)

Devotees of Montreal bagels can be passionate about their treat.

Gandhi was mentored in the bagel business by a Holocaust survivor in Montreal, and while their relationship was one of sharp ups and downs, “after a couple a years we had a father-son thing happening.”

“At first I had no idea what a bagel was,” he said. I think I fell in love with the fire first,” he said, speaking of the fire in the store’s wood oven. “By a stroke of luck, it all worked out.”

Initially assigned only to preparation work in the store, he taught himself the art of bagel-baking, eventually convincing his mentor he was ready for more challenging tasks.

With time, thoughts of working in electronics faded and Gandhi devoted himself to the bagel business, eventually moving to Toronto and opening a store on Yonge Street near St. Clair “where people knew only Tim Hortons.”

During that time, he also connected with Rai who stepped up to help him when his home was damaged by a fire in a neighbouring building.

“A couple of years back, he picked me up when I was really vulnerable,” Gandhi said. “I’m an old school person who remembers things like that.”

Rai had learned the bagel business working for a brother-in-law in Toronto.

The two quickly became closer than brothers and then business partners looking for places to expand their businesses beyond Toronto and Mississauga. They thought about St. Catharines, Niagara Falls, Burlington or Oakville and one day started out to scout locations, but an accident on the highway forced them off the QEW and into Dundas.

While driving around utterly lost, they came across University Plaza and the site of the former Great Canadian Bagel shop.

Their original plan was for a $200,000 renovation of the store – but a misunderstanding about the floor’s ability to support the massive wood-fire oven they wanted to install turned the project into a $500,000 deal.

“We had to just go ahead and do it,” Gandhi said. “If we can’t put the oven in, then we can’t make bagels.”

The oven was installed and the store opened in September. Today, like all newly-minted entrepreneurs, the partners basically live in the store, leaving for quick showers at a health club before returning to work.

Today, the business has grown to the point where they sell more than 2,600 bagels a day – 220 dozen to a customer base sometimes coming from as far away as Kitchener and Brantford for the menu of 14 different kinds of bagel, plus sandwiches and pastries.