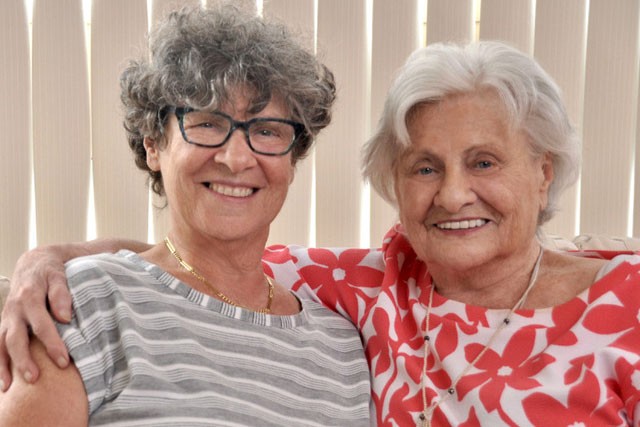 For nine months Agi Meinhard dreamed, experimented, and agonized over a very special birthday gift for her mother Martha Gottlieb’s 94th birthday on June 2 of this year. Meinhard often heard her mother reminiscing about the beautiful synagogue she attended as a child in Debrecen, Hungary. By chance, while visiting Pompano Beach Florida, Meinhard saw exquisite balsa wood replicas of synagogues destroyed in Europe during the Second World War.

That sparked the idea to replicate her mother’s beloved and destroyed synagogue in clay, a medium she had been sculpting with for several years. In October she began her research, looking for pictures of the synagogue on the Internet. She was fortunate to find an article in the journal, Hungarian Architectural Digest, in which the Debrecen synagogue was featured. The article had the actual architectural drawings of the synagogue, and from that she was able to figure out a schematic to scale of the original building. She also found a newspaper article from 1897, describing the dedication of the synagogue.

The cornerstone was unveiled and read by Meinhard’s maternal great grandfather, Joseph Burger, scribe for the congregation.

Meinhard has found clay sculpting to be an utterly compelling and fascinating art form and has progressed with the skill over the last eight years. Her first instructor encouraged her to start by closing her eyes, massaging and feeling the clay, and then “see what the clay tells you.”  Meinhard has the artist’s ability to see quite a lot.

Now began Meinhard’s  real challenge. Working on a weekly basis, the sculpture took form from the ground up. She gives great thanks to her teacher and mentor, Jim Hake, who is associated with the AGO. The clay work, as it grew, had always to be encased in plastic so as not to dry out. It was a continual learning curve as Meinhard learned what worked and what didn’t sometimes having to start parts all over again.

The piece is about seven inches wide and 10 inches deep and because it is made out of clay and fired, it is fragile. After the walls replicating the three-story building, were completed, Meinhard and her instructor had to figure out how to make the dome—not only its unique shape, but how it would be supported and keep its shape. Not unlike real architecture. 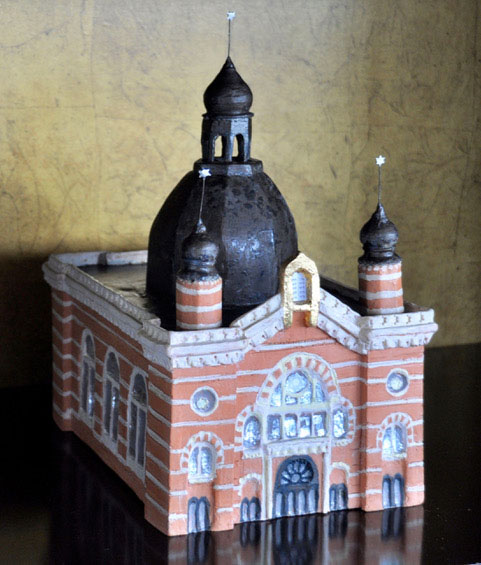 The façade of the building is exquisitely executed in the colours of the original building. Two short side towers embellish the front with miniscule stars of David held above by small copper staffs.

Needless to say, Martha Gottlieb is thrilled with her daughter’s priceless and loving gift. And Meinhard is justifiably proud of her achievement.

A version of this article first appeared in Toronto’s Manhattan Matters publication.