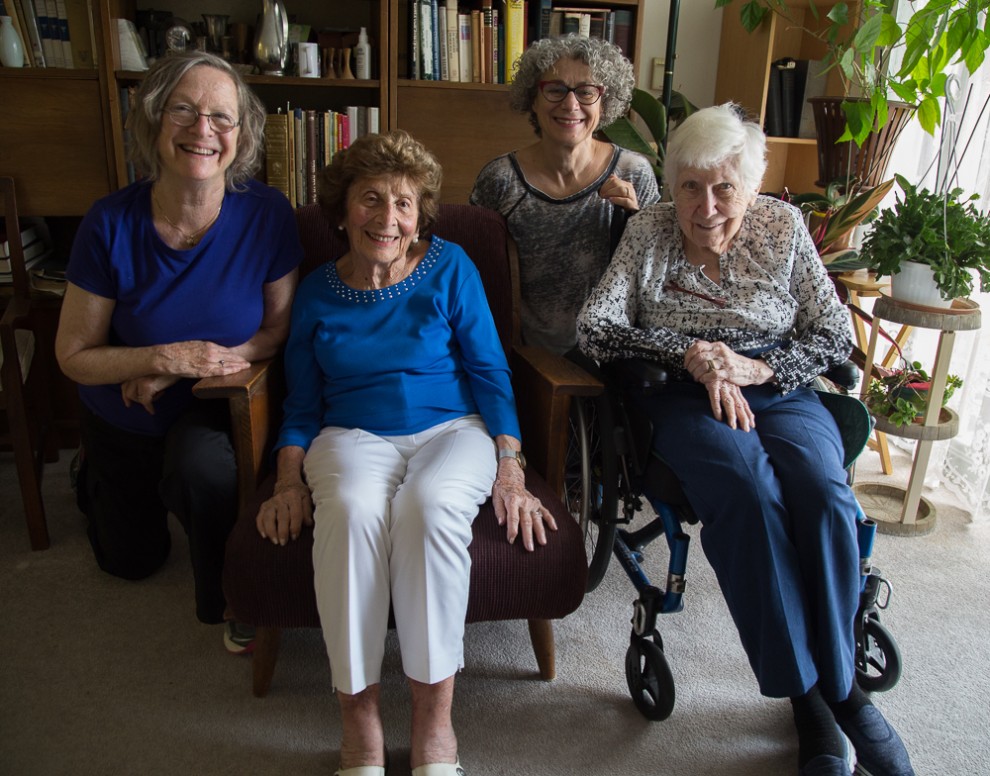 September 2017
by Simone Rotstein with Pat Dermer and Sylvia Jacobs

The doors open automatically as we enter Shalom Village. We greet an elderly gentleman sitting in one of the two wingback armchairs in the lobby. “Beautiful day isn’t it?” we ask.

“Yes,” he replies. “I’m waiting for my ride.” We chat briefly, make our way past the receptionist, welcoming us with a cheery ‘Hello’ and go up using the elevator.

We knock at the door and let ourselves into the apartment. Ahuva turns her wheelchair to face us, a broad smile emerges and her eyes twinkle. She is nicely dressed in a skirt and a colourful print blouse, her hair, like freshly fallen snow, is well-groomed and she is ready for our Wednesday afternoon study group.

Ahuva’s home reflects her scholarly life. Bookshelves are lined with ancient texts in both Hebrew and English as well as classic literature and modern authors. A small table holds the Babylonian Talmud, bookmarked at the spot currently being studied. Yet another table is laden with large print reading as well as audio books. This is a home where reading and study are an everyday occurrence.

The study group began in 2007, when Sylvia Jacobs phoned Ahuva Soifer, “Would you be interested in forming a Jewish study group?”

Ahuva was eager to be teaching and studying again. “Yes, I would. You know, Sylvia, there has to be a commitment here. This is serious business. We’re going to be studying, not socializing. Would you be willing to deliver a drosh on the portion we are learning?”

They invited Ruth Goldberg to join them and the three women set up the parameters for their group. It would be held every Wednesday at 2:00 pm at Ahuva’s apartment. Before Sylvia and Ruth arrived, Ahuva set out a glass of water at each of their places. She asked them if they would like something to eat. “We didn’t come to eat, we came to study,” Sylvia and Ruth replied and they devoted an hour and a half on the study of Jewish text.

Unfortunately, Ruth passed away and, in 2011, Ahuva phoned Simone Rotstein. “Are you interested in studying with us? There are only two of us and that isn’t enough for a study group.” By that time, Ahuva’s deteriorating vision was causing reading difficulties. Yet, she remained stoic and tolerant as she listened to two keen women mangle her beloved Hebrew language while studying Jewish text. In 2015, Pat Dermer joined the group and we became a foursome.

Ahuva is a challenging teacher. She skillfully explains the text using questions and drawing attention to the Hebrew words and their possible meaning. “What is the root of the word?” she implores us, forcing us to examine the text more critically. “How is it used here?”

She loves the Hebrew language and is well informed on Torah. She demands that the text, be it a parsha or a haftorah, be read in Hebrew and that the Hebrew be understood. Then, she skillfully elicits a discussion. How does it relate to our lives? Can we understand it a different way? Invariably, the conversation veers into politics and the state of the world. Ahuva’s political views lead to a lively, stimulating discussion. Everyone has the opportunity to state her opinion and to listen respectfully to others. Ahuva’s compassion shines through as she guides the discussion, always accepting diverse views. The only things absent are gossip and attempts to best each other.

In the years together, we have studied much of the Torah, spent time on several of the Prophets, read parts of Pirké Aboth and discussed poetry and current events. Time has left its mark on all of us. We have suffered losses and dealt with health issues. Ahuva is now in a wheelchair. At times, she covers her face, frustrated with her difficulties recalling words and announces, “This is the end of the study group. I can’t teach any longer.” Still, we continue and Ahuva’s eyes sparkle and her mind sharpens as she recalls information.

Recently, we have been studying the parsha of the week and she begins each study session asking, “Who has read the parsha this week?” We no longer read in Hebrew or parse the meaning. We recount the text, question things that interest us and discuss their implications. Ahuva invariably has something thought-provoking to add. She remains an inspiring and ethical teacher.