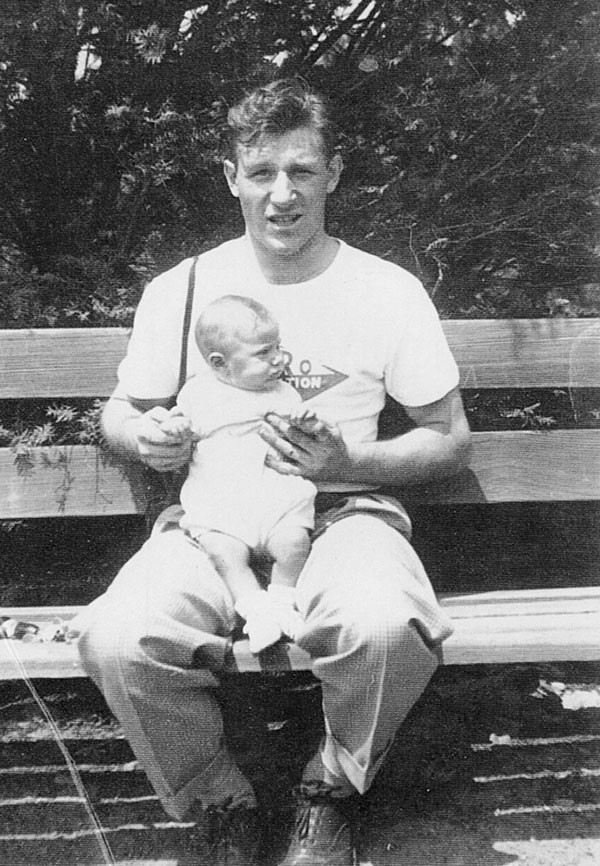 by Linda and Max Ander,  Special to the Hamilton Jewish News

When my dad was in Florida in the winter of 2008, I asked him if he would be willing to share some of his life experiences.  I believe that story writing is a good way for people to gain a perspective on what has happened in their lives.  Everyone has a story to tell and it is a matter of finding a way that allows a person to comfortably share it.  When I wrote to my dad I had already interviewed six seniors and edited their stories. I asked each person to tell me about a time in their life when they had an important decision to make and how they knew the path they chose was the right one for them. I suggested that this type of self-reflection can sometimes produce a “eureka moment” or moment of clarity that can feel like a spiritual experience.

My father grew up in pretty grim circumstances in Hamilton and in spite of great poverty and challenges he became an Ontario champion wrestler and a winner in the Maccabia games. He always worked hard and together with my mom, raised five children. He built a thriving business. He had so many accomplishments that it was a bit overwhelming for him to figure out how to get started.

I told him to choose one event in his life to begin with and write about how he dealt with it. Start small and don’t worry about how long you make it. I reassured him that dredging up old memories would not make him depressed.  Writing your own story can be very empowering when you realize how you were able to overcome life’s challenges. Sitting at the computer in the community centre in Aventura, Florida my father revisited his past and made peace with his life in the process.  Here are a few excerpts from the story he calls, A Search for Meaning.

My father was a shoemaker
I was born on Nov.6 , 1926 at 21 Railway Street in Hamilton in a modest home to parents who had come from Poland.  My father was 48 years old and my mother was 20 years his junior.  My older sisters Mary and Bertha were three and two and my step- sister Rose was 16. Rose was born in Poland and her pregnant mother and older brother died of an infectious disease before my father could bring them over to Canada. Once the war had ended Rose was reunited with her father who had by that time married my mother, Annie.
The first and only toy I had was a shoemaker’s hammer and box of nails.  My father repaired and replaced soles and heals, stitching, stretching and dying the shoes.  I went with my dad when he was peddling during the summer.  He would call out “rags, bones and bottles” over and over.  We were ridiculed and called names and I found this to be humiliating. My father was observant and studied at the synagogue.  He was a hard worker.

The kid is named Max
A mohel was brought from Toronto because he was more qualified than the locals who did circumcisions.  I was named after my father’s father Mendel, and thus was given a Yiddish name.  My sister Rose was honoured to hold me following the procedure.  Railway Street where I lived had an ethnic mix mostly of Italian and Jewish people.  There were two synagogues within walking distance on Cannon and Hess streets.  We had two groceries nearby, a playground across Cannon Street, Hoffman’s scrap metal yard next door and another scrap metal with an icehouse.  The railway tracks ran along the street down the hill to the scrap yard and asphalt plant. This was not the finest neighbourhood.

Mrs. Dingwell probably saved me
In everyone’s life there are people that are most influential and memorable.  Mrs. Dingwell selected me to be part of both a school choir and a quartet.   She was a wonderful teacher, not very attractive but her smile and pleasant personality got the best out of us. Our choir became quite good.  We competed in a Kiwanis competition and our quartet sang to all the classes at Christmas time. I remember singing “ Oh come all Ye Faithful”.  My father would have had a fit had he known that I was singing a Christian song, as he was quite religious himself.  He never heard me sing at school.  My teacher treated all of us as worthwhile and her caring countered the abuse I received at home.  She saved me from the anger and distress I felt at home and raised my self-image.  I learned to sing harmony and my love of music has lasted to this day and is an important part of my life allowing me the skills and confidence to lead services at synagogue.

Max Ander is a devoted husband, father of five, grandfather of 14 and great grandfather of four.  He had a successful career spanning many years in the flooring business. With his vast knowledge of the building industry he became hugely successful as a home inspector. He learned to read Torah later in life and continues to share his knowledge and skills by conducting services at synagogue and Shiva homes.