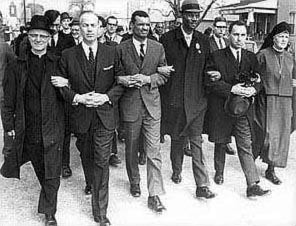 In 1965 the world was shocked by television images of American police beating peaceful Black protesters who dared to march in Alabama for the right to be treated as equals.

In far-away Hamilton, Ontario, a young rabbi watched those images and, in his heart, heard the voices of ancient sages calling for action.

Heeding that call, Rabbi Eugene Weiner quickly organized a small group of other Hamilton clergy and flew to Selma, Alabama where they linked arms with civil rights legends Martin Luther King Jr., John Lewis, Weiner’s former teacher Abraham Joshua Heschel and thousands of others to march for an end to American racism and bigotry.

The mission was recalled Sunday by members of Weiner’s former shul, Beth Jacob Synagogue of Hamilton. The commemoration occurred as another hero of the events, U.S. Congressman John Lewis, was taken through Selma one last time on his way to be buried.

As well as the ancient teachings of his faith, Weiner was responding to a call directly from King for religious leaders of all faiths to come to Selma.

In an interview with the Globe and Mail after his return, Weiner said he put himself at risk to advance the cause of social justice.

He was quoted as saying, “I personally feel that the church and the synagogue have been very remiss in their response to deal with the outstanding social issues. I agree with Dr. King that (the faith community) tends to be an echo rather than a voice and a taillight rather than a headlight.”

In addition to Weiner the Hamilton delegation included two Anglican priests, a United Church and a Baptist minister. They were joined in Alabama by two Unitarian ministers and the pastor of a Hamilton church founded in 1835 by escaped slaves and freedmen.

Costs of the five from Hamilton were covered, quietly, by Jewish businessman Ken Soble, founder of Hamilton’s CHCH-TV.

Baptist minister Alan Matthews was part of the group. On Sunday his daughter-in-law Ramona recalled how he joined the trip on a single day’s notice because, like Weiner, he thought the cause was right.

He had just returned from a four-day trip visiting convicts at Kingston Penitentiary, but a phone call from Weiner put him on an airplane the next day.

“They all believed that telegrams and marches in Toronto were no longer enough,” she recalled. “They went to proclaim what they thought was justice.”

The Selma events, history records, were actually three marches intended to carry the call for voting rights to the Alabama capital of Montgomery. The first, on March 7, 1965, became known as Bloody Sunday because of the savage response of state police as marchers attempted to cross the Edmund Pettus Bridge over the Alabama River. It was television images of police brutally attacking peaceful protestors that ignited public indignation and increased support for the marchers.

Matthews wrote of the events years later “I never saw such hatred.”

A second march on March 9 turned back after King saw the array of police waiting for them on the other side of the bridge. The third, on March 21, after the Hamilton delegation returned home, got to the state capital after four days, but only under the protection of National Guard troops under federal orders.

In the face of the violence directed at marchers, King’s instructions were, if attacked, they were fall face down and cover their heads with their hands.

“You are here to witness, not be abusive or to fight. Do not run away from the scene. You will feel and see hate — show love … do not retaliate. Peace, love will win.”

Weiner and the Hamilton clergymen arrived in Selma March 14 and on their second day Weiner stood in the pulpit of a local church at a memorial service for James Reeb, a Unitarian minister killed after the second march. As the rabbi intoned the sacred words of the Mourner’s Kaddish hundreds of congregants hummed We Shall Overcome.

One witness to that event recalled how, as Weiner finished the prayer “from nowhere there came two little Negro girls who began to sing a high piercing descant above our singing. The rabbi leaned down, picked up the four-year-old, and held her in his arms. And the tears flowed down my face. And all around him, people were crying.”

Weiner left Beth Jacob in 1969, moving with his family to Israel where he enjoyed a distinguished academic career as professor of sociology at Haifa University. He died in 2003 of cancer at age 69.

Today, 55 years later, the causes for which those tears flowed remain, shown daily in the wave of Black Lives Matter protests across the United States and in the calls for economic justice around the world among others.

The sentiment was captured by one of Sunday’s participants. Michaele-Sue Goldblatt, who grew up at Beth Jacob, recalled one recent protest she attended in Barrie where the sign she carried asked plaintively “I did this in the 60s. Why am I still doing it?”

Lyla Miklos, a Hamilton-based activist who joined other marchers in 2015 to mark the half-century anniversary of the Selma protests, said every generation seems to have an incident that sparks anger and protests.

For her it was images of Rodney King being brutally beaten by police officers in Los Angeles in 1991. For many today it is the image of George Floyd dying under the crushing weight of a police officer in Minneapolis earlier this year.

“Today it seems we are being bombarded by images of police brutality,” she said.

For Rabbi Hillel Lavery-Yisraeli, the current occupant of the Beth Jacob pulpit, the demand for spiritual leaders to take action on injustice is also unchanged.

“We have to do what we can” he said. “We cannot remain silent when we can speak up. “We must protest what we can protest. We must use our voices and voting power and our money.” 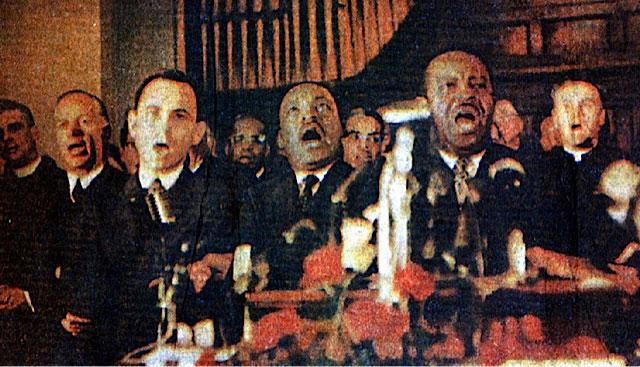