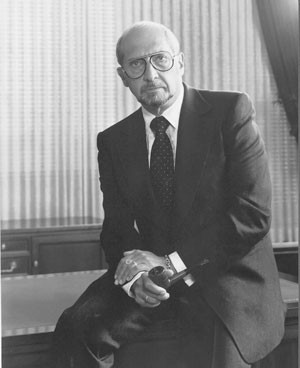 One could argue that Marvin Goldblatt was a softhearted, giving soul. Charities lined up at his door, and he found a way to share his family’s success with them all.

One could also argue that he was a crusty and profane egomaniac who always insisted on getting his way.

Those who knew him best affirm that he was both, but that the generous Marvin Goldblatt was the dominant character, and for some reason, the gruff Marvin Goldblatt did his best to hide his better side.

Under his tanned hide and gold chains the two characters of Marvin Goldblatt fought one another for 91 years, creating an energy and power that will long be remembered, and a legacy that will benefit the Jewish community and the broader community alike for generations to come, through philanthropic donations totaling into the millions, to Beth Jacob Synagogue, the Hamilton Jewish Community Centre, the UJA, the YMCA, McMaster University and other public institutions and, on a more private level, gifts that quietly helped individuals and families through hard times.

Unlike some characters whose irascibility is a simple mask protecting a kind and vulnerable heart, Marvin Goldblatt was actually irascible yet kind in all parts of his life. For all his outbursts and interruptions, he apparently listened far more than most people realized.

Wendy Schneider, one of Marvin’s four daughters and the editor of this newspaper, says the family has spent decades trying to put together the puzzle.

A year after his death on Dec. 10, 2013, they are still sorting through the fragments of his complex personality. Wendy loved and admired him deeply, yet also experienced his anger.

One of the best theories, she says, is that he was a hybrid, sharing opposing characteristics drawn from members of his parents’ families, the Levys and the Goldblatts.

Marvin’s mother, Dolly, believed his personality came from her father, Morris Levy, a man with a bold personality and a big family—11 children in all.

Among Morris’s business ventures was a restaurant. One night, while his wife was in the kitchen cooking and he was working the dining room, he asked a customer how he had enjoyed his meal. Not much, he answered.

Outraged, Morris kicked the customer out of his restaurant and told him, “Don’t you ever come back!”

Dolly traced a straight line between that kind of behaviour and what she saw in her own beloved son, Marvin, whose arrival as the first-born in a prominent Hamilton family had been celebrated like the birth of a prince and who grew up with an imperious manner to match.

As he grew into a young man, she sent him to see a psychologist—unusual for the time—because she was concerned he had too few friends and too much of a temper. The psychologist said he was excitable, high strung. His mother wondered why he couldn’t just be calm, why he always seemed to be testing boundaries.

At the same time, he was responsible and helpful to everyone, especially to his mother, helping to make up for his father Frank’s frequent absences due to his work at the family company, International Iron and Metal Ltd.—later Intermetco.

“He had the Goldblatt generosity—incredible generosity that he had inherited from his father and his grandfather,” Wendy says. “He’d been raised with it, as had his brother Abby and his sister Sorie.

For those contemporaries, colleagues and family members who endured Marvin’s F-bombs and confrontations, the reward was deep loyalty.

Those who knew him from the YMCA, where he was a noon-hour fixture in the Y’s Club, were used to his salty locker-room replies to queries about his well-being: “What are you? A f---ing police detective?”

They did not see that after his public show, he would return to his office at Intermetco, which his grandfather Jacob and father Frank had built into a powerhouse, and eat a simple lunch alone at his desk as he tackled the day’s business, which he pursued with determination and talent.

Nor did they necessarily see him take his seat in the synagogue and listen respectfully to the rabbi.

Marvin’s in-born toughness would help him build the family enterprise, even in the tough scrap-metal business, where cheaters, liars and thieves often thrived, but where he maintained a reputation for fair dealing, if not for genteel negotiation. Under his leadership, the company grew in scope and size, reaching 700 employees and branching into food distribution, refrigeration and real estate.

“He was real. There was nothing phony about him,” remembers son-in-law Lorry Schneider. “He was like a big fish in a medium-sized pond.”

After 100 years in business, Intermetco was purchased by Philip Services Inc. in 1997.

Marvin Goldblatt found love on a Florida vacation. He was lounging beside the hotel pool, recovering from appendicitis, when he spotted an especially attractive woman.

Lillian was married at the time and had a young daughter back home, and though it would be some time before they could be together, they fell in love immediately, and were married in 1951.

Later, they built a cottage on Lake Simcoe, near Barrie, and spent many weekends and holidays there with their growing family.

As their daughters grew and started their own families, they built cottages for them, too, and Marvin liked to tour his domain at least twice a day.

There, far from the working world and its demands for personal toughness, he was most relaxed, but still bombastic. When Wendy and her husband Lorry would bring new friends over to meet him at cocktail hour, he’d start by asking them, “Who the f--- are you?” No matter how startled they may have been, they’d always come out after drinks laughing, feeling like they had been part of some kind of show, Wendy says.

“We take pride in the fact that we had such a colorful father. He loved the shock factor. He loved to stand out.”

Howard Sherman, who started at Intermetco by working summers in the scrap yard and went on to become an executive at the company, calls Goldblatt the original “shock jock.”

He remembers Marvin Goldblatt as fiercely intelligent and deeply devoted to his family and his community, at his core a shy man who used his bluster both to protect himself and to test the calibre of those who sought his trust.

“He was a very, very complex person,” Sherman remembers. “If he knew there was a right thing to do, he would find a way to do it. He also tested your mettle. He wanted to see how people would react in hard situations.”

Those who won his loyalty would know the strength of his devotion. Sherman says Goldblatt was a loyal boss who made sure his employees had what they needed to live and to do well at work.

He himself remembers being a young man in a board meeting at another office, decorated in the style of the time, with mirrored walls. Already nervous in a room of more senior executives, Sherman pulled out his chair and it banged hard against the glass. Everyone turned to look at him, but the first voice he heard was Goldblatt’s, yelling at the hosts.

“Why is this room so narrow? What are you guys? Poor?” What he was really doing, Sherman says, was giving him cover so he could regain his composure and perform well in the meeting.

Ultimately, Sherman says, his old boss should be measured by the lessons of his actions, which provided the best form of mentorship.

“In his way, he taught a lot of people how to give money,” he says. “You learned from him that that was the proper thing to do. His family should be very proud of him.”

The fuse that had burned so brightly through most of the long life of Marvin Goldblatt dimmed considerably when Lillian died in 1994, says Max Mintz, who describes Marvin as his best friend, even today.

Mintz said Marvin never recovered from Lillian’s death. He kept the clothes in her closet arranged in exactly the same way for as long as he lived in the house.

“He died with her,” Mintz says.

Six decades earlier, the two men had met at Mintz’s Chicken Roost restaurant, a beloved gathering spot during the golden era of downtown Hamilton. Their friendship would take in meals, tennis matches—both of them cheating—vacations, and community activities.

Mintz said Marvin was as generous as his father Frank had been, but didn’t like to make it obvious.

“He helped more people out than anyone will ever know,” Mintz says. “He would help everybody, no matter who they were. No one knew. He gave away so much.”

When dementia began to chip away at Marvin’s formidable intellect, he resisted longer than most, and kept up the life he loved in the family home at the foot of the escarpment near James Street.

In 2009, he moved permanently to the cottage. By the time the family sold the family home on St. James Place, it had become a period piece on the inside. The man who bought it said the interior looked like something out of the show Mad Men.

Up at Lake Simcoe, the decline continued privately, marked by flashes of the old Marvin Goldblatt, who would see his grandchildren and great-grandchildren running through his yard and shout, “Get off my property!”

Near the end, Wendy remembers driving Mintz up to the cottage to see her father. Mintz cooked his old pal’s favourite, chicken livers.

At first, Goldblatt was brittle and distant, but Mintz persisted with the songs, stories and cooking. Soon, Marvin relaxed and the two best friends, who understood one another so well, were bantering again, like they had for 60 years.

“He was a special person. Once in a lifetime you get to know someone like that,” Mintz says. “I miss him every hour.”