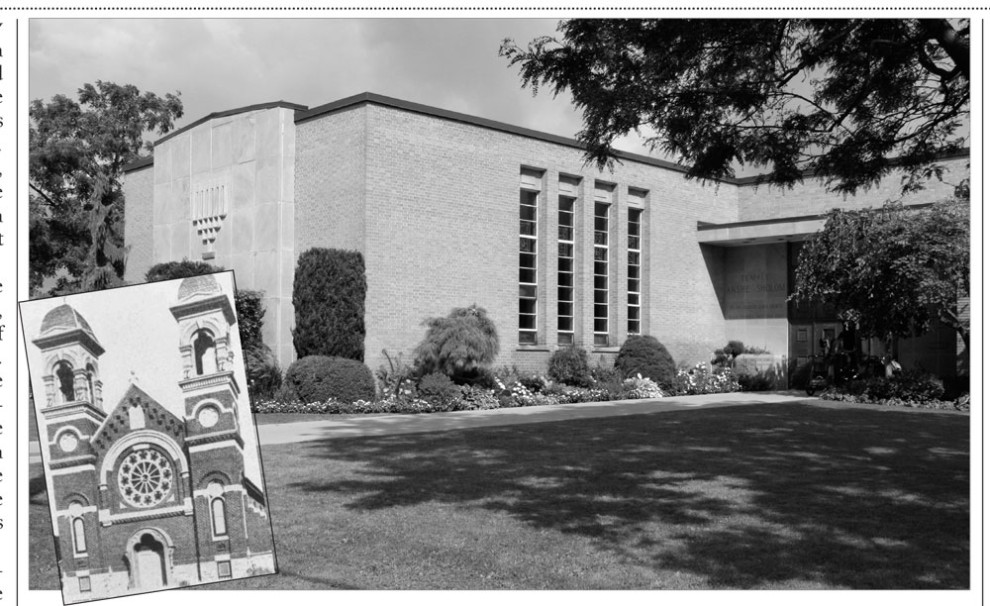 More than half a century ago, the Hamilton Daily News published a profile of Temple Anshe Sholom, declaring its “growth and development … seems to be a story of quiet, steady progress, unmarred by the setbacks, troubles and dissension which have been noted in the past life of many churches.”

A recent expedition into the Temple’s scattered archives, however, shows no lack of setbacks, trouble and dissension. Despite it all, however, Anshe Sholom celebrates its 165th anniversary this year and if any of the founding members were to return today they’d see that while some of the troubles have changed, the dedication of the Temple’s leaders to ensure its future hasn’t.

Canada’s oldest Reform congregation had its start over a store on James Street South in 1850 when the city’s 16 Jewish families decided they needed some form of communal life.

In 1882 they built Hamilton’s first synagogue at 143 Hughson St. S. and a hired a rabbi. That building served the congregation for almost 70 years until its newly hired rabbi — a young man from a congregation in Louisiana named Bernard Baskin — bluntly told the members during High Holy Days services in 1949, “Our present physical structure is shamefully antiquated and woefully inadequate for the needs of a progressive, growing and vital congregation.”

A committee was formed, money raised, and in 1952 a new shul rose on vacant land at the corner of King Street West and what was then called Cline Crescent. That building was enlarged in 1963 with the addition of a new wing housing a school section, an expanded auditorium and other services.

That’s the physical history of Anshe Sholom. More important than the bricks and mortar story, however, is the work of community building done by a long list of dedicated leaders.

Leaders like Edmund Scheuer and his sister Camilla Levy.

Scheuer came to Hamilton in 1871 to join his brother-in-law Herman Levy’s jewelry business. The Jewish community he joined consisted of 30 families of 131 people and young Scheuer quickly became a leader of the congregation, organizing the Hamilton Sabbath School. That was crucial, he declared because “If Judaism were to take footing in this new country … Jewish children must be taught Hebrew, the history of their people and the tenets of their faith …” In 1873, at age 26, Scheuer was elected president of the congregation and held that office for the rest of his 15 years in Hamilton.

Scheuer’s sister Camilla had come to Hamilton with her new husband in 1866. In 1870 or 1875 (the Temple records are unclear) she helped to form the Deborah Ladies Aid Society of Congregation Anshe Sholom — the first women’s group formed in Canada for the purpose “of uniting in a body for the purpose of assisting the poor, visiting the sick and dispensing general charity for those of Jewish persuasion.” Its great-granddaughter, today’s Deborah Sisterhood, remains part of the bedrock on which the entire Anshe Sholom structure rests.

Anshe Sholom’s religious leaders have included luminaries such as Emil Fackenheim, who went on to a distinguished career as a professor of philosophy at the University of Toronto, and Arthur Feldman, who was a scholar in his own right and a great personal friend of Sigmund Freud.

The name Bernard Baskin, however, towers above all others. From 1949 to 1989 he led the congregation through two building campaigns, periods of growth and decline and struggles to redefine the nature of Reform Judaism for a world unimagined by his predecessors.

During those tumultuous decades, Anshe Sholom and Reform Judaism struggled with questions of identity — what degree of kashrut would be observed, would men cover their heads during worship, what roles would the non-Jewish spouses of members be permitted to play in the life of the Temple and how to keep a younger generation interested in the faith of their parents.

One by one the questions were answered. In 1955, an application for membership from the non-Jewish husband of a Jewish woman was rejected although the couple’s three children were accepted into the religious school; in the same year a motion dictated “the products of the pig and shell fish may not be served in the synagogue” regardless of who is sponsoring an event. Also, meat and milk are not to be mixed. In 1957 it was decided that head covering would remain optional (although today it is encouraged for men and women).

Other problems were more difficult — such as the feeling Rabbi Baskin expressed in 1972 that 80 per cent of members “are not worshippers, but customers. They attend for specific functions or at times of special need. They utilize the resources of the synagogue as they would a hospital, just during those times when they require the institution – but ignore or shun it the rest of the time.”

Looming large across the Temple’s entire history is the question of money.

In 1905, for example, a special meeting of the ways and means committee was held “to devise ways and means of meeting the present financial situation in connection with the Anshe Sholom congregation.” At that time, the Temple had 42 members who paid a total of $948 in dues to cover annual Temple expenses of $1,200. A year later, a plea went out from the board for members to increase their dues payments by 50 cents a month to keep the congregation solvent to the end of its fiscal year.

The same song was played in 1938 when a campaign to expand the Hughson Street building sputtered because, according to fundraising committee chairman Leo Barnett, “certain members from whom large contributions had been anticipated had held up the drive …”

Three decades later, at the end of the 1960s, Rabbi Baskin noted in his annual report “Unfortunately our concern for financial solvency has often been an overriding consideration. … Perhaps when our financial obligation becomes less onerous we will be able to devote more of our efforts and resources to a strengthening of our spiritual activities and to a more diversified and imaginative cultural program.”

Many ideas have been tried over the years. In 1970 the congregation debated holding a lottery to raise money — many argued it was against Jewish tradition even though Rabbi Baskin held there was nothing in Jewish law specifically prohibiting it. In the end the draw was held in 1975 and raised $12,000.

Another controversial fundraising effort was a special appeal on Erev Yom Kippur. Some members felt such an appeal improperly tapped into the emotional content of the day. Rabbi Baskin said he wasn’t personally in favour of such an approach but “perhaps the means justify the ends.”

Sponsoring bingo games was a rich vein of money for a time — it once raised $40,000, but required as many as eight volunteers at a time to run. That vein played out earlier this decade as bingo players were drawn away to other forms of gambling.

The Baskin era at Anshe Sholom ended in 1989 when 32-year-old Rabbi Irwin Zeplowitz took over the pulpit. To him fell the job of defining Anshe Sholom’s position on thorny issues such as performing Jewish rituals for the children of same sex couples. In 1995 he performed a brit bat for the daughter of a lesbian couple, ruling “The fact they are a lesbian couple is a non-issue for me. The issue for me is this little girl and the fact we should be welcoming her into the covenant.”

In 2002 the issue was performing same-sex commitment ceremonies. Rabbi Zeplowitz said he had already decided he would do it, but agreed to delay any action until the issue had been debated by the ritual committee, the board and the broader membership.

For current rabbi, Jordan Cohen, in his ninth year with the congregation, the issues remain the same. “As a vibrant Reform Jewish community, we struggle to address the current concerns of our day, allowing the teachings of our Jewish tradition to inspire and guide us in all of our engagements with the world. The struggles have always been there and, I suspect, always will. Thankfully, so will the teachings of our tradition. That is what we celebrate.”

Anshe Sholom’s history certainly hasn’t been free from setbacks, trouble and dissension, but it has been vibrant.  Canada’s oldest Reform congregation has struggled for 165 years with challenges old and new. Its responses to old challenges, and interpretation of old laws to answer new challenges, are a mirror of the ongoing struggle of Reform Judaism itself.

The only certainty is that the struggle will continue.