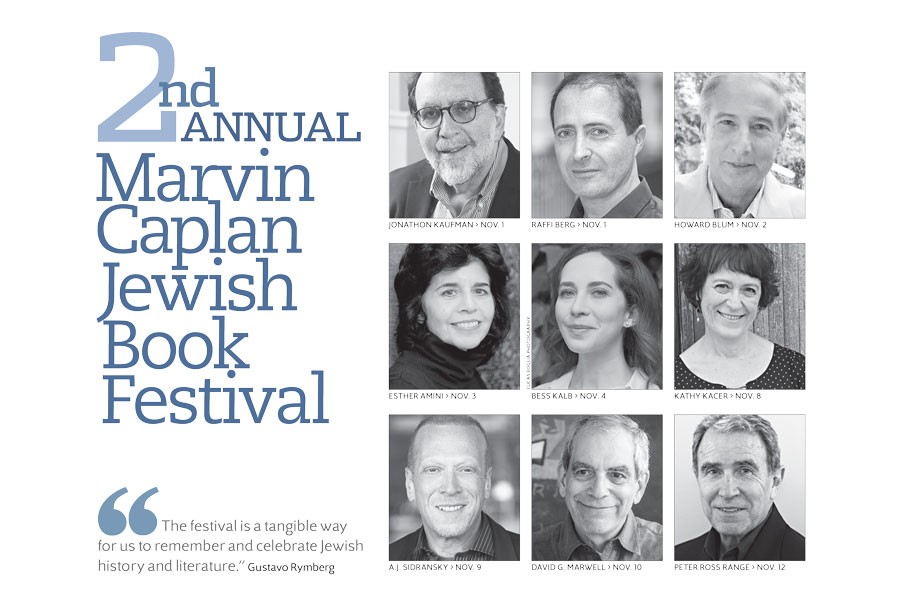 The Marvin Caplan Jewish Book Festival has been expanded this year, featuring nine authors presenting over eight days. This compares to the  four authors who presented last year.

The second annual event is taking place from Sunday, Nov.  3 through Thursday, Nov. 12.  The major change, of course, is that the author sessions will be presented live on Zoom because of the pandemic.

A committee selected the nine featured books from among hundreds of titles featured in the the Jewish Book Councils’s 2019-2020 catalogue. The Marvin Caplan Jewish Book Festival was initiated in 2019 to commemorate the memory of the late Marvin Caplan, a former Hamilton city councillor, business operator and realtor.

Throughout his life, Caplan was an avid reader, who was involved in children’s reading programs and literacy campaigns aimed at helping both immigrants and those already in our community.  Building upon the inaugural year’s success, the festival committee, headed by Caplan’s wife Judi, started working several months ago to select this year’s authors. “Marvin read constantly on a wide variety of topics and always had a stack of books going at any given time, so the annual Jewish Book Festival is the perfect way to honour his memory,” said Judi Caplan.

Hamilton Jewish Federation CEO Gustavo Rymberg said that the timing of the book festival during Holocaust Education Week was intentional.

“With the increase in antisemitism spurred by pandemic shutdown stressors, we felt it was vital that we stay focused and united as a community,” he said. “The Book Festival is thus a tangible and communal way for us to remember and celebrate Jewish history and literature, and an important outreach for us to share our experiences with the broader non-Jewish community.”

Just as important, with nine authors, the book festival has something of interest for everyone.

Jonathan Kaufman, a Pulitzer Prize winning author, in the Last Kings of Shanghai: The Rival Jewish Dynasties That Helped Create Modern China, unfolds an epic, multigenerational story of the Sassoons and the Kadoories, who flourished in Shanghai and Hong Kong as 20th-century China surged into the modern era.

Raffi Berg  is a BBC journalist who recounts the true story of a diving centre on the Sudanese coast run by Mossad operatives who used it as a cover to smuggle thousands of Ethiopian Jews to Israel from behind enemy lines.

Dani Limor served 25 years in the Mossad, with activities including leading the secret operation that evacuated Ethiopian Jews from Sudan to Israel. Before joining the Mossad, he was an Israeli paratrooper officer and fought in four of Israel’s wars. He is a founder of the Nachshon School for Social Leadership and is mapping emerging Jewish communities around the world for the Ministry of the Diaspora.

When: Monday, Nov. 2 at 7 p.m.
Author: Howard Blum, The Night of the Assassins
Moderator: Jason Markusoff

Howard Blum is a New York Times bestselling author. In The Night of the Assassins, he unravels the untold and true story of the Nazi plot to kill Franklin D. Roosevelt, Winston Churchill and Joseph Stalin in 1943.

Esther Amini, the American-born daughter of Persian immigrant parents who fled Iran, grew up in Queens, N.Y.  In Concealed, she documents her struggle between being a dutiful daughter of tradition-bound parents and her desire for more self-determination.

When: Tuesday, Nov. 4 at 7 p.m.
Author: Bess Kalb, Nobody Will Ever Tell You This But Me
Moderator: Dahvi Waller

Bess Kalb is an Emmy-nominated writer for Jimmy Kimmel Live and the author of Nobody Will Ever Tell You This But Me. Her book, a tribute to her beloved grandmother, Bobby, tells the broader story of Jewish immigration from Russia in the early 20th century, the desire for upward mobility, and the struggle for Jews to gain acceptance in America.

Dahvi Waller is an Emmy Award winner for her writing on television shows Mrs. America, Mad Men and Desperate Housewives.

Kathy Kacer is the author of numerous stories about the Holocaust for young readers, including Shanghai Escape.  Inspired by a true story and set in Berlin in 1939, 12-year-old Lillian and her father are on the run from Nazi soldiers because they are Jewish and are in danger of being arrested and put in prison.

A.J. Sidransky, a National Jewish Book Award finalist for Debut Fiction in 2013, will present his book The Interpreter, which tells the story of 23-year-old American GI, Kurt Berlin, who is recruited to return to Europe to aid in the interrogation of captured Nazis.

David Marwell meticulously documents how an ambitious researcher could become a faithful servant to the Nazi genocide. As chief of investigative research at the Justice Department’s Office of Special Investigations in the 1980s, Marwell worked on the Mengele case, interviewing his victims, visiting the scenes of his crimes, and ultimately holding his bones in his hands.

Peter Ross Range tells the story of  the chilling and little-known story of Adolf Hitler’s eight-year march to the pinnacle of German politics. A world-traveled author and journalist, Ross Range has covered war, politics, history, and international affairs.