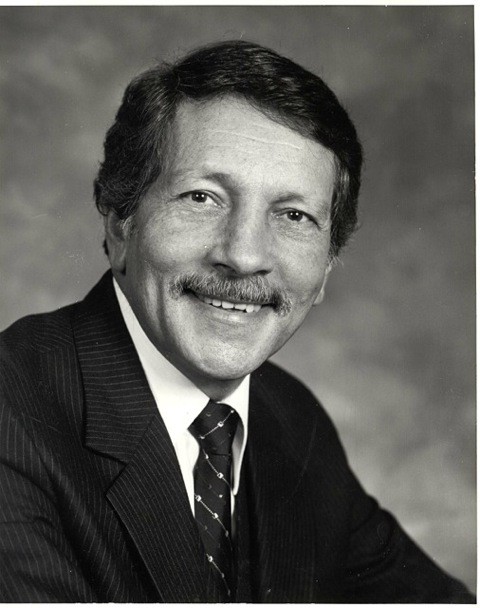 In a career that spanned 35 years, Sam Brownstone's impact on a generation of Jewish Hamiltonians can scarcely be measured.

For Brownstone, Jewish communal work was nothing less than a calling, and 50 years down the road, those who were on the receiving end of his attention and devotion, still speak with awe about a mentsch whose gentle and compassionate heart stands out as a model of how to live and give.

The star athlete was born in Winnipeg's notorious North End, at a time, his son recalls, "when there were not many Jewish boys accepted into mainstream sports."  Hamiltonians who came to know and love the gentle soul  that was Sam Brownstone, may have been surprised to learn that he played football with the Winnipeg Bluebombers in the late '40s. His true calling, however, was social work and, as fate would have it, Hamilton was destined to be the place where he would share his extraordinary gifts.

The love and respect evident in Harvey Brownstone's tribute to his father are echoed in the testimonies from those whose lives Brownstone touched. The HJN, itself a publication that Brownstone took a great interest in, is pleased to reprint those tributes here.

The following was adapted by Justice Harvey Brownstone's remarks at his father's funeral.

Brownstone's first job in Hamilton was as the Jewish Community Centre's youth director.  He organized the Jewish Social Services and was responsible for resettling Holocaust survivors. Brownstone was the first director of Camp Kadimah, which operated out of the JCC before moving to Dunmark Park. He also established a nursery school and  Talmud Torah at the JCC. Brownstone mentored many of the Jewish community's future leaders and was a supreme matchmaker. Many couples met at the JCC; in fact, that is where Brownstone  met his wife, Odette.  Brownstone ran youth groups, Sunday afternoon programs for children, Saturday night dances for young adults, intercity events, concerts, sports tournaments, arts programs, day programs for the elderly. He also opened the JCC to the general community, hosting such diverse groups as Parents Without Partners and St. John Ambulance. Together with his colleagues, Bill Stern and Max Rotman, Brownstone turned the JCC into a true community centre, which offered a multiplicity of services to everyone.

Following the death of Max Rotman,  Brownstone and the City of Hamilton founded the Max Rotman Humanitarian Youth Award, which continues to be presented annually to deserving youth. Brownstone became the JCC's executive director in the early 1970s.  Following his retirement in 1982,  Brownstone was honoured as a Negev Dinner honouree. Brownstone was often referred to as the "mayor" of Hamilton's Jewish community and was widely seen as "the glue that held the community together." Brownstone was diagnosed with Parkinson's disease in 1988. For 25 years, he managed his disability with perseverance and dignity, never complaining about his illness.

Brownstone was an exemplary husband and father,  a true family man and a true gentleman.  The world was a kinder, gentler place with him here.  He never had a bad word to say about anyone and was truly beloved by everyone who knew him.  He personified the word class.

The Three Amigos: Max Rotman, Bill Stern and Sam Brownstone . Sam Brownstone was a very good friend and never had a negative word to say about anyone.
William Morris

Sam  Brownstone exuded and generated such warmth and genuineness. To this day I recall his vibrant smile as we fed him the basketball, and he would take long shots from the gym entrance. Rarely missing! Sam was the perfect role model for those of us who experienced his love of people, community and sport. He built people's character through positive role modelling and acceptance of all who walked through the JCC doors.
Mitch Beube

Sam was a very caring and loving man. He always took an interest in the younger children. He was always there for us. He will be remembered for all the good things he did for everyone.

Sam Brownstone was one of those special people who could relate to any person of any age. He was loved because of his  thoughtful, supportive, and non judgemental manner and his zeal to create the best communal experience for all.
Larry Szpirglas

As a fellow Hamiltonian, I saw that Sam was the guy who made the JCC tick. His infectious enthusiasm was infused throughout the place.
Steve Paikin

By organizing the weekend  JCC socials, Sam arranged for those of us with two left feet and no sense of rhythm to learn how to dance.  At the socials, Sam assured that all kids got to know and respect one another, and those values remain with "Sam's Kids" today.
Larry Paikin

Almost from the time our family  arrived in Hamilton (1956), Sam was a warm, welcoming personality, who facilitated in making our transition to life in Hamilton easier. Sam had a gift for making you feel part of the community. He nurtured and assisted in  the development, and mentoring of leadership for the Jewish  community. Problems became opportunities for growth, and personal development. His gentle, assuring deameanour in service to our community,  always with a twinkle in his eye, and never uttering a negative word at trying times, towards anyone, will always resonate with those who knew him well.
Abe Szpirglas

When I was 14, we moved from Ancaster to Hamilton. My parents, wanting me to meet other Jewish teens, suggested that my brother and I go to the dances at the JCC.  Unfortunately, the girls were not very friendly and the boys only hung out with the popular girls. Sam, upon seeing me alone as a "wall-flower," rescued me by engaging me in conversation. I will all ways remember his kindness, his caring and his intuitiveness sensing that I was having a difficult time.
Elaine Dembe

I am one of the people who is forever grateful to Sam, He recognized my potential as a teenager, gave me a job at the centre --- "you are going to be good with kids and you need to leave home." He was a mentor  and a support, fortunately, some years ago we had a talk and I was able  to thank him ... I thank Sam for recognizing my potential and urging me to "go for it" He  was always someone I looked up to.

I remember the kindness of Sam. He was that special kind of person that could make you do the right thing. You felt that you were in the presence of someone you could trust.

Life was tough and the kids were tougher, making life difficult for the new kid who did not speak any English. I remember Sam sitting with me on the front steps of the Delaware JCC many times consoling, advising and encouraging me.
Moishe Chaimovitz

Sam Brownstone hired me as the JCC receptionist in 1977. I remember him as a kind and gentle man with a focused gaze that made you feel as if he was looking into your soul.  There was always someone coming into the buidling to see Sam, and he was always there to help anyone who came through the door.  Sam always took time to talk to people. He had the ability to really listen and make everyone feel welcome.
Christine Nusca