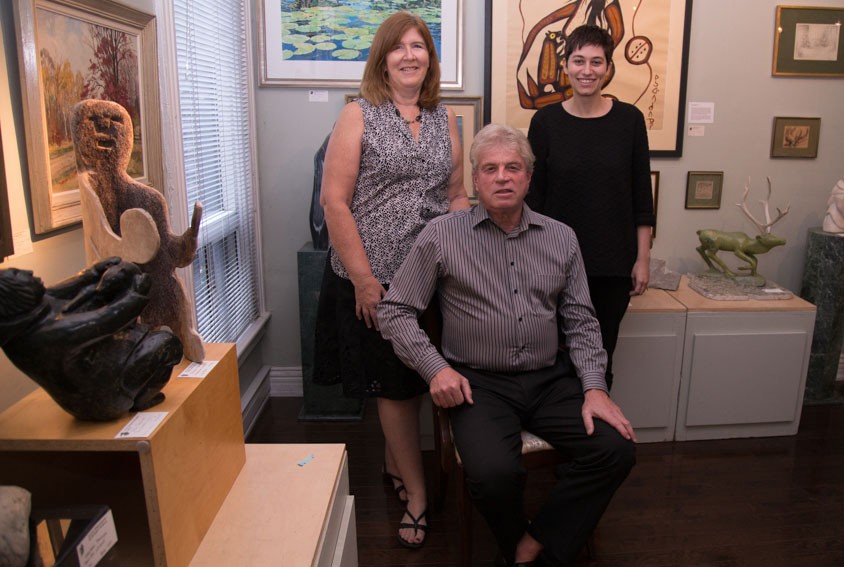 “It’s like she’s been here forever,” says Marvin Cohen about Melinda Richter, 33, a valued member of the team at Arctic Experience McNaught Gallery. Richter lives in and owns a store in Peterborough, while still working part-time for the folks who have been her mentors and biggest supporters. Theirs is an inspiring collaboration where everyone wins.

How did Melinda come to be associated with the Arctic Experience McNaught Gallery?
Janet McNaught: In 2012 Melinda was finishing her program in museum studies at Fleming College in Peterborough and was looking  for an internship. We knew that we needed to have some kind of fresh energy brought into the business and she fit in seamlessly. When Melinda graduated and was looking to do some kind of work in Hamilton as a base, we had her work with us part time.

How did your business evolve once bringing Melinda on board?
McNaught: At first we wanted to see if Melinda could help us build a business that was more relevant to  younger collectors, because that was the model that we had had for years. But it wasn’t working anymore because artists were now representing themselves.  At the same time we started to get more calls from people who said they were downsizing, and asking us what they should do with their art.  So we began to realize that we needed to look at doing more collection management, consulting and appraising. Increasingly, our clients’ greatest need isn’t to add more artwork to what they own — it’s to know what they need to do with the stuff they have.

What skills does Melinda bring to the table?
McNaught: We told Melinda that we didn’t have a vested interest in doing anything in a particular way, that if she saw something that she thought could be done better, we’d talk about it and change it.  We’re having her do all of our ad design now because she has a different eye. As well, Melinda really has strength in research and report preparation. She’s very good at talking to people and  extracting their stories.

How does it work with Melinda living in Peterborough and working for you part-time?
Cohen: When Melinda told us that she wanted to move to Peterborough, we had to rethink our long-term plans and figure out how she could still be a good fit with us while developing and growing in her own direction. We’ve adapted by making appraisal appointments for days that Melinda is here, and in the interim she does the research and prepares the reports. When she brings them in we review it and make the revisions. So she doesn’t have to be here to do a lot of that work and this arrangement fits into her schedule and with her business.

It sounds like Melinda is living her dream, in that she's doing exactly what she was trained to do.
Richter:  I’m really enjoying my shop in Peterborough where  I do appraisals and sell art, antiques and vintage pieces. At the same time, I appreciate that I can still work part time in Hamilton for the people who gave me my start in the business. Janet and Marvin have given me a lot of advice. They’ve helped me out with the difficult appraisals and given me inventory once in a while, so it’s really nice that there’s been a reciprocal relationship.

What advice do you have for other small businesses interested in accommodating young entrepreneurs?
McNaught: Because we needed Melinda for her skill and expertise, we knew that we had to make the job relevant for her to continue to be interested in working here. Giving Melinda the freedom to develop and explore. combined with our years of experience has really contributed to the success of our business. It’s been a mentoring relationship but we will go to Melinda for advice on lots of things as well, especially about effective communication. At this point, Melinda is irreplaceable in our business. We could never hope to hire someone else with her unique skill set and contribution.