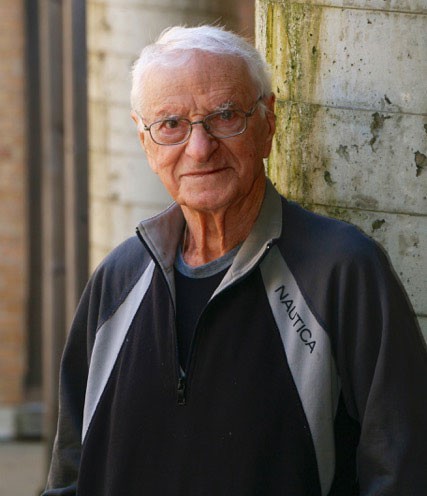 When Paul Hanover reflects on his storied career as a radio and television personality, he modestly attributes his success to being in the right place at the right time. But even into his 90s, it’s readily apparent that Hanover’s love of people, essential humanity and wry sense of humour are the real reasons why he’s a Hamilton treasure and One Of A Kind.

When did it become apparent that a career in show business might be in the cards for you?
I was the class clown at Westdale high school, which is something I did to get some attention. I remember it was wartime and we had a skit we made up, a Julius Caesar play, as a fundraiser. Even though there was a script, I decided I would do something on my own. I didn’t have a toga so I wore my sister’s confirmation dress. I remember that I walked out, stopped, looked out at the audience and went straight into a monologue, and they received it very well. So that gave me the whole inspiration to get into radio, because radio was the only outlet for that sort of stuff.

How did you get into radio?
I got hired because of wartime. I was lucky. Any other time I might not have been able to climb the ladder.  When I was 17, I was hired by a radio station in Sault Ste Marie. Then I got lucky when Norm Marshall, the star performer at CHML, and an alcoholic, disappeared and they didn’t know where he was, so I got hired. In those days, working on radio was essentially announcing music and the news, but with television coming along at the same time, we gradually got into personality radio. The station developed that way and I grew with it. I had a chance to find the real me by meeting people, talking and kibbitzing around. The whole industry, the whole world was changing and I happened to be in the right place at the right time.

How did you come to change your name?
In show business, Hollywood stars would generally not keep their original names. Solly Yanover was all tough to say, so when I was up in Sault Ste. Marie, I tried calling myself Sy Young at first. (Then I came up with) Paul Hanover. And that just fit in beautifully. There’s a woman here at Shalom Village who went to school with me in Westdale. She said to me one day, “I remember you as that curly haired Solly Yanover.” I didn’t know anybody noticed me in school.

At the height of your career you became known as Mayor of the Morning. How did that come about?
It was my boss’s idea, who got the idea from a disc jockey in Chicago. It really opened up a whole new field for me, because my being in Hamilton was an advantage. I knew the people. I’d be out talking to them and then go on the next day and talk about them.That made a whole family of listeners. One of my best jokes involved (former mayor) Vic Copps. A big issue at the time was McMaster University’s taking over a lot of homes in Westdale for its expansion. It caused a lot of brouhaha that led to one of my great coups. I was out doing a banquet and I said  that Vic was the night ma(re)-yor. After that, every mayor since then became the night mayor.

How did you get into television?
It was a lucky break. I was the Mayor of the Morning in Hamilton, when one of the salesmen I knew from Sault Ste. Marie was down in Montreal to help open a CTV station there.  At the same time (American game show producer) Dan Enright was pitching a game show to the network, but they couldn’t get a host. This guy remembered the days when I hosted a show on CHCH called Mother Parker’s Musical Mysteries and recommended me. I went up and auditioned and (subsequently) had a whole new career as a game show host for about 10 years on CTV.

You’ve talked about your career highlights. Can you also speak about the hard times.
You know it’s funny. Success can bring tough times. There was a time when I had a television show, I had the radio show, and I started working as an announcer at Woodbine Raceway. Here I was working seven mornings and seven nights a week and calling the races and on weekends, and flying to Montreal to do TV shows. That was pretty stressful, but in that business, you were afraid to let anything go. The work might only last a week or a month so you took on everything. I had everything going for me, and yet, that was my most depressing time. But I got over it. what helped me a lot was being able to do comedy. And most of the comedy stuff I did was telling the truth about people.

What words do you live by?
I used to tell kids at school when you’re in school, get involved with as many things as you can because someday there’s going to be somebody who can do something for you ...  So you have to do the best job you can wherever you are and things will come your way eventually.

What do you see as your legacy?
Staying in Hamilton. Being with family and friends. When CHML started the concept of the radio personality I took hold of that and ran it as hard as you possibly could ... It was hard work and everything, but I’ve got millions of friends. Thousands of people whose lives I’ve affected and that made me feel really great, to have done something and felt it and pioneered something that worked out well for the station, for CHML, for Ken Soble. Not bad for a kid who put on his sister’s dress and went on a stage in Westdale and got his first taste of an audience reaction.