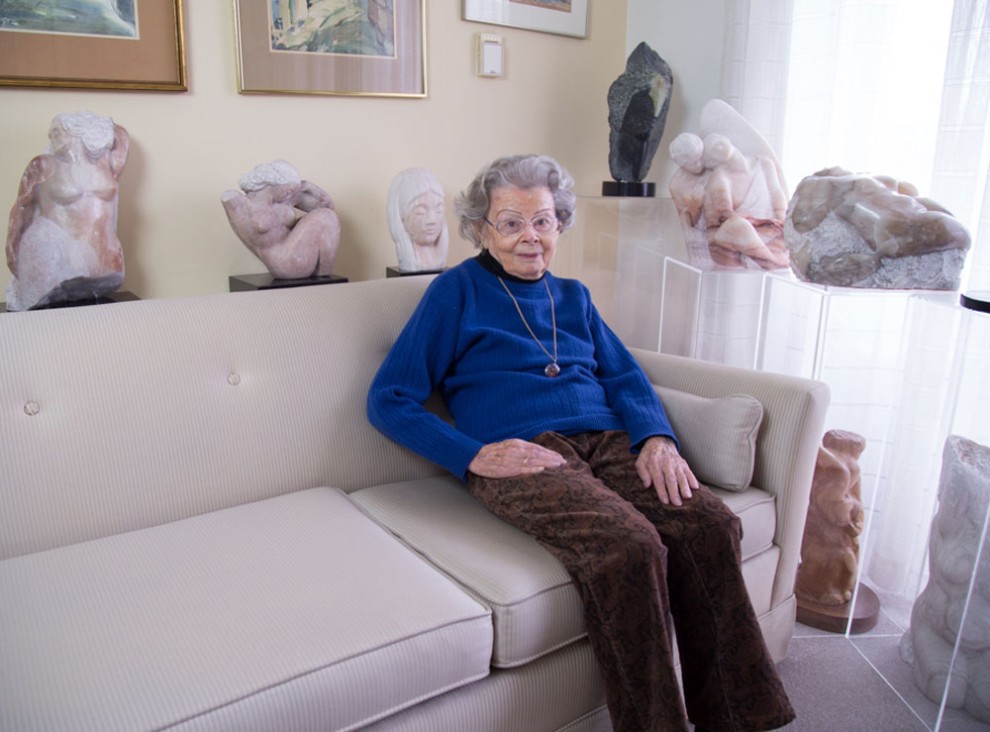 The beautiful stone carvings on display in Ora Markstein’s Shalom Village apartment could just as easily grace the rooms of the world’s most prestigious galleries. The work of her own hand, Markstein’s pieces represent the universal human experiences of pain, loss, love and spiritual renewal. Strong-willed, tenacious and an inspiration to all who know her, Ora Markstein is indeed one of a kind.

Darkness and light have always coexisted in Ora Markstein’s life. As children, she and her sister lived seemingly charmed lives in the warm embrace of a close-knit family in a small city near Budapest. But Ora’s carefree adolescence was shattered at the age of 15 with the Hungarian government’s alliance with Nazi Germany.

“I always say that until the Holocaust, I was just dreaming and I woke up in Auschwitz,” she said.

Somehow, and against all odds, Ora and every member of her immediate family survived the war, as did the young man who captured her heart just four months before he was sent into forced labour. Francis Markstein was near death when Ora’s mother nursed him back to health after the war. The two were married just days after Ora’s own miraculous return from Bergen Belsen, at a wedding in which “there were hardly 10 Jewish men for a minyan.”

Ora found life in Hungary after the war unbearable, but with the birth of the State of Israel still two years away, there were few options. In the immediate post-war years emigration opportunities for displaced Jews were extremely limited, and, in one of history’s great ironies, Germany became a major destination for Jewish refugees fleeing violent post-war anti-Semitism in Eastern Europe. The Marksteins would end up in a UN sponsored refugee camp in Germany, where they would stay for a year. Ora’s son, Igor, was born in a German hospital. The year in the camp was destined to be providential, for it was there that the Marksteins befriended a 16-year-old orphan by the name of John Hirsch. Some 30 years later, Hirsch, then a well known theatre director at Stratford, would be instrumental in kickstarting Ora’s art career.

In 1949 Ora and Francis finally reached Israel, but there too, life was filled with challenges. Israel faced a deep economic crisis in the early years of statehood. As well as having to recover from the devastating effects of the 1948 Arab-Israeli War, it also had to absorb hundreds of thousands of Jewish refugees from Europe and the Arab world. The Marksteins found it very difficult to eke out a viable living, and spent their first years in the country moving from place to place. It was during this period that Ora began dabbling in clay and casting in plaster under the tutelage of a fellow Hungarian refugee and well known sculptor. Eventually, the Marksteins moved to Holon where Igor, who was by then demonstrating considerable musical talent, would be able to study with a master teacher.

The Marksteins stayed in Israel for 26 years until their son’s move to Illinois prompted them to try and make a go of it in Canada. In 1975, they moved to Montreal, where Ora’s chance encounter with well known Polish Canadian sculptor Ethel Rosenfield would mark a turning point in her life. Ora met Rosenfield at a dinner party, and after showing her photographs of plaster casts she had made in Israel, Rosenfield exclaimed. “But you are thinking in stone! You feel in stone!”  When Ora replied that she had never even put her hands on stone, nor could she ever afford to work in that medium, Rosenfield reassured her. “I’m going to help you,” she said, and, true to her word, arranged for Ora to receive a scholarship at the Saidye Bronfman Centre.

“Make something,” her instructor said at Ora’s first class, as he handed her a used piece of soapstone and a couple of blunt carving tools. When he returned after an hour, he looked at what she had done and said, “You don’t need me, just work.”

“I’m still crying when I think of it,” said Ora,  “because I felt so elevated. I felt so happy.”

It was a job offer at Beth Jacob Synagogue’s Hebrew school that brought the Marksteins to Hamilton within a year of their arrival in Canada. When their old friend John Hirsch heard they would be moving to Hamilton, he said, “Now, you will be alright. I have my best friends in Hamilton.”

Larry and Sharon Enkin would welcome the Marksteins into their lives like long-lost family. The latter would become Ora’s greatest champion, arranging for a show at the Delaware Avenue JCC, that would set her career in motion. Over the next 30 years, Ora worked prolifically, her sculptures sought out by collectors and galleries alike. In 2008, at the age of 83, the Art Gallery of Hamilton organized a one-woman exhibit featuring Ora’s stone carvings. The transcendent quality of her sculptures was beautifully captured by curator Sarah Knelman at the time when she wrote,

“Carved by hand from blocks of soapstone, marble and alabaster in every imaginable colour, Markstein lets the shape of the sculpture slowly reveal itself, transforming unwieldy slabs of stone into images of beauty. Her legacy silently restores faith in humanity after her painful experiences during the Holocaust in Hungary, and defies Theodor Adorno’s famous idea that ‘it is impossible to write poetry after Auschwitz.’”

At 83, Ora had reached the pinnacle of her career, but her sense of accomplishment was tempered by the fact that her beloved Francis had not lived to see it.

A poet, writer and accomplished linguist who translated poetry from 45 languages into English, Francis died in 1991.

“Without him I would never have gotten anywhere,” she said. “He supported me, encouraged me. He helped me in every possible way because he believed in my talent.”

In the eight years that have passed since the Art Gallery of Hamilton show, health challenges made it necessary for Ora to move to Shalom Village. The transition has been difficult, but the fact that she was able to bring along her most precious possessions “makes it possible for me to stay here.”

As one’s breath is literally taken away by the way Ora’s pieces are illuminated by the late afternoon sun the thought arises, “These are not inanimate objects.” Indeed, Ora has heard it again and again. “It’s almost as if they’re alive.”

What does it mean to her to live out the final days of her life surrounded by her work, each piece the result of months and months of physical and emotional labour?

“I made something that made it possible for me to live after the Holocaust,” she replies. “To try to get rid of all the horrible ugly days that I have seen ... It’s always there of course but these have been a balance in my life. With all the terrible memories, they have made my life beautiful.”