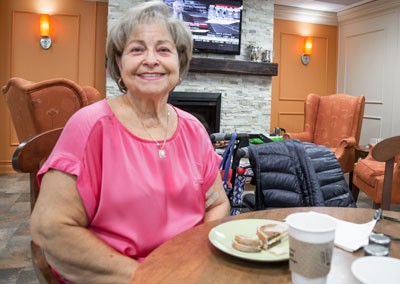 Ilana Pekar looks vibrant and in good health at a lunch date at Bubbie Bessie’s in Shalom Village.

The truth is, at 61 years of age, Pekar is a walking miracle. Diagnosed with genetic kidney disease in her 30s, Pekar has been on dialysis for 21 years.

“Most people don’t last more than five or seven years. I don’t know how to explain it except to say I’m not ready to throw in the towel.”

Pekar’s name may sound familiar. Her son Arie underwent a successful kidney transplant last year, after a well-publicized search that culminated with his friend Darren Kudlats giving him the gift of life. While Pekar’s own situation was highlighted on their Facebook page, Mom and Me Need a Kidney, it is only now that she feels ready to truly focus on her own need.

“I’m running out of time,” she said. “A transplant is really the only option I have left because I don’t know how much longer I’ll be able to dialyze.”

The fact is, Pekar did undergo two kidney transplants when she was first diagnosed in the 1990s, but both failed. Last September after an 18-year wait she came very close to having a third shot at it, but the kidney belonging to the young man on life support in a Kingston hospital was no longer viable by the time she was wheeled into surgery.

“It was devastating,” said Pekar. “I think I went through a week of grieving ...  But then you’re back in the saddle, right?”

That kind of positive attitude is, one senses, what’s really behind Pekar’s bucking the odds. Having to endure two decades of six-day-a-week dialysis treatments, coupled with  an inability to travel (Pekar has only gone on two vacations in the last 18 years) could easily make a person succumb to bitterness and despair. But Pekar’s vibrancy, her refusal to give up on herself, defy such generalizations.

“Every day is precious,” she said. “I can lie in bed with my aches and pains or I can go out and try to be distracted and enjoy my life. It’s very unfortunate that most people wait until they’re faced with a dilemma before they realize how every day is valuable. Remember the book that said, ‘don’t wait to use the good dishes?’ I bring out the good dishes. I use them every day.”

Pekar has no illusions that a transplant will cure her kidney disease, but she figures that, whatever the risks, it would still be a better way of dealing with it than continuing to be on dialysis.

“I’ve been waiting a really long time. But (a transplant) is really the only option I have left because I don’t know how much longer I’ll be able to dialyze.”

In the meantime Pekar is working out regularly at Shalom Village and says she has never felt in better condition. And she’s enjoying her life.

Those interested in learning more about Ilana and how they can help can visit the Pekar family’s Facebook page at www.facebook.com/MomAndMeNeedAKidney.