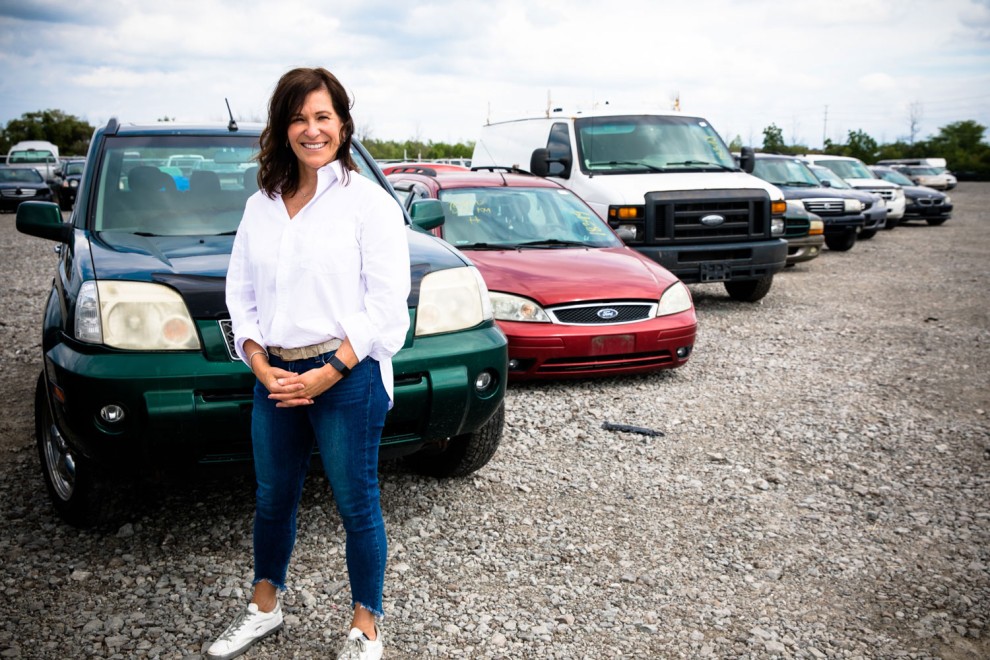 When Georgina Rosenberg’s father passed away 10 years ago, she felt overwhelmed by grief and the myriad of tasks to attend to. The question of what to do with her father’s car was a decision made on the spur of the moment when she drove it to a mechanic and handed over the keys.

Rosenberg would recall that period of her life years later when she, together with her partner, Benjy Katz, created Homeless Cars, a charitable foundation that helps people turn their old car into a meaningful donation that helps charities eliminate homelessness in Ontario.

Their timing would turn out to be prescient. Homelessness was already a serious problem when Rosenberg applied for charitable status back in the summer of 2019,  a process that took effect only after COVID began its deadly sweep through thre region.

“We chose homelessness because there is a serious social issue in Southern Ontario and not one that people like to embrace and talk about. With the onset of Covid19, there has been a surge in cases amongst the homeless, as well as  an anticipated increase in the numbers of homeless people and food insecurity as a negative result of this pandemic. I think it’s a timely start to our foundation,”  said Rosenberg.

“We want more than that. It’s just a matter of marketing and getting the word out there.”

On a single day during their second week of operation, Rosenberg took in 10 cars.

“I get extreme satisfaction in helping the donors,” said Rosenberg. “Often donors perceive having an old unwanted vehicle as a problem. Not only are we able to take that off their hands in a quick and efficient manner, they get the opportunity of giving charity to their community without giving money. People are so grateful for our help,” like the woman whom Rosenberg assured, yes, Homeless Cars could indeed pick up her car that died in a Canadian Tire parking lot. Then there was the gentleman in Barrie, who was so happy to work with Homeless Cars that he offered to tow the car to Hamilton himself to save them from the expense.

Homeless Car’s user-friendly website could be a factor in why the charity’s been so successful at breaking into the competitive world of car donations.  Once a donor visits homelesscars.ca, it takes literally seconds to call a number, send an email or  fill out a form, after which their vehicle — contactless and free of charge — will be picked up within 48 hours. After their vehicles are evaluated for their value, donors will receive a tax receipt.

Homeless Cars has appointed a board of directors which will meet regularly to oversee the distribution of funds among four charities, including Toronto-based organizations Ve’ahavta, Seeds of Hope, and Hamilton’s Out of the Cold program, and Barton Street’s 541 Eatery and Exchange.

Cindy Richter, coordinator of Hamilton’s Tuesday night Out of the Cold program, said that Homeless Car’s commitment stands to make a significant impact on the charity.

“Georgina’s visionary launch of Homeless Cars has come at a crucial time,” said Richter. “Over many months of isolation, we have been shielded from seeing the increase of suffering and injustice, and we are thrilled to have a steady source of income to fund our effort. By bringing the problem of homelessness to the forefront, Homeless Cars is inspiring people to see their car donations build a holier world.”

Rosenberg, a native of Toronto, who has many years of sales experience in the credit card processing industry, finds her new endeavour more fulfilling than any professional position she’s held in the past.

“I’m very fortunate to be in a position where I can give back to the Hamilton community, which has been very good to me,” adding that she still gets excited by every car that Homeless Cars brings in.

“It is tremendously rewarding to know that my efforts are now going back into the community and there truly is no feeling like the one of giving.”