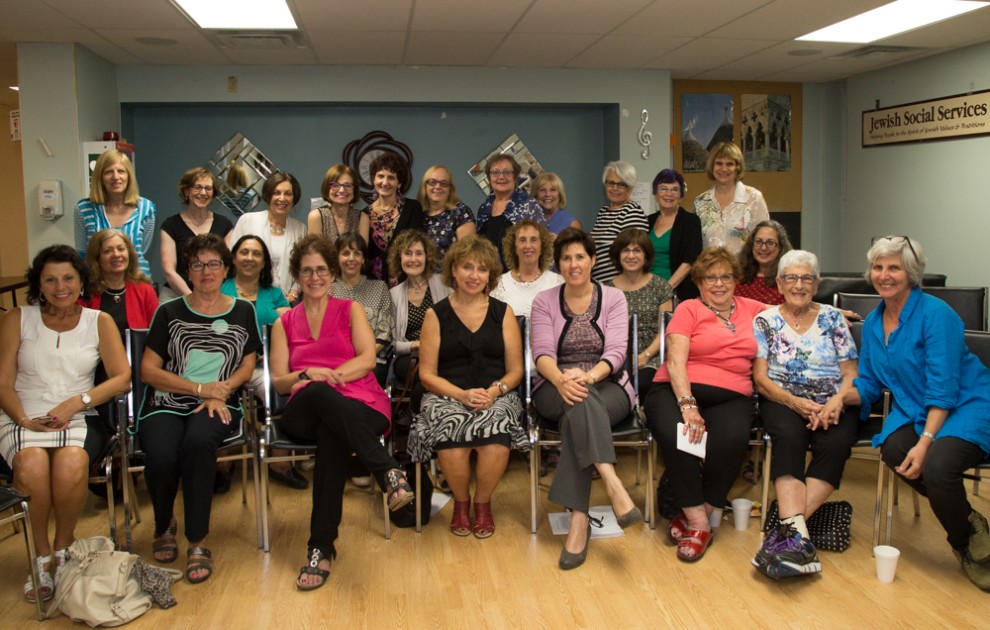 When so many other Jewish women’s groups have gone by the wayside, why does Na’amat Hamilton continue to thrive and grow? The answer, according to its members, can be found in the group’s extraordinary commitment to each other, to their community and to the women and children of Israel. That’s why we think that Na’amat Hamilton represents the best of Jewish Hamilton.

First a disclaimer. The writer of this piece is a longtime Na’amat member who feels the heavy weight of responsibility of getting the story right. The following is her best effort.

Na’amat Hamilton’s official history begins in the early 1980s but its roots go back five decades earlier to the day an emissary from pre-State Palestine by the name of Golda Meyerson came to town. Meyerson, who would one day become Israel’s Prime Minister Golda Meir, was on a North American speaking tour to promote the Zionist cause. An electrifying speaker, her Hamilton appearance would inspire a group of women to form a chapter of the Pioneer Women, an organization steeped in the values of socialism, feminism and labour Zionism. In the early 1980s, the group adopted the name of its Israeli counterpart—Na’amat, a Hebrew acronym which stands for “Movement of Working Women and Volunteers.”

Hamilton’s Nitsan chapter was founded in 1981 by a group of women who were asked to form a local chapter by a very persistent recruiter from Na’amat Canada. Among the founding members was Agi Meinhard, who, as a professor of  organizational behaviour at Ryerson University, brings both a personal and academic understanding of the chapter’s trajectory. “In the beginning, the group was made up mostly of women who were new to Hamilton, many of them ex-Montrealers,” said Meinhard. The women had in common “good Zionist backgrounds” who had spent a significant amount of time living in Israel and the fact that their children attended the Hamilton Hebrew Academy. Slowly, the group began to attract both other newcomers to the city and native Hamiltonians, the sense of commonality and shared values a major draw.

Early on in Nitsan’s history, the chapter was invited to set up a table at Na’amat Toronto’s annual bazaar as a way of meeting its fundraising obligations. The idea, according to Meinhard, had little appeal. “Very soon we decided that this wasn’t for us and and so we struck out on a new path,” she said. That path would turn out to be the Celebrity Author Luncheon, the group’s signature fundraiser, now in its 33rd year. Canadian luminaries Robertson Davies, Margaret Atwood, Mordecai Richler, Anne Michaels and Kim Thuy are among the many outstanding authors to have been featured at what has become one of Hamilton’s most anticipated literary events. Meinhard credits the author luncheon for giving the group its unique sense of identity. “There was this sense of absolute euphoria” she said about those first author luncheons held at the Hamilton YWCA, that saw every member of the still relatively small group serving up boxed lunches to attendees.

“After the author luncheon we realized that we’re really something different,” said Meinhard. “There was this group dynamism that created a fantastic sense of cohesion and unity ...  a sense of pure accomplishment that we could actually get authors and make money.” Thirty years later, the high that comes from people coming together with a unity of purpose remains undiminished. “The author luncheon epitomizes for me what I really love about Na’amat,” said Susan Joanis, one of the chapter’s newer members. “It gives me a lot of respect for the group the way that people come together and just roll up their sleeves and start working together in a very lovely camaraderie and in a very organic kind of a way ... it’s very special.”

Although best known for its author luncheons, Na’amat has undertaken other endeavours that reflect its membership’s desire to bring creative programming to Hamilton’s Jewish cultural scene. The 1990s, for instance, saw the group organize a day-long Jewish women’s conference, and its hosting of an art exhibit that showcased works by Israeli and Palestinian artists at an event that brought together members of Hamilton’s Jewish and Palestinian communities at a time when peace in the Middle East still seemed like a real possibility. More recently, the group has organized women’s seders, wellness days and its bi-annual Women of Inspiration event.

Investment in each other

At various times in its history, group dynamics have arisen in Na’amat that has had newer members complain of feeling excluded from a perceived “in” group. Whenever these issues come up, the group has addressed it head-on by organizing weekend retreats that have been remarkably successful at breaking down barriers. Meinhard remembers the soul-searching that took place among veteran members the first time the issue came up. “As part of the old guard, we had no idea that people were feeling this way,” she said. Talking it out had the immediate effect of dissipating tension and the group was stronger for it. Years later a new “old guard” faced a similar situation by organizing a retreat at a member’s cottage. For Susan Roth, who was president at the time, that weekend remains one of her favourite Na’amat memories. “It really helped the group to bond and we learned a lot about each other in that easy-going environment,” she said.

Just as its retreats have been critical in building cohesion and unity among Na’amat membership at large, so too has the national organization’s annual leadership seminar in Israel cultivated knowledge, passion and commitment among its leaders. All the Nitsan members who have participated in the seminar—and there are several—describe the week-long experience of visiting Na’amat daycare facilities, schools and women’s shelters as deepening their understanding of the critical role the organization plays in the fabric of Israel’s social services. Gilda Ennis said she was most impressed by the professionalism she witnessed at Na’amat daycare centres. “I’ve never in my life met a group of women who are so dedicated. I’ve never seen such commitment,” she said. Sandi Seigel waxed enthusiastic about everything she saw of the program. “There’s so much about what Na’amat does that resonates with me,” she said. “There’s nothing that can replace seeing things first-hand.”

There’s a running joke in the chapter that just showing up at your first meeting is enough to have yourself recruited to a committee. The joke has more than a grain of truth. At Jan Hastie’s first meeting, to which she came along with her husband who was the guest speaker that night, she got a job selling author luncheon tickets. Before too long she found herself in charge of everything ticket-related, that, despite its ordeal by fire quality, ultimately served her well. “I had to set up tickets on the computer and master a mail merge ... just because it had to be done,” she said. “I’ve learned a lot at Na’amat ...  having the bravery to convene an author’s luncheon and to take on the presidency at one point. All these things have been growth experiences.”

There for each other

Helen Metz joined Na’amat not long after immigrating here from South Africa in the 1980s. To this day, her most cherished memory  is the support she received after losing her brother and mother in 1994. “The Na’amat people were fantastic and I’ll never forget that,” she said. Anna Shkolnik had a similar experience with the sudden passing of her husband seven years ago. “I’ve never experienced anything like it,” she said, of the four Na’amat women who showed up at her door, wearing aprons and bringing a beautifully prepared Shabbat dinner. “To bring the food, supply it for the whole shiva period and come on Shabbat evening wanting to help us to go through this — all the support that I got from Na’amat members through this difficult time was just unbelievable.”

The common wisdom 20 years ago was that the best way to ensure Na’amat’s long-term sustainability in Hamilton was through setting up a second chapter made up of younger women. When attempts to do so ultimately failed,  some felt disheartened by the prospect of an aging membership that lacked the energy to take on leadership roles and initiate new endeavours. They needn’t have worried. Attendance at Na’amat monthly meetings has gotten so high of late that the group now meets at the Jewish Social Services office in Dundas rather than at individual homes. Members attribute this unexpected growth spurt to the recruitment efforts of their energetic co-presidents, Ronit Mesterman and Anna Shkolnik, as well as to the speaking schedule put together by a reenergized and enthusiastic programming committee. Meinhard, who has maintained her affiliation with the Hamilton group despite having moved to Toronto years ago, offers another explanation for Nitsan’s growth. “I really attribute it to the fact that there’s some kind of recognition in Hamilton that this is a special group,” she said, “and I think it’s special because of how we program for the community, not just for ourselves.”

Anyone interested in attending a Na’amat meeting or hearing more about the group should call co-president Ronit Mesterman at 905-869-6346 or email hamilton.info@naamat.com.