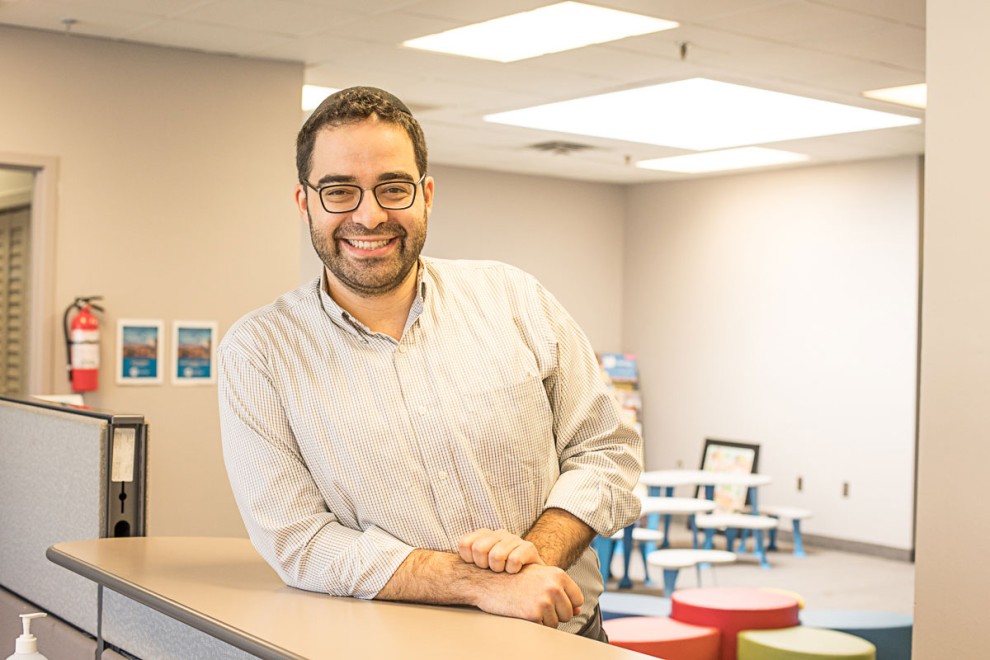 Hamilton newcomer Jonathan Riaboy went through law school, worked in real estate law, and partnered with a pop-up coffee shop experiment in Toronto, before discovering where his real passion lay. The Thornhill native, who moved to Hamilton with his wife and children in August, 2015, feels like he’s finally doing what he was meant to all along, since taking on the position of program coordinator for the Jewish Community Centre and the Hamilton Jewish Federation.

Riaboy, 32, has always felt an affinity for small Jewish communities, whether it was in Bridgeport, Connecticut, where he attended yeshiva high school, or in London, Ontario, where he and his wife lived for three years while he attended law school.

After their first child was born, the couple returned to Toronto, where Riaboy began articling at a law firm and his wife, Rachel, was hired as an on-site audiologist at Costco. It was during that period that they attended a “Think Hamilton”  event, an Adas Israel initiative that promotes Hamilton’s Jewish community to young orthodox families.  Impressed by what they saw and heard, the Riaboys moved to Hamilton two months later.

When Riaboy heard about a job posting by the Federation and the JCC  for a joint program coordinator position, he thought it sounded like a good fit.

“In all these small communities where I lived,  I was always volunteering and trying to build up the community behind the scenes ... whether it was hosting or helping with different events,” he told the HJN.  This was what he loved doing, he thought to himself, so why not do it full time?

Riaboy’s past experiences, which  included running leadership programs for Aish HaTorah and similar programs in London, Ontario made him a very attractive candidate, according to Hamilton Jewish Federation  CEO Gustavo Rymberg.

“We were very impressed with Jonathan’s past experience with different Jewish organizations,” he told the HJN, adding that hiring Riaboy is an important step in fulfilling Federation’s goal or promoting more efficiency and  resource sharing in the community.

Riaboy is charged with developing adult programing for both organizations, including JCC recreational programs, Holocaust education events and the annual Yom HaShoah (Holocaust commemoration) and Yom Ha’atzmaut (Israeli indepence day) programs. A major focus will be on developing  outreach programs for the under-40 demographic.

Speaking to the HJN on his second day on the job, Riaboy outlined his plans for the coming year. “We want to organize fun, social programs  and events at the JHamilton facility that my friends and I would want to go to, and networking events to help connect the younger crowd with successful business leaders.”

Down the road Riaboy will be looking into how tried and true models like Limmud (a volunteer-driven Jewish learning festival) and Jewish TED talks can be adapted to a Hamilton environment. For now, however, he is focused on promoting Federation’s Yesod leadership program to his cohort.

“The Yesod program is about connecting back to Jewish values and being the leader when there’s no one else willing to step up,” he said.  It’s hard to imagine a better role model than Riaboy himself.

Jonathan Riaboy can be reached at 905-648-0605 or by emailing jriaboy@jewishhamilton.org.