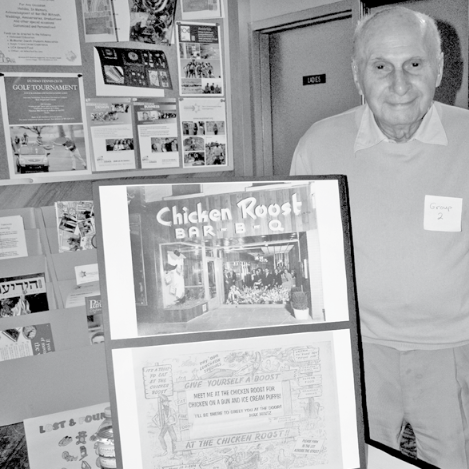 Whether it was good corned beef, a new pair of shoes, tires for the family car, a mink stole or printed invitations for that special family event, everything a family could want was once available from a Jewish merchant in downtown Hamilton.

And the shopping trip to get all those necessaries could always be topped off with dinner at the Chicken Roost.

That world has been gone for almost half a century now, but the memory of those days lives on with the children and grandchildren of the Hamilton Jews who started those stores and brought life both to the city core and the Jewish community.

A collection of those descendants gathered recently to record some of their memories as part of the Working Families Project.

Bella Muller (nee Zucker), for example, remembered the days when her mother and aunt operated competing delicatessens on opposite sides of York Street and the tantalizing aroma of corned beef wafted up and down the roadway.

"York Street smelled like corned beef because there were so many Jewish delis," Muller recalled. "Downtown was fabulous then. You could go for a walk there for hours. The shops were individual and beautiful, it was someplace special."

In the days before a faceless brick mall and a steel tower erased much of downtown Hamilton in the name of "urban renewal," Jewish businesses were scattered throughout the city's core. For many of the merchants, operating a small family-owned business was one of the few employment options open to them.

"It was what they knew, and there weren't a lot of jobs for Jews in those days," recalled Gerry Bromstein while furrier Alan Livingston remembered his father stayed in the fur business because Jewish quotas kept him out of medical school.

Bromstein's father, Frank Dorsen, operated a shoe store on King Street for many years, taking son-in-law Larry into the business as well.

"In that era people came from all over the region to shop downtown, he remembered. "The repeat business we had was phenomenal and on Boxing Days sales we'd have women lined up around the block looking for a bargain."

Downtown Hamilton offered more than just its core of hard working Jewish families living above their stores. There was also a cadre of colourful characters living on the fringes of the law and the community.

People like the Pickle Brothers -- Max and Barney Bloom - who Lorne Richter remembers "running around the street helping people place a few bets on the horses or a football game."

Those bets weren't the only action going on - Muller remembers the back rooms of most of the city's delis had a card table or two that were seldom out of use. The deli owner, course, got a piece of the action.

"They did very nicely in the back too. If you were looking for somebody's husband you could usually find them in the back of one of the delis," she recalled.

Of the entire cast of downtown characters, however, few were more colourful than Max Mintz, king of the Chicken Roost.

Mintz came to Hamilton in 1948 with his brother Benny. They'd learned the restaurant trade working for their father in his eatery The Chicken Palace, but thought they had some better ideas.

The Chicken Roost quickly became the place to eat in Hamilton, especially for the Jewish merchants.

"All the Jewish boys came in at noon hour to discuss the world," Mintz recalled, adding he also attracted his share of celebrities over his 38 years in business - including entertainers such as Mae West and Liberace and political stars including Pierre Trudeau.

Many of the Jewish-owned firms vanished during the urban renewal wave of the 1960s and 1970s. That added to a loss of interest in a family business as old barriers to employment and education fell.

"When Jackson Square came in (Frank Dorsen) said it was going to kill downtown," Larry Bromstein recalled. "In 1980 I went into real estate because I finally saw the writing on the wall for an independent retailer."

A few firms found a new life out of the core - the Richter family, for example, moved its car businesses out of downtown to a new life in the farm east end of the city.

"My father ran Ricks Auto Service from 1947 until 1953 and then moved to Hess and Main to start Hamilton Motor Car," Lorne Richter recalled. "His father was a blacksmith at McNab and Cannon and my great-grandfather was a carriage maker on Cathcart in same area.

"We're sitting with my great-grandfather, grandfather's father, myself and my children being the fifth generation in the wheels business."

Jordan Livingston Furs is another example. The firm was acquired by the Livingston family in 1940 and when its downtown home was expropriated for Jackson Square its store moved to Burlington and its factory and storage vaults moved east.

The loss of Hamilton's class of independent Jewish merchants has come at a cost for the community as a whole.