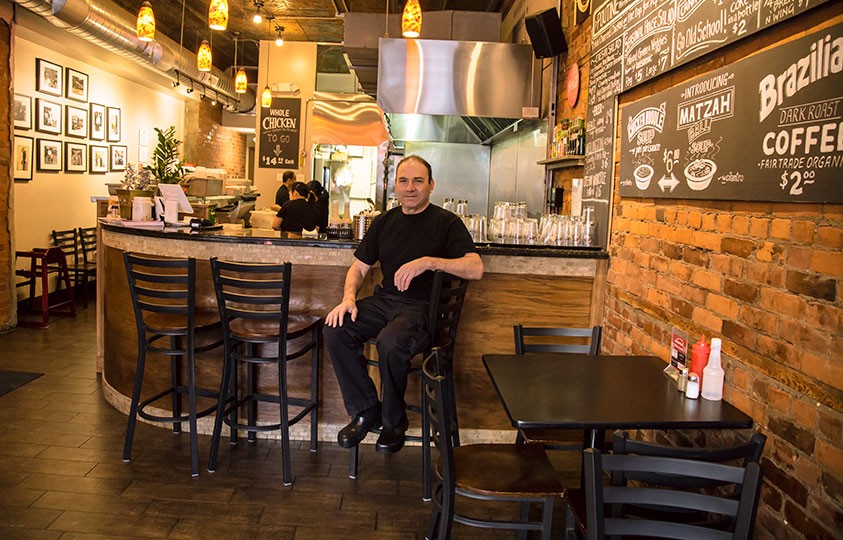 The photographs on the wall facing Charred’s open-style rotisserie tell the multi-layered story of an immigrant family’s journey to Canada. Occupying the same building in which his parents opened Morningstar Clothing and Shoes — the precursor to Morgensterns — back in 1968, Charred is both a salute to the past and an act of faith in the future of James Street North. A tour of the family wall is a must for the first-time visitor, because the photographs — from the Israeli moshav where the Morgenstern children grew up, to the early years in Montreal and the mug shot outside the family store — tell you what matters most to Mark Morgenstern. Softly, almost reverentially, he says, “This is where we started.” Welcome to Charred.

In 2008 Mark Morgenstern decided to close the London, Ontario clothing store he had managed for 33 years. Worried about what the future might hold for his long-time employees, one of his managers reassured him. She’d be going to work for her brother, she told him, at his very successful Portuguese-style barbeque chicken restaurant. His curiosity aroused, Morgenstern went to investigate. “Wow!” he thought. “I have the perfect spot for something like this.”

It took five years of careful planning before Charred opened its doors. The first hurdle to cross was convincing his brother and sister that opening a restaurant in their jointly-owned building was a good idea. At first, they couldn’t wrap their heads around it. “Why not just open up a coffee shop?” his sister wanted to know. “That wasn’t me, to have little pieces of cake,” he said. “I was focused on the chicken.” In the end, they agreed, and today, everyone is very happy.

Rotisserie chicken made in an open style kitchen and freshly made French fries were the main ingredients of Morgenstern’s vision. That his wife’s matzah ball soup and poutine are equally popular has been an unexpected surprise.

James Street North, five years ago, was not what it is today, but it made more economic sense to open in a building the family already owned than in another location. What happened next made all the difference in the world. “The art crawls have transformed the street completely ... You could spend millions of dollars on advertising, but it’s not going to do what the art crawls and Super Crawl do.”

Social media and the restaurant business

Of the 943 Hamilton restaurants listed on Urbanspoon, Charred has consistently placed in the top 15. “Social media is just amazing,” said Morgenstern. “It’s the best kind of advertising. It’s not me pushing it. It’s the customers. It’s a different world completely.”

It goes without saying that Max and Cynthia Mintz have checked out Charred. For Morgenstern, who remembers eating at the Chicken Roost as a youngster, having the Mintz stamp of approval means a great deal. “It will be fantastic if I can do what they did.”

What makes his day

“The best satisfaction is the thumbs up from the customer, because then you know what you’re doing is the right thing.”