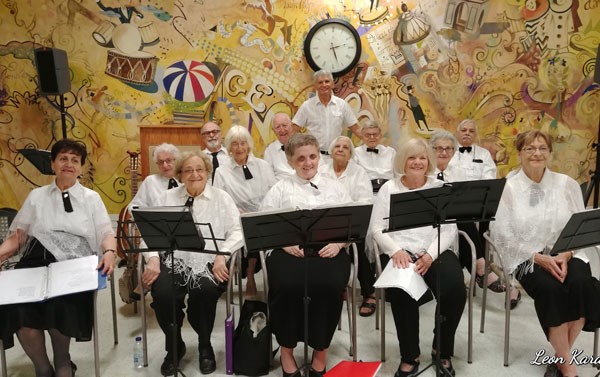 If you want to live a long, healthy life, there’s a place for you in Hamilton Jewish Social Services’ Chai Choir. Singing in a choir has been associated with a myriad of physical and mental health benefits, a statement with which Chai Choir members, many of whom are well into their 80s or 90s, wholeheartedly agree.

Now in its 25th year, the choir was the brainchild of the late Goldie Robbins, a one woman force-of-nature who single-handedly recruited as many as 30 members along with choir director Leon Karan, a classically trained pianist and music educator from the former Soviet Union.

Inevitably, the  years have seen the choir’s numbers decline to half that amount, and Chai Choir members would dearly like to see a return to their glory days.

David Papernick, 71, is one of the choir’s youngest members — “a pisher,” he jokes —  as well as its part-time musical accompanist and co-director.

“In a group like this you’re always trying to recruit because many people pass on,” he said. Papernick fell in love with the choir four years ago and can’t say enough about its uplifting effects.

“Singing in a group is very therapeutic,” he said. “It’s a high ... working together, hearing a tone, the breathing.”

Proper breathing is the foundation for both good singing and good health, said a beaming Karan as he recalled the day that Ruth Fine, 86, called the JSS offices from her hospital bed one Tuesday morning just  to tell Karan and her fellow choir members how the breathing exercises they do every week helped her recover from a bout of pneumonia.

Aside from the physical benefits, the Chai Choir offers its members a valuable form of social support, as well as introducing them to the rewards of performing before a live audience.

“When we go to the nursing homes and see the residents interact and sing the songs of their youth, you can almost see them transcend back into their youth,” said Maureen Mansfield. “I feel a sense of happiness and calmness. It’s like doing yoga, you’re just transcending to another world.”