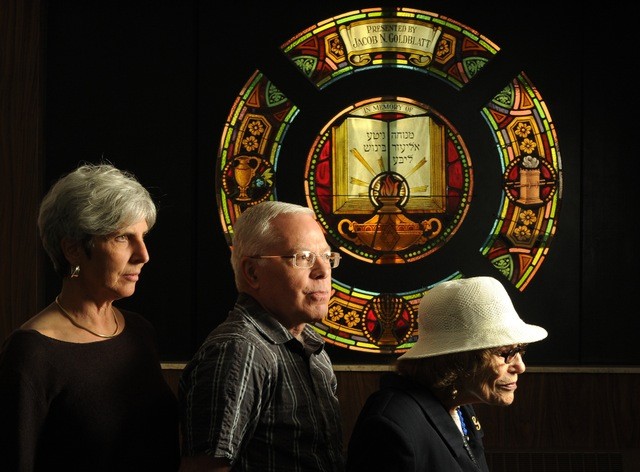 A piece of Beth Jacob's history has resurfaced after more than 50 years and will soon be coming home.

A five-piece stained glass that once looked down on the bimah of the old Hunter Street shul had been buried for the last half century in the basement of a man who purchased it on a whim. The window was commissioned by Jacob Goldblatt in memory of his wife, Menucha, and the family name, and hers, are prominently featured. Goldblatt, who came to Canada from Lithuania at the end of  the19th century, was a noted philanthropist, a primary benefactor to the shul and one of its presidents. His wife, who had suffered from Parkinson's disease, died in 1919, making the memorial window about 85 years old.

As the congregation began to grow and prosper in the 1950s,  plans were made to relocate the synagogue in Aberdeen Avenue.  Some of the fixtures from the old shul, including the pews and the carved wooden Aron Kodesh, became part of the new building's small chapel, but the window, being an integral part of the building, was left behind. It would have been difficult to remove and replace before the building could be sold, at a time when all funds were earmarked for the new synagogue. Neither would it have fit the streamlined, modern look.

Jacob Goldblatt
In all the excitement of the new, the old was gradually forgotten. The old Hunter Street Shul changed hands more than once before being slated to be torn down for City Hall's parking lot. By then, nobody remembered whose shul it had been to offer them a last chance at what was left, and nobody from Beth Jacob remembered that anything valuable had been left behind.

But the window got a last minute stay of execution in the spring of 1965, when Hamilton physician Bob Dickson, then 25, hired a local tradesman to remove and crate two stained glass windows from his grandmother's former home, with the thought of installing them  in a future home. Shortly after, the tradesman called him back with a question. Would Dickson, he wondered, be interested in purchasing

Menucha Goldblatt with her children
an additional stained glass window from "an old synagogue that's being torn down?" Dickson, an avid collector, bought the window, sight unseen, for   $35 plus crating fees, and had it carefully  stored in the basement of a friend while he  continued his studies in England, California and Ottawa. Eventually he settled again in Hamilton, taught in McMaster's new medical school briefly and then trained as a family physician.

Dr. Bob Dickson
The Beth Jacob window remained unopened until 1984, when Dickson remembered it and thought he ought to sell it. He brought it to Classical Stained Glass in downtown Hamilton, where proprietor, Lowell Souci uncrated it and discovered the inscription bearing Jacob Goldblatt's name.  Dickson began trying to contact the family at random through the phonebook, leading to a brief opportunity that slipped by.  Some time in 1985 Marvin Goldblatt, accompanied by interior decorator, Harvey Sobel, walked into Souci's store. According to Souci, Goldblatt considered purchasing the window for his new office, but Sobel  dissuaded him as it would not suit the sleek modern look they had planned and neither could think of another place for it. Nobody thought that the place for it might be back in the synagogue. Once again, a desire to move into the future had blocked the window from the past.

Another 30 years went by. During that time Dickson would, from time to time, remember the window. At one point he considered offering the window as a donation, in exchange for a tax receipt, to Shalom Village, but no agreement could be reached on a value. Three years ago, now in his mid-70s, Dickson decided he should make some permanent arrangement.  He  connected with Rabbi Bernard Baskin, known to him through his Spectator column. "I thought I'm getting older and I didn't really need a stained glass window, a Jewish stained glass window, so I should really do something about that before I drop dead and my kids don't know what to do with it," Dickson said.

Hunter Street Shul interior
Recognizing the window as a piece of Beth Jacob history, Rabbi Baskin contacted Wendy Schneider, a former co-president  of the synagogue and member of the Goldblatt family, indicating his desire to see it returned to its rightful place. Schneider, whose Hebrew name was given in remembrance of  her great-grandmother Menucha, was delighted by the discovery and last spring, she acquired the window on Beth Jacob's behalf.

"I think the whole thing in terms of how this came to be is bashert," Schneider said, recalling the reaction of the synagogue's board of governors when they heard the story. "They couldn't believe that something that had been in the Hunter Street shul in the '50s has resurfaced after all these years."

As part of her efforts to raise funds to restore and display the window in time for the synagogue's125th celebrations on June 9, Schneider has shared the story with long-time Beth Jacob members who can still recall the old Hunter Street Shul. Goldie Robbins's eyes lit up on hearing the news,  "What a wonderful miracle," she said.

For Rabbi Dan Selsberg, the repatriation of the Hunter Street Shul window has particular signifiance.

"When I read the history of Beth Jacob Synagogue, I read about how Jacob Goldblatt was not only a primary benefactor of the shul, not only the president of the shul for decades, but also lead services on High Holidays ... These windows were above the ark, where the prayer leader, looking up, would see sunlight falling through them. To have artwork that doubles as an emotionally and religiously resonant part of Jewish history recovered is wonderful. To recover, reframe, and rededicate these windows as we prepare for our next 125 years tells a uniquely Jewish story."

The story of the Beth Jacob window is, ultimately, a Jewish story - about exile and return, the weight of history and the bonds of family and community. It's about how easy it is to forget the past in the excitement of the now and the plans for the future, and how what one generation leaves behind, another will rediscover and find value.