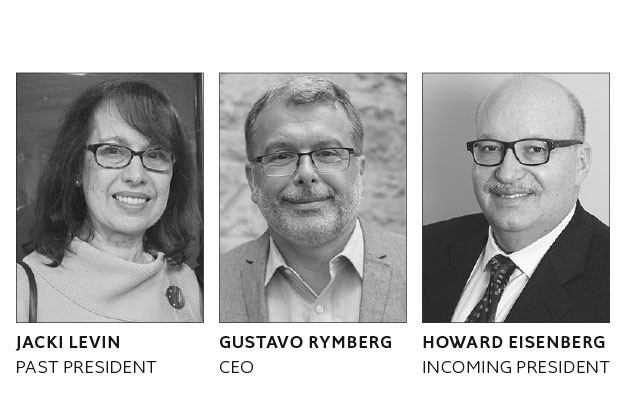 The COVID-19 pandemic has inflicted enormous hardship on Hamilton’s Jewish community but the current moment has also revealed a resiliency forged by strong leadership, communal cohesiveness and the dedicated efforts of hundreds of volunteers. Research tells us that connected, trusting and cohesive communities, where people know and care about each other, are more resilient than those that are less connected. That Hamilton’s Jewish community can recognize itself in this description is due, in no small measure, to the exemplary leadership of Hamilton Jewish Federation CEO Gustavo Rymberg and the organization’s volunteer president, Jacki Levin, who stepped into their roles three years ago.  HJN spoke with Levin, Rymberg and incoming Federation president, Howard Eisenberg about the accomplishments of these past three years and the organization’s vision for the future.

When Jacki Levin re-joined the Federation board in the spring of 2017 after having served on its executive in years past, she could never have anticipated that within a few short months she’d find herself assuming the Hamilton Jewish community’s top lay leadership position.  But then former Federation president, Carl DeLeon, announced his imminent move from the community weeks after a search committee (of which Levin was a member) recommended hiring Gustavo Rymberg as the Hamilton Jewish Federation’s new CEO. Levin knew that his plans to transform Jewish Hamilton stood a much better chance of success with the support of someone with intimate knowledge of the community.

Three and a half years later, Rymberg and Levin’s partnership serves as a case study of what’s possible when a Federation CEO and president enjoy a supportive and collaborative relationship.

“It’s been a joy, really, working with Gustavo and being a small part of helping our community get revitalized,” Levin told the HJN in early December. “Gustavo’s aim was to transform the community. My job was to facilitate Gustavo doing his thing.”

The revitalization process began almost immediately, with Rymberg’s taking action on an idea that had circulated within communal circles for decades. The creation of JHamilton  — which provided a new home for the Federation, the JCC, the Jewish National Fund and the Beth Tikvah Foundation — brought the dream of  a Jewish campus in the city closer to reality and ushered in a spirit of renewal and collaboration within the Jewish community.

The last three years have also seen the merging of the Hamilton Jewish Federation and the JCC into a single entity, a renewed partnership between Federation and Jewish Family Services (formerly Jewish Social Services), an influx of younger members into the Federation board of directors, and the formulation of new strategic priorities.

Federation also moved community-wide programming into venues like the Art Gallery of Hamilton, the former Hamilton Spectator building and City Hall, to make unaffiliated members of the community feel more welcome. It also added a wide range of innovative programming, such as a revitalized Holocaust Education Week and Jewish book and film festivals, which did not go unnoticed by the community.

“The Community Campaign was at a low ebb before Gustavo came in,” said Levin, in contrast to where Federation’s annual fundraising campaign finds itself today.

“This has been a challenging year,” she continued, “and we were very concerned about how the Community Campaign would do, but in fact, the community, right from the Passover Campaign back in March, really stepped up … They have trusted the Federation will do the right thing and is doing the right thing for our vulnerable population and they’re willing to support us in doing that.”

Levin went on to list the ways in which Federation earned that trust. Most notable among them was its partnership with Jewish Family Services and the synagogues, which saw volunteers from across the community spectrum shop and deliver food packages to the vulnerable, and strong committee work by an engaged board of directors who brought forward a number of new initiatives in the areas of Jewish education and strategic planning.

“We’ve really been very lucky and had a lot of resources on our board. One of the wonderful things was when everybody on the board wanted to stay on the board … And of course,” said Levin, “one of the most important things is that I secured Gustavo until 2025. That is one of my great accomplishments.”

At Federation’s AGM this coming May, Levin will pass the mantle of leadership to Federation VP Howard Eisenberg, who has been studiously preparing for his new role.

“We’re very lucky to have Howard,” said Levin, singling out his work as chair of Federation’s strategic planning committee for special praise.

Rymberg, too, praised Eisenberg for overseeing a complex process that resulted in a strategic plan that has since been adopted by other small Jewish communities.

“Howard oversaw a process in which we set goals and priorities for the future based on the strategic plan that the community put together,” he said, “and meeting those goals will be the focus of his presidency.”  Those goals include growing Federation’s annual Campaign, community endowment fund, and volunteer base, and securing a permanent home for JHamilton in the form of some kind of community campus.

Regarding his and Levin’s partnership, Rymberg said, “I think that we were both very lucky to be starting fresh at the same time ... For both Jacki and me, community came first and we were always very focused on bringing the community together and on being transparent, so that people would know exactly where their donations were going.”

Rymberg feels immense pride about what the community achieved over the last year,  mixed with a little regret. Regret that the community didn’t come together at Yom Ha’atzamaut and Yom HaShoah; that 1,000 Hamilton area high school students missed out on Federation’s Student Symposium on the Holocaust; that three Hamilton couples and four local Grade 11 and 12 students missed out on a cancelled March of the Living experience.  But he also feels pride that, despite the trials of the COVID-19  pandemic, the community’s generosity has made it possible for Federation to do its work for another year.

“I really see that the community understands that Federation is essential to the Jewish community,” he said.  “We fed the hungry, matched volunteers with our more vulnerable community members, and hosted excellent Jewish book and film festivals. We tried to make ourselves relevant and essential to the community, and we succeeded beyond all our expectations.”

For anyone who knows anything about Howard Eisenberg’s background, that he would one day find himself president of a Jewish Federation is not surprising. Eisenberg was raised in a family steeped in Windsor’s Jewish communal life, owing to the fact that his father,  the late Joe Eisenberg, was that city’s Federation executive director for 31 years. An immigration lawyer who moved to Hamilton in the 1980s, Eisenberg has always looked back at his formative years that saw Windsor Jewish youth spending the majority of their time at JCC or B’nai Brith Youth programs with great nostalgia.

The same is true for his early years in Hamilton, when he was welcomed into the B’nai Brith Men’s Bowling League and the city’s Jewish softball league. Eisenberg began taking on leadership roles in the community with stints as president of his B’nai Brith lodge and president of the JCC. When the JCC closed its doors, he joined the Federation board, and has risen through the ranks since then.

Eisenberg considers himself  “the luckiest guy in the world because I am getting mentored by two of the best.”

“It’s such a pleasure to deal with these people who are really competent, yet unassuming... They take their work very seriously … I have so much to learn, I’m so excited about this.”

Eisenberg’s vision for his term is to see the return of the B’nai Brith Youth Organization (BBYO) to Hamilton and have Federation continue its fight against antisemitism.

In the meantime, Eisenberg envisions community programs will continue to be offered virtually “until we’re safe.”

“What’s been remarkable to observe during this last eight or nine months is how we have been able to keep going during COVID … I think we’ve done great.”