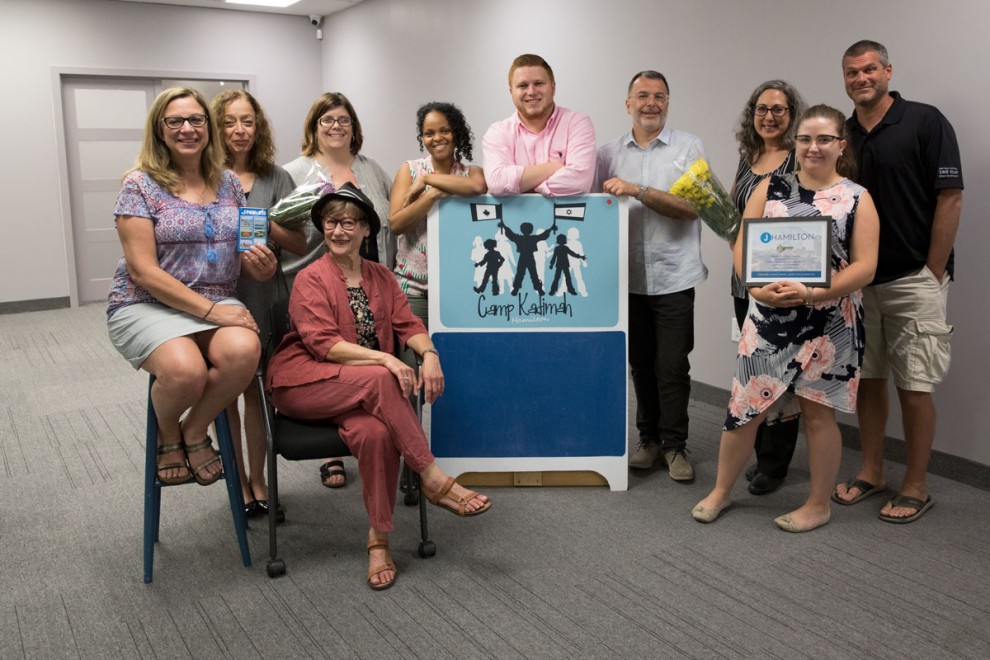 Necessity, to paraphrase the well-known adage, is the mother of collaboration. After years of discussion among Hamilton’s Jewish communal organizations about the need to share resources and reduce costs, the Hamilton Jewish Federation, the Jewish Community Centre, the Jewish National Fund, and the Beth Tikvah Foundation have moved into a shared space on 1605 Main St. W. The new community hub, named J Hamilton, its occupants anticipate, will stimulate cross-fertilization of ideas that will invigorate this city’s Jewish communal landscape.
The announcement about the new facility was made at the Hamilton Jewish Federation’s Annual General Meeting on May 24 by the organization’s president, Jacki Levin. “The Jewish Community Centre will once again have a home where community members can go to relax and have programs, and where community agencies can host lectures and movies and board meetings,” she said, adding, “The possibilities are endless.”
Since the sale of the Jewish Community Centre in 2016, Federation, the JCC and the Beth Tikvah Foundation have shared office space at the Effort Trust building at105 Main St. E. down the hall from the Jewish National Fund office.  The move downtown was seen as a temporary solution until a more appropriate site located closer to where Hamilton’s Jews tend to congregate could be found. Over the last several months, Federation CEO Gustavo Rymberg, Jacki Levin and JCC co-president Lowell Richter looked at a number of sites, but none compared to the Main West building both in terms of location (just in front of Fortinos) and space.
The concept of J Hamilton is loosely modeled after “1 Open Door,” a communal space located at the Lebovic Jewish Community Campus in Vaughan that’s shared by several UJA Toronto’s partner social service agencies.
“J Hamilton represents a new model of efficiency that will save money for the community,” said Rymberg, adding that the goal is to eventually hire a human resources manager and marketing director  that all the organizations will share.
The building layout maximizes the use of the space. In addition to separate areas for each of the four agencies, there’s a common board room, lounge, play area geared to families with young children, kitchen and multi-purpose room that can be used for programming, lectures or other events. As for the walls, Rymberg envisions a gallery featuring rotating exhibits by local Jewish artists.
“This is going to be a centre where a lot of things are happening at the same time,” he said.
It’s been two years since there’s been a neutral place in Jewish Hamilton where both the unaffiliated and people from across the religious spectrum can come together for social and cultural events. J Hamilton, in being a new home for the Jewish Community Centre,  will fill that void.
“This is a great opportunity to reenergize, reinvigorate,  recharge and reinvent our Hamilton JCC, that has been and will continue to be a strong part of the Hamilton Jewish landscape,” said JCC co-president Lowell Richter, who has been instrumental in implementing  the move to the new site. Watch for a slew of new JCC programming at the new site beginning in September.
Jewish National Fund executive director Suzy Polgar is excited to see the JNF move to west Hamilton. “Ever since I started working in Hamilton I always felt that there should be one location for all of the Jewish organizations,” she said. “I just feel that we’re all stronger together. We’re a small community and, rather than compete with each other, I think that everybody is better off working together and sharing resources.”
The Beth Tikvah Foundation, which provides services to adults with developmental disabilities, is similarly delighted with its new home. “Because we’re a smaller agency, we haven’t really been out there, so this move is a great opportunity to inform the Jewish community about the support we can offer to individuals in the realm of developmental services,” said Beth Tikvah executive director, Chris Barone. “It’s great for all four agencies and it’s fantastic for the Hamilton Jewish community.”
To Gustavo Rymberg and Jacki Levin, the most exciting aspect of a shared communal space that promotes collaboration and stimulates cross-fertilization of ideas lies in its potential to invigorate the entire Jewish Hamilton landscape. That vision is undoubtedly what brought Tom Weisz on board.
“Without Tom’s support, this couldn’t have happened,” said Rymberg.
While many in Jewish Hamilton have dreamed of a state-of-the-art community campus, Rymberg believes that J Hamilton is a more realistic investment at this point in our community’s history.
“It’s going to be a good test for the community towards visualizing the next step. Let’s see how people respond and how they support this project.”
Community members will have an opportunity to do just that at an upcoming open house to launch the 2019 Community Campaign, whose tagline is aptly named, “Together.”