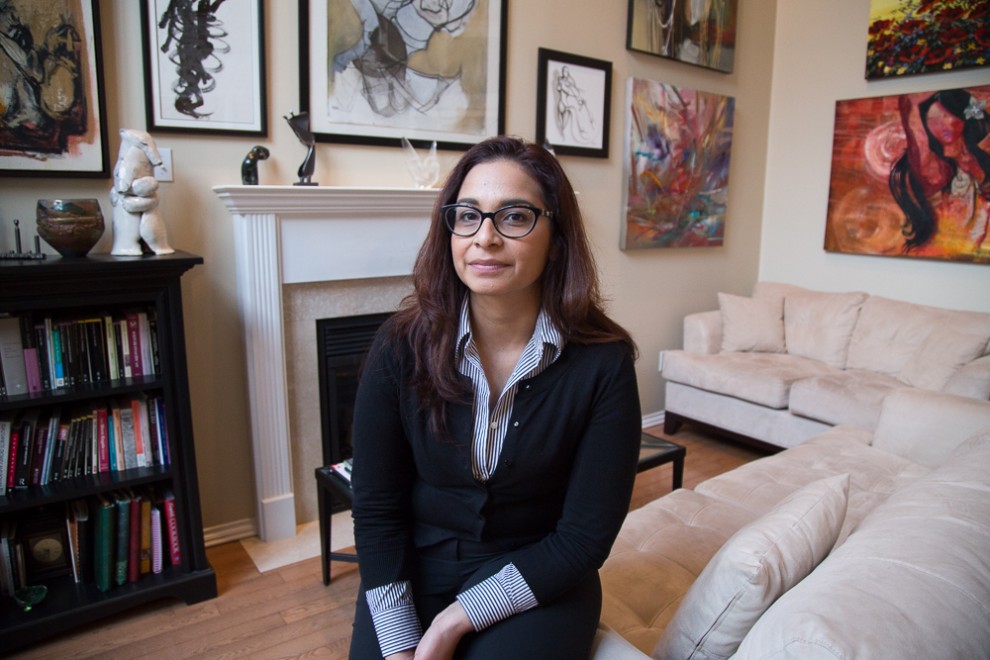 As a child, Alma Arguello’s parents were forced to flee Honduras and leave their four children in the care of a grandparent. It would be two years before the children were reunited with their parents in Canada and discovered their Jewish heritage. Arguello’s story and the stories of other Jewish immigrants to Hamilton will be featured in an upcoming exhibit at the Rose and Phil Rosenshein Museum at Beth Jacob Synagogue, scheduled to open in September, 2017.

Alma Arguello’s voice cracks with emotion as she recalls how her family was forced to flee Honduras.

“The military police came to get my dad. … (My mother) ... had ‘disappearing’ orders.’ And when you get disappearing orders, it means you’re going to die.”

It was 1988 and it would be two years before Arguello and her three siblings saw them again.

Arguello’s father was Catholic and her mother was raised in a Conversos Jewish family, where Judaism was practiced in secret. Before their parents’ arrest, Arguello and her siblings had enjoyed an affluent lifestyle, living at various times in Italy, Brazil and Portugal, wherever their father, Miguel, a Honduran diplomat, happened to be posted. Their mother Norah was a physician with Doctors Without Borders, and spent long periods of time away from the family. The turning point came with a change in government that saw their father called back to Honduras. It was not long after that that their father was arrested and their mother apprehended. “She was … accused of promoting communist and socialist propaganda. So she also got arrested.”

Arguello’s parents’ escape from Honduras was orchestrated by an uncle of Arguello’s mother, with connections to the military, who persuaded the authorities to place the couple in his charge.

“He drove them to the airport, put them in a plane, and told (the authorities) ‘I don’t know where they are.’” The escapade landed Arguello’s uncle in jail, but he was subsequently released. Arguello’s parents would end up in Toronto, where they claimed refugee status.

Back in Honduras, Arguello and her siblings, aged 2 to 12, were being looked after by their paternal grandmother. Their parents’ arrest, however, had made them vulnerable, and it was soon apparent to their family members that they, too, would be better off in Canada.

Two more years would pass before the children were admitted into Canada under an emergency family reunification provision. Once arriving in Canada in 1991, the children experienced a difficult adjustment period. Not only had they been separated from their parents for several years, but their standard of living was considerably lower than it had been in Honduras.

“We had a beautiful life in Honduras … a nice, privileged life,” Arguello remembers. “ We went to private schools, we still had a nanny.”

Like so many immigrants, her parents found themselves in the position of not being able to pursue the careers for which they’d been trained. Her father now worked in construction; her mother, whose lack of English made it impossible for her to find a job in the medical profession, also ended up in the construction business. Eventually, the family opened up its own cleaning business.

The children, in the meantime, were enrolled in Catholic school, and had no notion of their Jewish backgrounds. Arguello recalls vividly the way her mother cringed the day the children came home from school asking why they couldn’t have a Christmas tree. “It’s because we’re Jewish,” she told them.

“I was devastated,” Arguello recalls, convinced her classmates would stone them for not being Christian. Their father tried to reassure her that here in Canada, there was nothing to fear, but when her mother tried to give her sister a Star of David to wear, her sister refused.

With the help of a Chabad rabbi whom the family had befriended, and who gave the children Jewish books translated into Spanish, the family began to learn about and embrace their Judaism.

“To me ... it sunk in and made sense ... because even at the Catholic school, I was not like those kids.”

By the time she was in Grade 8, Alma was proud that she was Jewish. By then the family was living in Mississauga, where they were taken under the wing of Rabbi Lawrence Englander of Congregation Solel. Rabbi Englander instilled in Arguello “a sense of belonging, something that I hadn’t really felt in a very long time,” she recalls. “He was amazing.” It was Rabbi Englander’s influence that led to Arguello’s father taking conversion classes at Temple Anshe Sholom with Rabbi Irwin Zeplowitz.

“My dad would say, ‘come with me, help me translate and you can help me study.”

Years later, her husband, Hamilton native Barry Yellin, would tell her she was meant to be in Hamilton. The two met at the University of Windsor, where both were active in the Jewish Student Association. The couple eventually married and settled in Hamilton.

But the experience of becoming part of a Jewish community that has an overwhelmingly European bent has not been easy, says Arguello, who is executive director of Sexual Assault Violence Intervention Services (SAVIS), based in Oakville. As a Sephardic Jew from Honduras, where people are discouraged from practicing their Judaism openly, she has felt the sting of being an outsider.

On Friday nights in Honduras, Arguello would listen as her grandmother hummed her blessing over the candles. Years later she would recognize that same tune — this time with its accompanying Hebrew words — at the Adas Israel. For Arguello, the moment provided confirmation of the authenticity of her Jewish heritage.