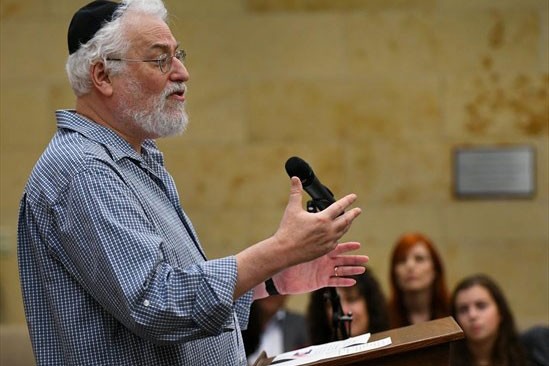 Brenda Burjaw says that a few days after seeing the antisemitic graffiti in the parking lot of Beth Jacob Synagogue on Oct. 5, her pre-teen started to feel anxious. She was having difficulty dealing with what she had seen, along with all of the hate she sees on social media and in the news directed at Jews around the world.

“Our pre-teens and teens are exposed to the world through social media platforms. There are limited controls for what they see and the constant stimuli of seeing reports of hate crimes, shootings and environmental destruction becomes overwhelming,” said Burjaw.

“As parents, we do our best to talk. As a granddaughter of Holocaust survivors, I’ve always discussed our legacy and our need to remember the stories, the reasons to be proud of our heritage and culture. But this very pride is what now burdens our children. Are they safe to be proud? How can they be safe and proud of being Jewish at the same time?”

When Burjaw turned to a community Facebook group for guidance, other moms shared similar concerns—of wanting to instill Jewish pride in their children while making them aware of harsh realities.

Three weeks after the graffiti incident, Beth Jacob held a discussion for youth in grades six to 12 with Rabbi Chuck Diamond. Diamond is a former rabbi of Pittsburgh’s Or L’Simcha Congregation, located at the Tree of Life building where a gunman killed 11 people in October 2018. Since then, he has become a spokesperson for the community on various news programs and has given his presentation, "When Thoughts and Prayers Aren’t Enough," to many communities, including Hamilton. He has also spent parts of the past 45 summers at Camp Ramah in Muskoka.

“This is part of their reality. They all go to schools where they are the only Jew, or among a handful of Jewish kids,” said Rabbi Diamond of the Beth Jacob discussion participants. “They have experienced other kids saying things, when they might not even realize how hurtful they are being, for example, making fun of someone wearing a kippah.”

During their discussion, Rabbi Diamond suggested to the youth that they do things as a group, including raising awareness but also just socializing. He recommended joining with kids from different backgrounds—to create a dialogue and to get to know each other and have fun.

“This would deepen connections and also make them feel they are doing something. They can feel good being together and feel like they are taking action and participating. They can be a voice for kids.”

“The gathering with Rabbi Chuck Diamond was a blessing. When I was a pre-teen, his visits at Ramah made an impression on me. He always had the right words to make me feel loved and confident as a Jew. His recent experience with his community made him the perfect role model for our Beth Jacob kids. The event was an opportunity for our kids to see they are not alone. This was a great start to something, an opportunity to learn, build connections and be reassured.”

And something is starting. Members of Beth Jacob’s Yak and Snack group, a monthly drama group for Grades 1 to 4 and discussion group for Grades 5 to 9 run by Anna and Denise Lilliman, have discussed initiatives including creating a pamphlet for public schools describing how antisemitism feels, increasing youth participation in synagogue services and possibly starting a youth minyan.

“We need to find ways to support our pre-teens. They need to feel a connection to the very fabric that helps to give reason for having pride in being Jewish,” said Burjaw.

“I’d like to challenge other families with pre-teens to make being connected a priority. Attend the programs at your shul, participate in the programs at JHamilton, volunteer. Make your contribution to a Jewish lifestyle, whatever that means to you, a priority. Let’s empower our kids to teach the world to Never Forget what happened and how it happened, to prevent the hate from growing.”