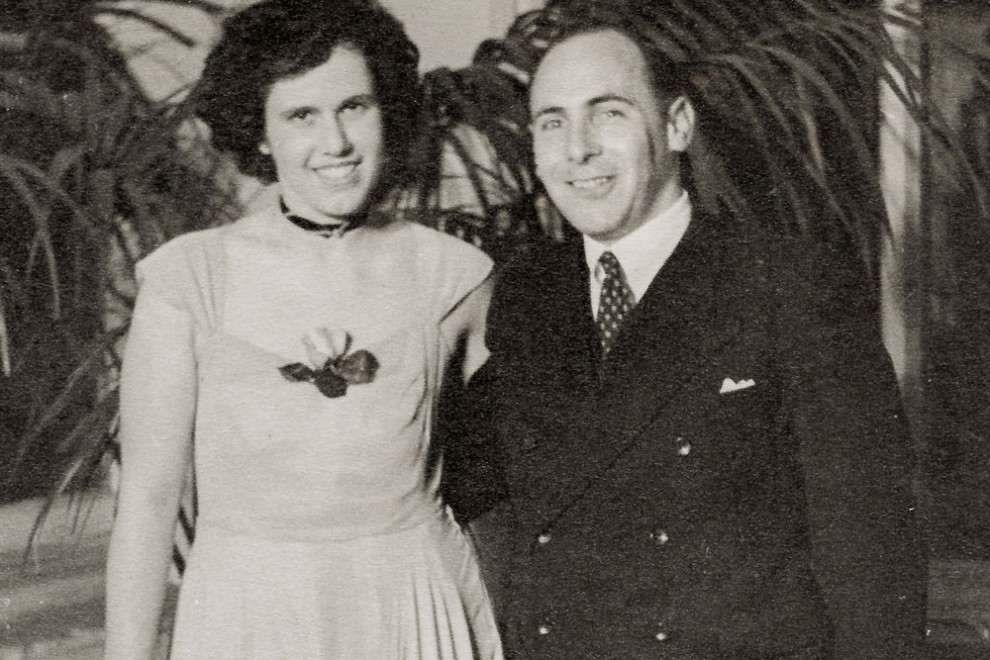 Every once in a while, you hear a story that stops you in your tracks.  In May of 2019, I stumbled across the story of Gale Halpern and Peter Jacobs.  I learned that Gale and Peter made a donation to the Erwin Jacobs Holocaust Education Fund, founded by their father in 1996.  What makes this donation remarkable is not just how the Holocaust education fund enables our community to promote tolerance and understanding, it is the story behind it that makes it truly extraordinary.

This summer, I interviewed Gale Halpern from her home in Ithaca, NY.  She spent more than an hour with me, explaining the history of her family’s restitution.  Her family received compensation for their Berlin factory that was taken by the Nazis.  Her father’s parents owned a women’s coat factory, and his cousin’s parents owned a dress factory in the same building — manufacturing was a way of life for the family.  The Nazis took this all away and the coat factory was given to an employee who was a Nazi.

Halpern shared with me that receiving the restitution funds was “something really painful” for her family.   She explained the long and costly bureaucratic process of applying for restitution and how the family was told its claim had been denied.  By the time the funds were granted, her father Erwin had died and her mother was very ill.  When the restitution came through, it was a surprise, as the family had given up pursuing its claim.  Halpern said it was “both shocking and depressing” to receive news that the claim had been approved after 30 years and neither of her parents could benefit from it.

Gale and Peter gave a lot of thought about what to do with the money and decided to donate it towards Holocaust education.

“It’s a really important subject to me,” said Halpern, explaining their decision. “I’ve done a fair amount locally in the field of Holocaust education and I am very aware of the desperate need there is to educate people about the Holocaust.”

I felt a strong connection with Halpern and the story of her family.  My great grandparents were Holocaust surviviors and I understand that no money can make up for the losses experienced by the families of those who lost not only businesses, but their families and their way of life.  While money cannot make up for what has been lost, it can be used to promote understanding of the Holcoast to future generations.

I learned a lot from my discussion with Gale.  She talked about her father’s experience in Birmingham, where he was arrested as an enemy alien and sent to the Peveril internment camp on the Isle of Man for more than a year.  I couldn’t believe that German Jews who were escaping persecution in Germany were thrown into detention camps with Nazis because they were German residents.  In effect, while the Nazis said, “You’re not a German; you’re  a Jew,” the British said, “You’re not a Jew, you’re German.”

When I shared my dismay about her father’s treatment, Halpern said that being interned actually opened up some intellectual opportunity for him. He had not attended school since he was 15 and apprenticed as a toolmaker in Berlin.  At the age of 20, he was able to meet older Jewish refugees at the internment camp and formed a community where there were lectures and concerts in the camp. After the year, he was released to work at an engineering firm in Birmingham that repaired airplane engines.

At a refugee club at Singer’s Hill synagogue in Birmingham, he met Halpern’s mother Lore who was four years younger.  Lore had escaped Frankfurt, Germany on a Kindertransport, and been housed with a Quaker family in Northampton, England.   They married and lived in Birmingham throughout the war, before moving to Toronto in 1953 and eventually settling in Hamilton in 1956.

Speaking with Halpern taught me the importance of asking questions and exploring ideas in more depth.  On the surface, Halpern and Jacobs made a contribution to Holocaust education here in Hamilton.  Yet their story is so much greater and more profound.  Because Halpern herself asked questions and was tenacious in her pursuit of justice, our community will benefit, not just from additional Holocaust programs, but from an understanding of what her family went through.

Halpern and her family have been able to use the restitution funds towards the only thing that combats hatred, ignorance and intolerance: Knowledge.

Emet Mendelson, 14, is a student at Westmount High School, who loves sailing, swimming, legal discourse and debate. He can usually be found creating memes to amuse his three younger siblings.