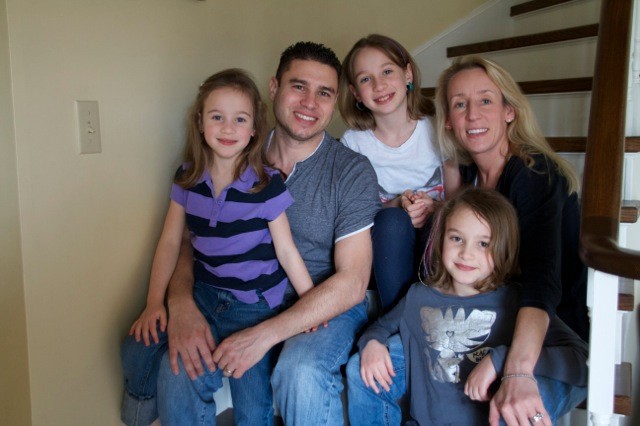 The Home:
an attractive home on a quiet street in Dundas.

In Hamilton:
Both Eric and Jodie grew up in the Hamilton area. They met through mutual friends while studying at different universities and dated for nine years before getting married in 2001. They've been together for 20 years.

Occupations:
Eric is in a partnership in a mergers and acquisition consultancy business. Jodie is a dental hygenist.

Children's Education:
The girls are enrolled at Kehila Jewish Community Day School. There were two reasons that Eric pushed that choice. "I wanted them to have exposure to other Jewish kids their age... The other reason is that I absolutely hated going to Hebrew school after school and on weekends."
"I'm thrilled with it," said Jodie.  "For me, I love the Jewish education ... I'm knowledgeable but I don't live and breathe it because I didn't grow up Jewish. For me, it was important for them to learn as much as possible things that I couldn't provide."

Community wish list:
Eric: "A well-functioning JCC. The JCC is important because it is a place where Jews regardless of affiliation can gather for community events ...If the JCC didn't exist I would say that's a shame and this community is missing something."

Jodie: "While the JCC isn't really part of our lives, I think it's important because it brings members of the individual shuls closer together to create the feeling of  a Jewish community as opposed to an Adas Israel,Beth Jacob, or Temple community ... I think that having a central, separate entity like the JCC brings the community into one central place where everybody is just Jewish."

Volunteer commitment:
Jodie: "I recently chaired a big Kehila fundraiser. I enjoyed it and I learned a lot. Hard work does not scare me ... They say if you want something accomplished always give it to someone who is busy because they're just more organized. I've never had an issue donating my time. I would absolutely do it again. I think it is important for my daughters to see that I'm contributing. Even if I only raised $100 that would be $100 that the school didn't have before.  It's not only going to directly benefit my children, but all the kids who attend, so in that sense it was rewarding to me, that my efforts meant they can purchase a new computer, or that it's not as stressful as paying teachers' salaries that month."

Demographic challenges:
Eric: "Our community just faces a challenge in a lack of people in our demographic.  Most of the people I grew up with are living in Toronto, either because of opportunity, who they married, life and work opportunities. When I see them during the High Holidays,  all of them speak fondly of growing up in Hamilton and some are seriously considering coming back ... A lot of the people at Kehila are people who did not grow up in Hamilton but came here for opportunities, and those are the people starting families now."

How can we promote more involvement in the community in order to ensure its future?
Eric: "I don't know if there's a set answer. One of the challenges is that a lot of the people who were major supporters (of the UJA Campaign) in the past had amassed a certain wealth.  Is wealth being amassed in this generation? To me that remains to be seen. I think people today have lots of stuff, more than they need, but we also have more debt, whereas my grandfather's generation started with nothing and built wealth. We're achieving what we're achieving by borrowing the money and not creating wealth.Another challenge is in how to reach out to those who have no affiliation with the Jewish community. I don't see any outreach to the (unaffiliated) doctors, teachers and the educators in the university, for instance. Finally, there are more demands on people today than in the past.  There's just information and time overload. I look at my schedule and I just don't have the time to dedicate to community."

Jodie: "I'm consumed with work, family and my kids' school, but once my kids are in high school, maybe that passion would continue and even though my children don't go there maybe you'd still play a role but not actively and maybe mentor the new parents that now have that commitment because their kids are participating there.

Eric: "It might be time to make some tough decisions with respect to downsizing our infrastructure. When businesses are in trouble the first thing you ask is, 'Does the way you're running your business right now make sense or is it time to scale back?"  And even if you look at renting out some of your space, it doesn't solve your problem if your core activity isn't sustainable."

Where do you see yourselves 10 years from now in terms of community involvement?
Eric: "If all goes according to the master plan and we have a lot more financial resources at our disposal, then we will have more resources that we can donate to the community. At that point our kids will probably be at the point when that they are starting to leave the home and we'll have more time and capacity to participate. Hopefully weÕll find something that is meaningful and important to us in the Jewish community that we can participate in."

Jodie: "But it doesn't necessarily have to cost anything to participate. You can donate your time, which is also extremely valuable.   Writing a cheque is fantastic but it is a different contribution than getting your hands into something.  I think it is important for our girls to see that this is what you do and it is my pleasure doing it and we're doing it for a good reason."