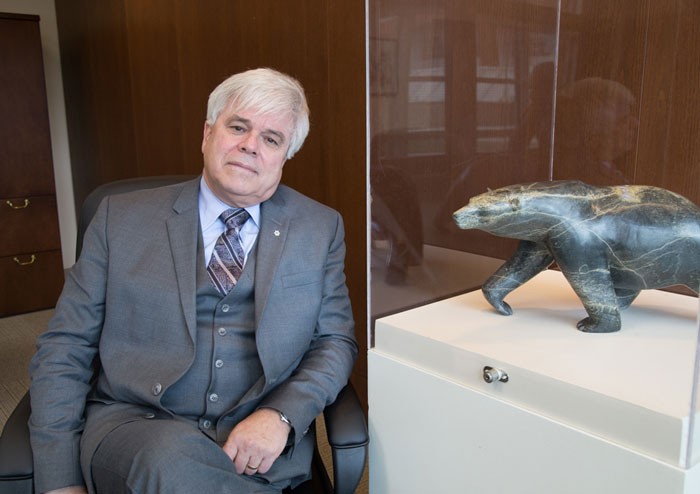 Empathy for his patients has always gone hand in hand with Dr. Mark Levine’s competitive nature. As a keen young medical resident working under Hamilton’s legendary internists Dr. Bill Goldberg and Dr. Jack Sibley, it was their emphasis on paying close attention to patients rather than relying too heavily on medical tests, that left the deepest impression. The great 19th century Canadian physician Sir William Osler famously wrote that “the good physician treats the disease; the great physician treats the patient who has the disease.” Just as they were for his mentors, these words became a guiding principle behind Levine’s illustrious career as clinical oncologist, researcher and  teacher.

Until Levine received word from the Governor General’s office late last June that he had been named to the Order of Canada, he was completely unaware that his name was even in the running. That his peers at McMaster University had undertaken the arduous process of providing documentation supporting Levine’s nomination both humbled and delighted him, but it should not have surprised him. The Order of Canada recognition was “for his contributions as an oncologist, researcher and clinician who has developed a number of new treatment regimens that have become the Canadian standard in clinical practice.” An internationally recognized cancer clinician and researcher, Levine’s 35-year career has been devoted to improving the lives of breast and other cancer patients. His clinical research  in the areas of chemotherapy for breast cancer, radiation after lumpectomy, quality of life and decision-making in breast cancer have changed how cancer is treated both in Canada and beyond, and achieved both better patient outcomes and improved quality of life. The clinical trials he led on the treatment of patients with venous thrombosis are landmark have and impacted patients around the world. At the age of 39, Levine was appointed CEO of the new Hamilton Regional  Cancer Centre (now Juravinski), growing its staff from 70 to 350 and overseeing its transformation into a state-of-the-art academic regional cancer centre. In 2007 he became the first chair of the new McMaster Department of Oncology.

Levine’s office, tucked away on the first floor of the G Wing of the Juravinski Hospital, is a warm and cluttered space dominated by an impressive display of Inuit art. The atmosphere is relaxed and informal as Levine pondered a question about what attributes have made him the man that he is.

“All my life I’ve been in pursuit of excellence. I like to be the best,” he said, explaining how, as a first-generation Canadian growing up in Montreal, his father, an engineer by profession, and his mother, a nurse, encouraged him to excel in both academic and physical pursuits. Those formative years in which he played hockey and served as captain of the  senior high school football team are likely responsible for another of Levine’s character traits: an affinity for working collaboratively. “We believe that breakthroughs and innovations come from taking a collaborative, co-ordinated approach that optimizes the combined skills and talents of a multidisciplinary team,” Levine was quoted as saying at the opening of the Escarpment Cancer Research Institute that he founded in 2011, repeating the sentiment that day in his office when he attributed his research success to being “part of a large  group ... of investigators who feed off each other.” In that kind of collaborative environment said Levine modestly,  “you don’t have to be smart,” he said. You have to be prepared to work hard and make sacrifices.”

The self-deprecation is not feigned.  In the wake of the Order of Canada announcement, Levine repeatedly paid homage to the “colleagues, teachers and mentors,” who have helped him along the way. He was fortunate, he insisted to the HJN, to have come to Hamilton when he did and be exposed to “brilliant people” who saw in Levine “this young man has some fire in him” that could be nurtured.

With his career approaching its natural end, it’s the silver-haired Levine who has accepted the responsibility of wearing the mantle of mentor from his predecessors and training  a new generation of oncology residents, who “know a whole lot more than me about the basic science, the molecular biology but need to learn the basics of taking a good history and listening to the patient.” Just as Jack Sibley would have his residents stand quietly at a patient’s bedside to see what they discern about their condition and emotional state, Levine teaches his residents how to talk to a patient with breast cancer, to note her emotions and how they cope.

“Medicine has changed. It’s a lost art,” he said wistfully. “It’s a different way of doing things today — all high tech ... and they don’t teach them enough about the compassionate side, the Osler side.”

That side was on full display in Levine himself during the closing moments of the interview, in when he invoked the image of a 35-year-old patient with breast cancer, “still running a household, still picking up her kids from school.” It’s people like her, he said, who should get the Order of Canada “for their bravery, for their steadfastness.”

Ambition driven by compassion, a love of collaboration — these qualities may have fueled Mark Levine’s long and remarkable career, but they have not defined him, but rather his desire to make a positive difference in the lives of his patients, and his deep sense of gratitude for his family, his colleagues and for doing what he loves.