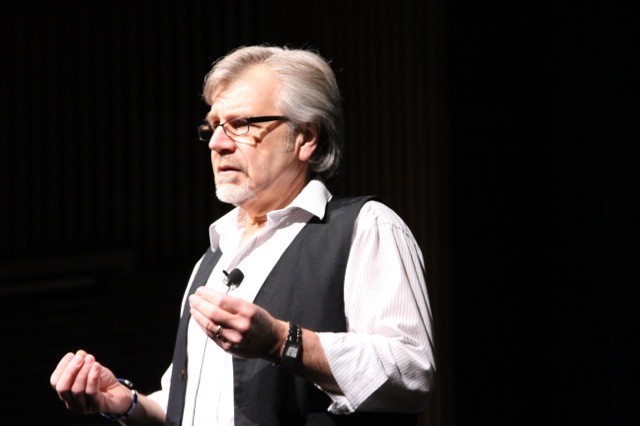 Dennis Nash is one of those lucky individuals who feel passionately about his work. Nash, a high school teacher who specializes in teaching the deaf and hard of hearing, has dedicated the last several years of his life to teaching the Holocaust. Last summer, he traveled to Israel to participate in a three-week intensive seminar at the International School for Holocaust Studies at Yad Vashem in Jerusalem. A Jew by Choice, Nash has been involved with UJA Federation’s Holocaust Education Committee since its inception in 1993. But the Yad Vashem experience had a profound impact.

“I learned so much from survivors, from historical documents, reference materials and visual stimuli,” he said, describing how emotionally drained he felt after actually seeing a boxcar used for transports and a mountain of shoes. But he came away energized with a renewed conviction to continue on the path and on his return, set about designing a workshop for teachers. The deliberately provocative title, “How to teach the Holocaust in 100 minutes,” was coined by Nash and UJA Federation staff member, Elaine Levine, as a way to appeal to teachers who are often at a loss on how to condense such a huge topic into a few short lessons.

Last February, Nash presented his workshop to 30 teachers from both the public and separate school boards. His objectives were modest: to give teachers the confidence and resources needed to teach the Holocaust and provide them with an understanding of how to present it to students in a meaningful way.. Nash himself designed much of the material, including step-by-step lesson plans for grades 7 through 12 and a DVD that highlights the five systematic steps employed by the Nazis against the Jews: legalization; isolation; starvation; transportation; and extermination. An important component of any Holocaust education unit is the teacher’s ability to encourage students to relate the Holocaust to the world in which they live. Unfortunately there is no shortage of examples: Rwanda, Darfur and the recently published poll that cites the three most perpetuated hate crimes in Canada (and Hamilton) are those against Blacks, Gays, and Jews.

When his Yad Vashem colleagues learned about Nash’s work, they asked him to return to Jerusalem this July to present a condensed version of his workshop at the Sixth Annual International Conference on Holocaust Education, attended by an expected 800 participants from around the world. It’s an honour that Nash modestly shrugs off. “I’m just happy to have the opportunity to teach the kids,” he said, making a point of thanking Hamilton’s Separate School Board for giving him time off to pursue his studies and his co-teachers for covering for him. Nash is also grateful to the Asper Foundation which provided funding for both trips.

Perhaps most fulfilling for Nash is the opportunity to witness how his convictions have impacted those around him. As a result of his workshop, a number of teachers struck an ad hoc committee that is currently working on a presentation to the Ministry of Education to request that more time be allocated towards teaching the Holocaust. A better outcome could hardly be imagined.